The front page of the Wall Street Journal this morning has the following headline:

To the side of the article they show the chart on Apple's stock running through yesterday, when it crossed above 600 for the first time after announcing a dividend payment and share buyback program. 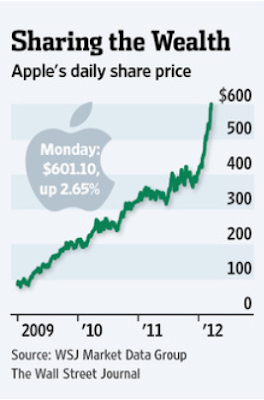 Has this ever happened before with a tech giant?  Yes, the following chart provides the track that Google followed during its multi-year run up to November 2007 against Apple's current move.  Their paths are almost identical. 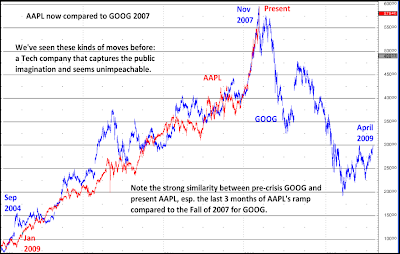 Google also experienced a "blow off top" during the final stages of its run.  It is during this type of move that you want to have your pen and paper ready to write down quotes coming from the media and Wall Street analysts on where the stock is going.

Apple, in terms of company size (due to the surge in the share price), is now larger than the entire retail sector - every company! 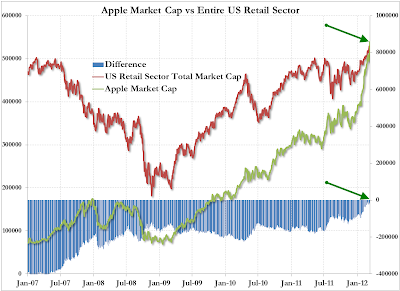 I was playing a poker tournament last night (for charity of course) and my table began discussing Apple stock during one of the breaks.  "How many shares of Apple traded and where did it end the day?"  Then they moved on to Bank of America (I live in Charlotte, home to Bank of America), and one player said he could see the stock falling back to 9 (it has recently doubled from 5 to 10) but sees that as the absolute low.  One said he heard that guy from Texas (Warren Buffet who is from Omaha, Nebraska) was buying so it had to be strong.

I had no comment on the matter. I preferred to listen and learn about the mood of the average investor thinking about and discussing their portfolios.  As I discussed in detail over the weekend in the Global Market Forecast, sentiment is current running at extreme highs.

How do the charts for Apple and Bank of America look to me?  Extremely dangerous.