The most important news for the financial markets in three full years just crossed the tape:

The ISDA has determined that the Greek debt restructuring has been deemed a "Credit Event."  This means that the insurance payments on the debt, known as Credit Default Swaps (CDS), will be paid in full. 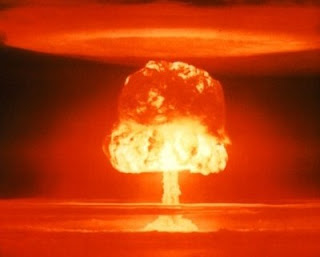 For an easy to understand explanation of what all this means please see The Greece Bailout: Do Not Trigger The Bomb.

The bomb has been triggered.  As I discussed in the article linked above, this is important not due to the size of the Greece CDS contracts outstanding, currently around $3 billion in size, but because it sets the precedent for the coming bailouts for Portugal, Ireland, Spain, and Italy.

These countries have a debt crisis, and CDS contracts outstanding, orders of magnitude larger than Greece.

Many of the banks and hedge funds that issued these insurance contracts did so knowing that they did not have the capital to pay them out if they were ever triggered.

American banks, for example, have told us countless times that their exposure to European debt is very low because they are "hedged."  They are hedged because if a bond defaults, they know they have X amount of dollars coming in through insurance payments (CDS contracts).

But what if the bank or hedge fund that sold them the insurance could not make the payment?  This is exactly what happened when Lehman brothers failed and everyone showed up to AIG's office to collect their CDS contract payments.  There was a note on the front door that read:

"We knew that if the bonds defaulted then we would have to pay out $200 billion, but we only kept $2 billion in reserves. We didn't think home prices would fall in value. We're sorry."

Remember what happened then?  The entire financial system collapsed and it took close to $20 trillion in backstops from the Federal Reserve to keep the system alive.

Here is what makes the story even more fun:

CDS contracts are held "off balance sheet," which means no one knows who owns them or how much they own.  The financial system becomes a minefield that you must navigate wearing a blind fold.

So what happens?  No one trusts anyone.  Money stops moving.

This is why after almost $1.4 trillion in money was injected from the European Central Bank over the last three months, almost all of it has moved immediately back onto the balance sheet at the ECB for safe keeping.  The money is not moving because the banks are scared to death.

The implications for this announcement are beyond massive.  Remember that behind Europe we have Japan waiting in the wings - a monster that is larger in scale than both Italy and Spain.  Investors now have the green light to pounce on Japanese debt through insurance contracts knowing that they will be paid out when the collapse arrives.

What happens next is obviously impossible to know.  If a CDS writer can not make a payment, will the central banks step in and make those payments the way they did with AIG?  The size of the contract payouts for the rest of the European contracts will make the 2008 bailout look like a walk in the park.

This process will take a long time to unfold but we received an enormous piece of information today to help us create the road map for what is ahead.  Right now it is time to raise cash and prepare for when assets go on sale.

I will have much much more coming on this news, including in depth analysis on the size of the CDS markets, which banks and hedge funds will be impacted the most, and an estimate of the scope of the coming bailout (printed money) that will be needed to bailout the system.