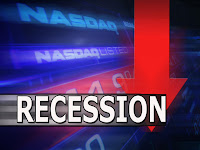 In December of 2007, a recession hits America. Consumers, who were recently pulling out endless cash through their real estate ATMs (refinancing), have stopped spending.  People are now losing their jobs as an economy tied tightly to the real estate boom continues to contract.  Instead of opening new credit cards, Americans begin to do something new - pay down debt (or default on current debt).
Two of Bob’s stores, Nancy’s Nails and Tina’s Tanning, have been crushed by the recession.  With consumers now unable or unwilling to spend discretionary money at their stores, business has dried up.  They both call Bob to tell him that they must close their business and move out.
Bob is now entering the summer of 2008.  With two less tenants, he must pay to heat and cool those two spots, increasing his expenses $10,000 per year. What does his balance sheet look like now?
Suite 1: Harry’s Hardware - $5,000 per month rent
Suite 2: Vacant - $0 per month rent
Suite 3: Vacant - $0 per month rent
Suite 4: Carl’s Cuts - $3,333 per month rent
Suite 5: Arnold’s ABC - $3,333 per month
$139,992 Annual Income
$80,000 Annual Expenses
$59,992 NOI
New building value at a 10% cap rate?  $699,920
Bob took out a loan in 2003 to purchase the building.  He put down $200,000 of his own money and borrowed $800,000 from the bank ($1 million purchase price).  Bob’s loan has a balloon payment due after 5 years (2008) and this year he must refinance his loan.  Back in late 2007 Bob was planning on refinancing his building for $1.2 million (it was worth $1.5 million) and purchasing his vacation home with the extra $500,000.
Bob goes to his bank’s office and shows him that he currently has a $59,992 NOI.  The bank tells him that they require a 1.4 Debt Coverage Ratio (DCR).  This means that using his current NOI, he must be able to pay out the monthly mortgage and have a 40% buffer.
The bank can give Bob a new loan at 6% interest (interest only) for $700,000.  Let’s look at the numbers to show how they got there:
$700,000 * .06 = $42,000 Annual Interest Payment On New Loan
$42,000 *1.4 Debt Coverage Ratio = $54,600 (under his $59,992 buffer)
Bob’s loan currently has a balance of $800,000.  The bank can now only lend him $700,000 to refinance.  This means that Bob has to come out of pocket for $100,000 just to keep his building.
Most commercial real estate loans have a balloon payment due 5 to 7 years after the loan was issued.  In 2008, thousands of owners across the country were facing the same exact scenario Bob found himself in.
On the other side of the transaction, the bank was just as terrified.  They knew that if Bob walked away from the building they would have to take at least a $100,000 loss on their balance sheet.  They had 40 other buildings in their portfolio facing the same exact situation.
In 2008, our financial system collapsed following the failure of Lehman Brothers.  The large banks, pension funds, and insurance companies had hundreds of billions in Commercial Mortgage Backed Securities (CMBS) on their balance sheets.  On top of this, the local banks were home to hundreds of billions of dollars of individual commercial real estate loans.


In early 2009, an already fragile financial system was poised for the knock out blow and it appeared that commercial real estate was going to provide the final devastating punch.  Both the owners of the properties and the banks needed a way to hold on for just a little bit longer to wait for the economy and real estate prices to recover.  They found the solution in a process called Extend and Pretend.
Next: 2012 Commercial Real Estate Outlook: Extend & Pretend