Our global economy runs on the expansion of credit. Since 1970, the credit markets have doubled in size every decade. This massive expansion of debt/borrowing created one of the biggest booms in history - seen in the DOW running from under 1000 in 1980 to over 14,000 in the year 2000, and the real estate markets soaring in prices worldwide from 1997 to 2008 (some markets are still expanding today).

The economy is now dependent on this growth of credit in order to expand in size. Why?  Because you need a larger economy tomorrow to pay off the debt you accumulated yesterday. Does this sound like a Ponzi scheme?  Well, it is.

This is why central banks and governments around the world are desperate to pump credit into the system through government spending, which has been paid for with central banks printing money.

Up until 2008, this credit expansion was handled through the consumers around the world ready and willing to take on more credit card debt, a new auto loan, or a home equity line.  Then, we ran into a problem. When the subprime mortgage crisis hit in 2008 and home prices began to contract, the American consumer and engine of global growth hit the wall. Government leaders went to work to get the credit machine growing again and it appears, based on the most recent data, that they have accomplished this goal.

Zero Hedge provided the following chart this week showing that in the most recent quarter, for the first time since 2008, credit (debt) across all classes increased. Household debt (consumers borrowing), corporate debt (businesses borrowing), state and local governments, and the federal governments all grew the size of their debt outstanding.  The chart below shows this incredible feat: 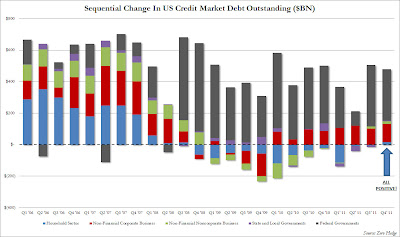 This is excellent news for a global economy modeled around the United States borrowing money and purchasing foreign goods using the debt.  The following chart, based on data released this week, shows that the US trade deficit increased to $52.6 billion in the month of January.  This means the United States imported $52.6 billion more goods than they exported in the month. 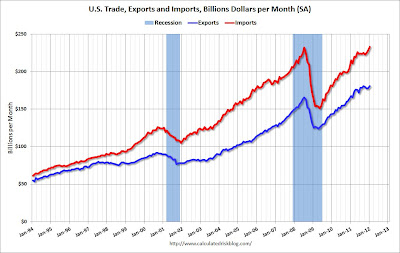 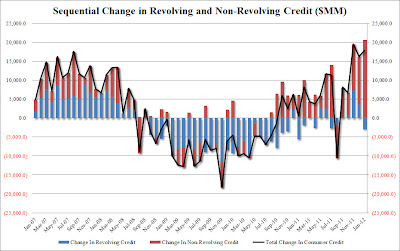 Revolving credit (credit cards) showed a decline in the month of January, but there was a surge in the non-revolving credit driven higher by a portion of the debt markets that has mushroomed in size over the past few years...student loans.

The following info graph shows how the recessionary conditions in America have affected the younger generation.  While 24% have moved back in with their parents, 35% have decided to go back to school. 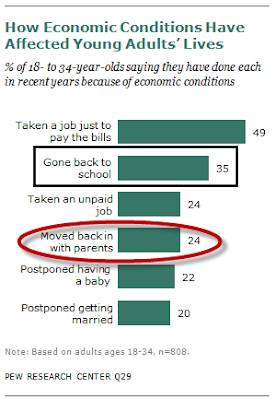 Why are they going back to school?  Because they can approach the government and borrow money to pay for tuition, room, board, books, food, and a little extra for discretionary spending money (partying).  It provides a free way to live while they "wait out the recession."

The following chart shows student loan debt growth vs. household debt growth over the past decade.  You can see where consumers hit the wall in 2008 and passed the baton to student loans.  The rise is extraordinary. 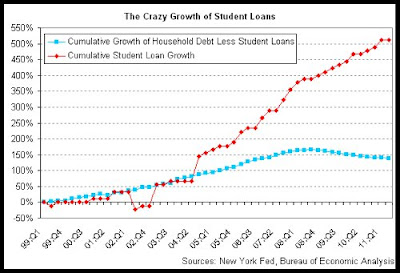 The business of college has never been better.  With an endless amount of federal (tax payer) money available for school it has created a surge in demand which has in return created a surge in college tuition pricing (see 2012 Real Estate Outlook: Demand - Ability for an in depth discussion on how credit availability impacts pricing).  The following chart shows the rise in college tuition prices vs. home prices vs. the standard consumer price index (general cost of living).  You can see the bubble rising and falling in the home price index (red line).  It looks like a minor bump in the road compared to the growing student loan bubble. 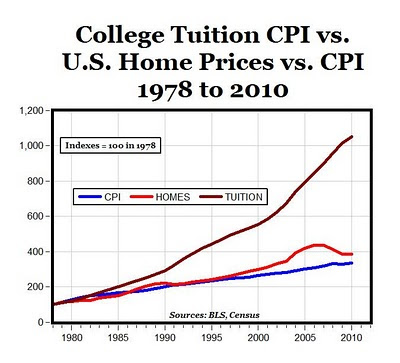 As these college students leave school with tens (or hundreds) of thousands of dollars in student loan debt and find that there are no jobs available, what are they going to do?  In Greece, the unemployment rate for the youth is now over 50%.  They spend their time in the afternoon setting buildings on fire and throwing rocks at the police. Hopefully the youth in America will spend time doing charity work for the local church, but I doubt it.

Some people believe that a war can help put this youth to work and get us out of our current economic malaise as it did back in the late 1930's when a world war cured the Great Depression (or at least that's how the history books have been written).  Something to think about as you watch the slow moving developments with the United States and Iran.

For a much more in-depth analysis on the need for an exponential growth in credit, I recommend Chris Martensen's excellent book The Crash Course as well as taking an hour of your time to watch his Crash Course video series.