Daniel Hannon On Iceland: "Who Is Laughing Now?"

There are many that argue that back in 2008, if we allowed the insolvent banks to fail and allowed the inefficient businesses to fail, then the world would have come to and end.

We do not know the outcome of this scenario because not only did the US nationalize its insolvent banks as well as a large portion of American business (auto, auto loans, and mortgage), but just about all of the remaining developed world did so as well.

Except a country called Iceland.  Iceland decided to let their banks fail and allowed the toxic debt to cleanse from their economy.  They allowed unprofitable businesses to fail.  What happened?

The country experienced a massive recession.  Many people involved in inefficient businesses had to find different jobs.  The country devalued its currency (part of the natural re-balancing of an economy).

Now, after making the difficult decisions and taking the pain in the short term, Iceland is booming.  They have a real economy that is not dependent on the drug of government spending, mortgage financing, auto-loan financing, or transfer payments.

We already know the outcome of the developed world's decision following the financial crisis because we have seen it with Japan.  They nationalized their banking system, massively increased government spending, and embarked on endless quantitative easing programs after their bubble burst in 1990.  After 22 years of slow and steady declines, their economy is ready to disintegrate. 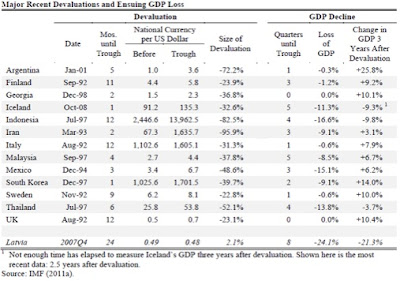