Yesterday, I discussed the employment data released by the Gallup Survey and this morning the government employment data was released.  At first blush, as always, it was a strong report showing 227,000 new jobs created in the month.  This left the unemployment rate unchanged at 8.3%.  The following graph shows the steady increase in jobs created, something that will be drilled into your subconscious every day by the media as we approach election time. 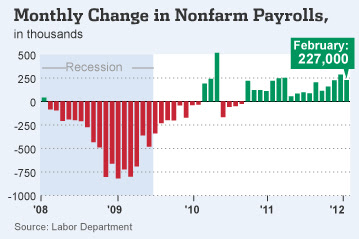 A topic I discussed in detail last month regarding the jobs report was the number of Americans not in the labor force.  These are people who are no longer looking for work, either because they have retired or they have given up because there are no jobs available.  See The Jobs Report: Call The Termite Inspector for a full discussion on the labor force participation and its importance.

Then there are those that are working temporary ("temp") jobs.  Professional business services added 82,000 jobs in February, and 45,000 of those jobs were temp jobs.

On top of the temp jobs we have Americans working part time.  I know what you are thinking. Many of these people would probably prefer part time or temporary jobs which is why they have taken them, right?  The following chart shows the number of people working part time for economic reasons, meaning their hours have been cut or they are unable to find a full time job. 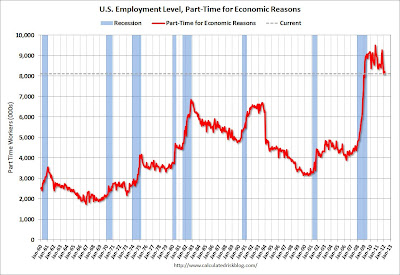 The famous and often discussed "Birth Death Model," where the government conjures up a number of jobs they think were created by small business formation was +91,000 in February.

When you remove the fluff, the true underemployment in our country is much closer to Gallup's 19.1% reported yesterday.  Business owners do not believe in this "stock market" recovery, which has created the surge in temporary and part time workers.