The Fed Hints At QE3?

The market feels that the Fed hinted at Quantitative Easing part 3 (QE3) this morning in Ben Bernanke's speech.  QE means that the Fed prints money to purchase assets.  Up until now it has been only treasury and mortgage bonds, but the Fed has the power to purchase any asset (such as stocks) and probably will before this financial crisis has run its course.

After the hint, stocks and precious metals took off to the upside.  he following chart shows the market reaction after each QE announcement over the past few years.  It also shows the market impact when the artificial stimulus was removed. 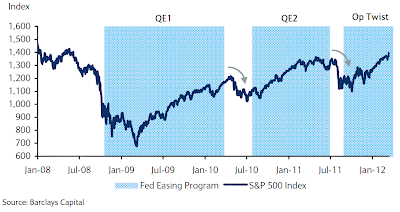 The Fed must now walk a tight rope with oil prices hovering at record highs and other central banks around the world flooding their markets with currency to deal with their own sovereign debt crisis.

The markets are being held up by Bernanke's artificial QE fire power.  Will he push hard now and send commodities (the cost of living) surging or will he let a temporary correction occur?

Speaking of gasoline, it is always interesting to look at the cost by cost comparison of different states in the US.  I live in North Carolina, and I'm always surprised at how much cheaper it is just a few miles away after crossing into South Carolina. 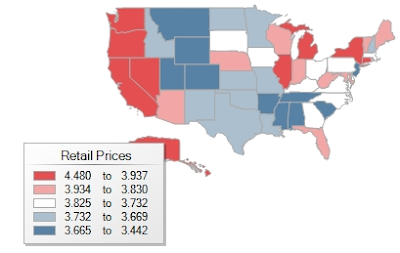 For those in America that anguish when thinking about $4 per gallon, remember that over in Europe prices are close to crossing $10 per gallon.  It appears some of the LTRO (recent "QE like" program from the European Central Bank) has made its way into oil as well. 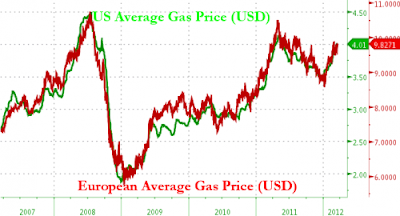