We’ll begin with the current poster child of sovereign debt destruction, Greece, and then work our way out.
Last week, Greece proceeded with a formal default on their debt. They “wrote down” 100 billion euros worth of government debt owed.  That means that hedge funds, banks, pension funds, and mutual funds that once had 100 billion in what they considered assets on their balance sheet vaporized.  It was money that existed in the financial system, but has now disappeared.
This is called deflation: the decrease in money or credit.  Inflation is the opposite: the increase in money or credit.  We will be coming back to this topic, but Greece provides us a recent real life example of this process.
To replace the 100 billion euros of debt, Greece was given 130 billion new euros of new debt.  Does that make any sense?  Of course not.
As part of the agreement to take on the new loan/bailout/debt, Greece has agreed to "austerity" programs - government spending cuts.  This means that their economy, heavily dependent on government spending, is going to contract in size.
This contraction of the total size of the Greek economy (called their Gross Domestic Product or GDP) is already taking place. Greece’s GDP fell by 6.9% in 2011.  It fell by 7.5% in the fourth quarter of 2011.
Investors use GDP as a tool to determine the likelihood of a country being able to pay back the debt it owes. A larger economy means a larger tax base to collect income to pay off the government debt borrowed.
Greek unemployment hit 21% in December and the unemployment for the youth has crossed over 51%. Once the austerity programs go into place it will shrink the economy further and push unemployment higher.  With the economy and tax base shrinking, they will need additional bailouts (more debt) to pay off the debt that is already in place.
Let's now take this simple blue print and apply it to the country next in line for a crisis and bailout.
Portugal
Portugal, who already received their first bailout, has also begun austerity programs.  What is happening? The economy is shrinking.  The overall level of taxable income is shrinking.
Portugal’s government debt to GDP ratio, the most common measure of a country's ability to pay back debt, reached 107% during the most recent reporting (as a quick side note, the recent book "This Time Is Different" studied government debt crisis throughout all of history and found that the magic number when a country begins to enter danger is at 90% government debt to GDP).
Greece is currently at 160% debt to GDP.  This means that Portugal has far more time before they enter a "Greek like" crisis period, right?  Not so fast.
When you factor in the total debt Portugal’s economy holds, meaning you bring in the private sector debt (corporate and household), their debt to GDP is at 360%.  Greece’s total debt to GDP is only 260%.
These means that Portugal is going to see massive deleveraging (paying down debt) from the banks, corporations, citizens, and the government.  Every portion of the economy is going to be shrinking.
The overall GDP is going to continue to contract, making it more difficult to pay back debt at every level. The bond market knows that public debt fails makes its way on to the government balance sheet (especially through the banking system) so they can put all the debt together when putting a price on their bond yields.
5 year Portugal bonds are hovering around 20%, one year ago they were at 6%.
5 year Greek government bonds one year ago were at 12%, now they are at 50%.
After the LTRO (where the European Central Bank pumped $1.4 trillion of new money into the banking system), the yields on Spanish and Italian bonds began to come down as the banks began to put some of the money to work in these markets.  The yields on Portuguese bonds rose, meaning the banks would not touch the debt, even with free money.
Ireland
Many assume that Ireland is close behind Portugal in terms of who the bond market will turn on next.  Why?  Their government debt to GDP has also crossed above 100%, reaching 105%  to end 2011.  Back in 2008, during the financial crisis, the Irish government decided to put the toxic balance sheets of the country’s six largest banks onto the government balance sheet.  This caused the government debt level to explode higher creating the chart you see below: 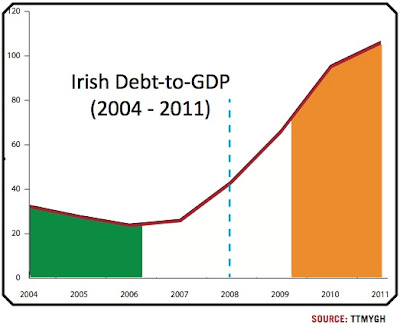 The stock market has priced in the idea that Portugal and Ireland will easily walk through the continuous bail out process the way that Greece has.  Before going along with this assumption, it is important to review what is taking place with the most recent bailout on the political side.
Germany, the main driver of the European economy (and bailouts), has received tremendous backlash from within their own country regarding the continuous funding of, well, everything.
80% of Germans were opposed to the Greek bailout.  On the other side of the negotiation table, the receiving end, at least the Greek citizens are extremely thankful for the handout, right?
Wrong. Greek citizens also hate the bailouts.  Over 100,000 protesters showed up at the most recent demonstration to riot against the austerity programs.
Do you think the German citizens (and the people of Portugal, Ireland, Spain, and Italy) are going to change their opinion of this process as we move forward?  No, they are going to get more angry. This is going to make every bailout more and more difficult politically as we move forward.
Spain
The total size of Spain’s GDP is $1.4 trillion, putting it just behind Russia, Canada, and Italy.  In other words, Spain is huge.  Spain’s public debt to GDP ratio is only 68%.  No problem right?  You already know the answer; we must also look at the other portion of the balance sheet, the private debt.  The private debt in Spain (corporate and households) is an incredible 227% of GDP, not quite as bad as Portugal, but extremely worrisome.
Spanish home prices continue to fall since their property bubble burst in 2008, and the most recent data shows home prices now back to 2005 levels. 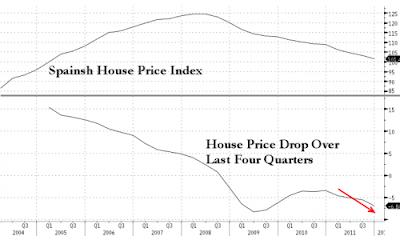 Spain’s unemployment has just reached 23.3% and their youth unemployment is at 49%.  The numbers are worse than Greece, and their real austerity programs have not even begun. The following chart shows the unemployment rates across the European Union. 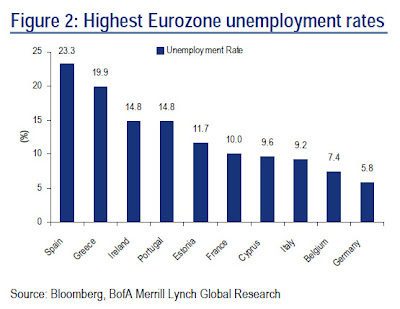 Italy
Fortunately with Italy, we don’t even have to bother with the private debt portion of the balance sheet to see the problem.  Their government debt to GDP ratio already stands at 120% (right where Greece was when they entered free fall).  Italy, like Spain, is a monster in terms of size.  While their government debt to GDP is a disaster, their private debt to GDP ratio is far more manageable than Spain.  They also have a more formidable maturity schedule on when their bonds are due and need to be refinanced. Who will the bond market turn on first?  Only time will tell.
This endless cycle of austerity and economic contraction in the Eurozone is going to shrink the overall size of the European economy, and this will have a major impact of the global economy.
In addition to the political upheaval taking place there is a continuous stream of bank deposits that are leaving the PIIGS countries and moving toward Germany and France.
The following chart shows the European periphery m1 deposit growth.  You can see the money flooding out of the PIIGS banking system,which makes it far more difficult for the already struggling banks within these countries to keep adequate capital ratios. 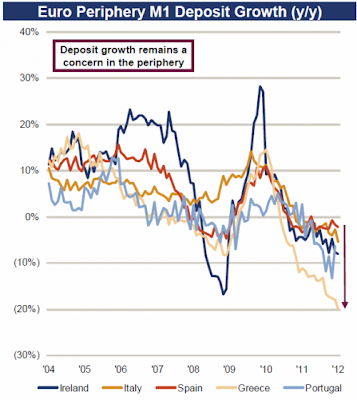 Outside The Eurozone
The data coming out of Japan this year has been troubling.  The economic savior for Japan since their credit bubble burst in 1990 has been their consistent and strong trade surplus.  This helped them fund enormous amounts of government spending, which helped prop up the economy and banking system.
This past year, Japan ran a trade deficit of 2.49 trillion yen ($32 billion).  This was their first deficit since 1980.  Japan ran their highest trade deficit in a month ever in January at $5.4 billion.  The trend is alarming.
This pas week, Japan’s Ministry of Finance officially reported that their government debt to GDP ratio rose by 10% on the year bringing their total to…….230% government debt to GDP.  Japan has, by far, the worst government balance sheet on the planet (Greece is at 160% government debt to GDP), and Japan’s Ministry of Finance was even quoted as saying “Japan is fiscally worse than Greece.”
Is there a country out there that could possibly have a total debt situation worse than Japan?  In order to find it you must run through the exercise we just completed with Portugal and Spain and look at the total debt to GDP the country owes.  When you do this you find the UK, whose balance sheet (after combining both public and private debts) is now approaching 1,000% of GDP. 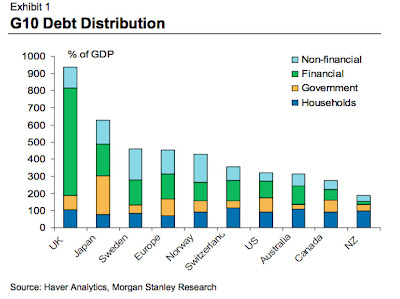 Even a country like Canada, who has a balance sheet far better than any of the countries just described, is moving toward troubled territory.  Canada’s home prices did not deflate when America’s bubble burst back in 2006. 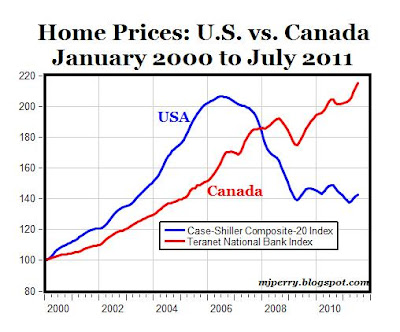 They kept on rising and have now entered into bubble territory in the major cities.  The Canadian people, just as Americans did when they felt their “wealth” rising with real estate prices, have taken on an enormous amount of debt.  Their debt to income level has now reached 153%.  The United States peaked at 160% before our credit bubble burst.  Canada’s economy is growing at only 1%, meaning that the income growth is not keeping pace with the debts the citizens of Canada are strapping on.
China has seen the bursting of its real estate bubble as prices in many of the major cities have begun to free fall.  This will continue to put a drag on an economy heavily dependent on rising property values.  Their banking system is going to need help to deal with the real estate losses coming down the pipeline.  This will impair China’s ability to “bail out the world” as many analysts believe they will.
At the end of 2001, there was $11 trillion in total government debt worldwide. Ten years later, the sum total through 2011 has crossed over $31 trillion.  A 300% rise in a decade.
Government debt is paid for through tax collection. Businesses and consumers (the private sector), discussed in detail above, are now in a state of deleveraging due to the enormous amount of debt they have taken on over the past three decades.  Based on current income levels, they barely have the ability to continue making payments on this burden of debt they have accumulated, never mind the additional $31 trillion the government has added to the mountain.
This is not going to bring the end of the world.  The stock market is not going to go to zero, and people will not be living in caves.  The point of this discussion, as I discussed in the introduction, is that the stock market has not priced in any of the above factors above when forecasting into the future.  If the market was taking all this information in and the DOW was sitting below 7000, we would be having a far different conversation.  The market is taking all this information in and it is about to cross a new all time record high.
This leads us to the United States - the country that not only has financed the most impossibly large mountain of debt in world history, but has financed this debt with an adjustable "teaser" rate loan.
Next: Global Market Forecast: The United States Economy & Stock Market