The Health Of Real Estate: Case Shiller - FHA & Beyond

The Case-Shiller home price data was released this morning for the month of January. It showed an annual decline of 3.9% and a monthly decline of .8%. 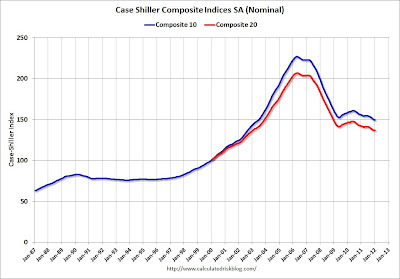 The following chart shows the city by city look at price movement. Atlanta continues to lead the pack downward, falling a staggering 15% year over year. 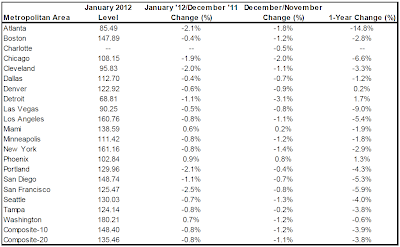 Earlier in the month we received more data on the health of housing. The following graph shows a composite of new and existing home sales, permits and starts.  It helps provide a broader look at all the indicators together. 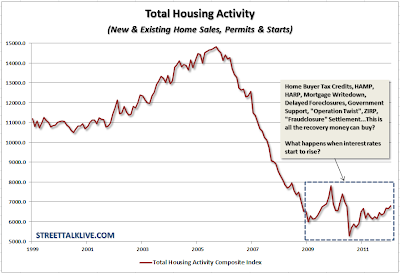 Breaking away from the existing home sales we can just focus in on the new home sales. The steps of the process (in logical order) are: sales, permits, starts (these three were part of graph above) and completions.  While sales, permits, and starts got a bump upward from their extreme lows last month, it has still not had any positive impact on the completions. Part of the reason is that many real estate projects do not reach completion (for multiple reasons) as well as that the positive data has not had a chance to work its way through the python.

From the new home sales portion of the data, we can separate it out even further into multi-family and single family.  After that, you see that all the recent positive data is coming exclusively from the multi-family side, while the single family data remains flat-lined. 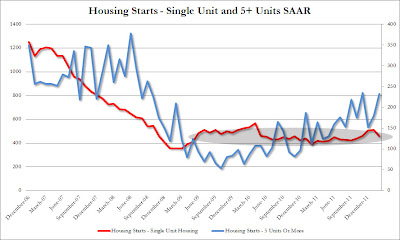 Overall, the (non-multifamily) market remains a disaster.  The following graph shows the mountain of shadow inventory waiting to enter the market - which Corelogic reported at 1.6 million units this month.  This number only includes those that are seriously delinquent (90 days and beyond), meaning it understates the true size of the shadow inventory.  Estimates show that there are over two million homes 30 - 89 days delinquent (a number rising fast) that have not entered this data.  It also does not include the massive number of underwater homes that still continue to make their payments. 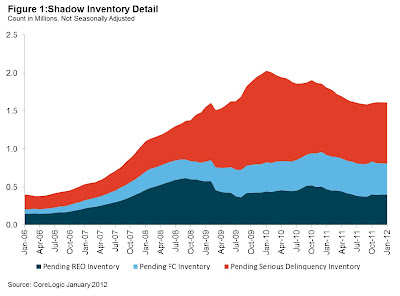 Foreclosure sales were up 29% in January (the most recent data) meaning that some of this shadow inventory is finally beginning to enter the supply stream following the long lull due to the robo-signing scandal.  The lull period as well as the most recent pick up can be seen in the graph below. 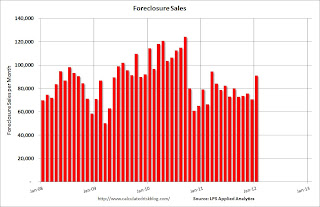 The recent burst of optimism in the stock market has had an unintended consequence on the real estate market - as money has left the bond market and moved into stocks, interest rates have been rising on the ten year treasury bond.  Why is this important?  The ten year treasury bond is the benchmark used to determine mortgage rates which have been rising steadily over the past two weeks from under 4% to close to 4.20% as of the most recent reading.

If this trend continues, it will hurt the ability of homeowners to both refinance and qualify for loans.  Remember, this when commentators discuss the benefits of a rising stock market.

How about the artificial force that is currently holding housing up today: the government backed mortgages that have dominated the market since 2008?

The main driver of growth in this market has been the Federal Housing Administration (FHA), which has seen its balance sheet balloon to over $1.1 trillion (up 300% since 2007) in home financing guarantees.

The FHA lends up to 97% on home purchases meaning any downturn in prices is catastrophic for their balance sheet.  By law the fund is required to hold 2% of its portfolio in cash reserves (meaning if loan values fell by more than 2% they are insolvent), which is a ridiculously low number.

How much did the FHA hold in loan reserves as of the most recent data report (September 30th)?

Yes, that is a decimal. One quarter of one percent in reserves. Why is that?

Their models do not account for the possibility of home prices falling.  Have you heard that before? It is exactly what we heard when Lehman Brothers was leveraged 35 to 1 on their mortgage portfolio, only this time the 1.1 trillion dollar (and rising fast) program is 100% tax payer funded.

As home prices fall these "3% down" loans immediately move under water making it far more likely home owners will stop making payments.  These loans will be added to the current massive shadow inventory and the losses to tax payers will be enormous.

Why does this matter?

If buyers are forced to put 10% down instead of 3%, imagine the number of buyers this will remove from the market as some buyers will be forced to save for a few more years before buying.

This is all a healthy part of the re-balancing of home prices to sustainable levels, but it must be monitored closely for anyone thinking about making a home purchase in the near future.

For an in depth discussion on the Outlook for both the residential and commercial real estate markets see 2012: Real Estate Outlook.