Applying The Greek Blueprint To Spain & Beyond

From October 2011 to March 2012 the European Union spent months holding countless meetings on how they would handle the bailout structure for tiny Greece which represents 2% of Europe's total GDP (think of a small state running into trouble in the US).

As I mentioned both before and after the bailout agreement was finally struck, Greece's bailout itself had little importance on the global financial system. What was extremely important was the first blueprint created for each additional sovereign debt crisis in Europe moving forward. To sum it up in very simple terms the blueprint now looks like the following outline. For those unfamiliar with the terms LTRO and Credit Default Swaps (CDS), I have provided links below that walk through these topics in a step by step, easy to understand manner.

1. Country X cannot enter the bond market and to continue funding its survival
2. EU leaders enter country and demand massive spending cuts in return for survival bailout loan
3. The European Central provides LTRO X to protect bank balance sheets before default/write downs
Behind The Curtain: The European Bank Bailout
LTRO Part 2: Central Banks Are Making Their Last Stand
4. There is a debt write down on current debt with new debt added in its place
5. Credit Default Swaps are triggered
The Greece Bailout: Do Not Trigger The Bomb

It appears that Portugal, Italy, and Spain are all slowly moving together toward the abyss. Just like Greece, they have debt burdens that are suffocating their ability to grow.

Back in late 2010 I wrote an article titled Up Next: Portugal and Spain, discussing that after the Greek and Irish bailouts (which were commencing at the time) that the crisis would move to Portugal followed by Spain. I believed at the time that Italy would follow Spain. In 2011 we found out that indeed Portugal was next as their rates began to follow Greece's upward trajectory perfectly (only 1 year in lag), but it was Italy that moved ahead of Spain in the spotlight.

For a time, I thought Spain was going to be allowed a temporary pass as all the discussion in late 2011 was focused on the Italian bond market. After LTRO 1 and 2, the spotlight has moved back away from Italy temporarily and is now shining bright on Spain (it never left Portugal) meaning that they have once again moved ahead in the race for who is "next."

While Spain's government debt to GDP ratios are not currently as bad as Italy they have many major headwinds crushing their economy. The first is the continuous collapse of their real estate sector, which in turn continues to crush their banking sector, which in turn will need government support (all of which the bond market is eyeing like a vulture).

Spain housing starts are now down 94% to end 2011 (evaporating jobs in this sector) and new mortgages are down 81%. When looking at unsold homes sitting in the country, including bank owned, secondary homes, and unfinished units, estimates place the inventory at 1.5 million. Based on the size of their population, this would be the equivalent of America having 15 million homes sitting for sale.

Spanish home owners cannot walk away from their underwater mortgages like they can in America. The debt hangs around their neck like a noose (this death trap is only seen in America through student loans). Spanish private (non-government) debt to GDP is now at 220%; they are drowning in debt which is a relentless negative driver of growth and government tax receipts.

On top of the real estate market there is regional government debt in Spain, which has risen to 36 billion euros, up 38% since the financial crisis began. As local governments pushed spending higher through bond sales while tax revenues have been plunging it has set up another sector of the market that will need central government support (those living or investing in America which also has bankrupt state and local governments, please pay attention to how this process unfolds).

In addition to the real estate sector and regional government debts, the overall economy (the revenue source needed through tax collection) is a disaster. Unemployment has moved relentlessly higher, now hovering close to 24%. 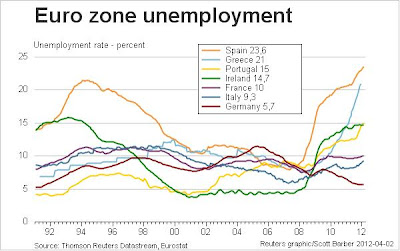 While youth unemployment has moved above 50%: 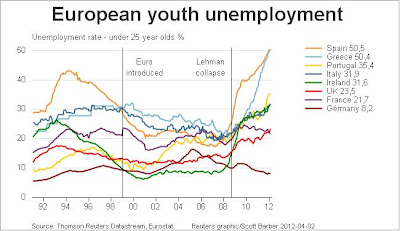 On top of the massive debt losses that are coming for the Spanish banks through the real estate sector, there is another point of interest that is often overlooked by analysts. After the recent LTRO programs, (see above links for explanation) Spanish banks were provided an unlimited amount of free cash at only 1%. We have seen that the majority of the buying of Spanish government bonds (which has pushed the yields downward over the past few months and created the artificial impression that the crisis has passed) has come from Spanish banks themselves.

They have employed a "carry trade" on the money lent, which was the ECB's goal when the program was created, by borrowing at 1% and reinvesting in Spanish bonds yielding 4% or more. They then pocked the spread creating the carry trade.

What is the problem with this? Now that LTRO has passed, Spanish government bond yields are once again beginning to rise. This means that banks that doubled down and went all in on bonds with the cash are now underwater on their investment. If rates continue to rise, they will need massive government support to cover losses on these investments.

The final nail in the coffin of Spain will be the massive government debt issuance in 2012. Spain has 186 billion euros scheduled to be auctioned off this year. These auctions will happen every two weeks. This means that Spain will approach the bond market bi-weekly and beg the market for a loan to survive for just a short while longer.

The first auction of April was a disaster, which sent Spanish bond yields higher and rocked the markets last week. Spain only managed to sell 2.6 billion euros in bonds (remember they have 186 billion needed to be sold this year) and it took rates close to 6% to get the money.

This has the potential to get very ugly, very quickly. Most investors have forgotten about the European situation and now only focus on how high Apple can move the stock market.

Just a quick side rant: Apple is up 48% and has accounted for 20% of the total appreciation in the S&P 500. It now makes up 4% of the total S&P 500 market cap and 11% of the NASDAQ index. It makes up 3% of all hedge fund portfolios. We have hitched are wagon to one star. Let us hope that people around the world continue to purchase every iPhone and iPad that is released.

The sovereign debt crisis will continue to build in Europe, Japan, the UK, and the United States. Central banks will continue to counter this suffocating debt with additional printed currency. The following chart shows sovereign debt expansion vs. central bank balance sheet expansion. It shows the percentage of government debt growth that has been financed with printed money, and it tells a remarkable story. 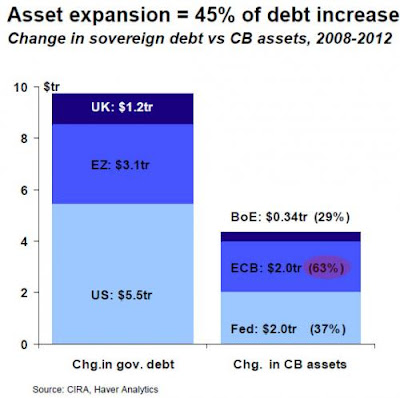 The next chart provides central bank liquidity injections through a timeline showing how they have taken turns "funding" the crisis. It has most recently been the ECB massively expanding their balance sheet through the LTRO programs. Many believe that the Fed is on deck with QE3. 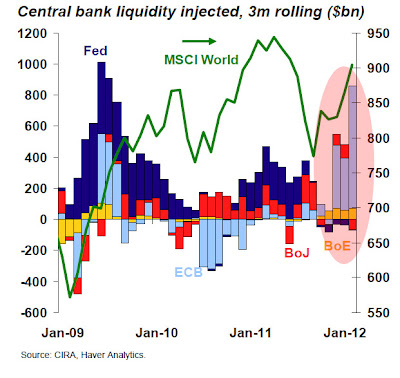 What all this means for gold and silver, which have recently taken a beating in the market due to the "crisis now over," I'll leave for you to decide.