I began reading John Mauldin's fantastic weekly newsletter, which he provides for free on his website, after I finished his book Endgame last year on the global sovereign debt crisis.

This week Mauldin took a look at secular bull and bear market cycles in the stock market, one of my favorite topics and one that I have discussed often because I feel that studying history is a tremendous way to get a glimpse into the future.

Mauldin noted that secular bull and bear markets have an eerie tendency to last 17.6 years, basically to the month. Let's briefly take a look at this phenomenon: 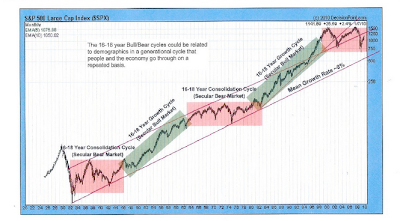 Over the next 17.6 years the DOW entered a secular bull market touching 900 at the start of 1965. Then, another secular bear market began lasting...17.6 years, leaving the DOW still stuck at 900 in the middle of 1982 after being ravaged in real prices through inflation.

In February of 2000 through today we have been in a secular bear market. The  market has essentially moved sideways through long rallies and brief crashes.

Understanding that we are in a secular bear market means we can study from the past to understand how to navigate in our current environment. Similar to the (1929 - 1947) and (1965 - 1982) bear markets, the government is doing everything in their power to intervene and "stimulate" the economy. This creates an underlying layer of inflation in the system that tends to keep markets nominally moving sideways although they are correcting downward in real terms (purchasing power).

Based on history, our current secular bear market in the stock market will end in August of 2017. Looking at how we are progressing through the process that time frame almost "feels" right because governments around the world will do (and currently are doing) everything in their power to slow down the natural process of correction (letting the economy heal), however, this ultimately makes the problem worse and brings the final cleansing crash and sentiment drop needed to create a market bottom.

Secular bear markets do not mean that the market goes down every day, month, or year during the cycle. In fact, during secular bear markets the market goes up 50% of the time. This means you have to pay understand to where you are in the secular cycle by paying close attention to the counter trend rallies like the market is running through today (this differs from a bull market when you can just buy and hold with your portfolio on auto-pilot (1982 - 2000).

One of the arguments analysts and brokers on television (the people who sell stock for a living) argue is that for the past four years average Americans have been pulling their money out of the stock market and putting it into bond funds, cash, or other investments. They argue that this has created a large amount of "money on the sidelines" waiting to take this current (bear market) rally much higher.

Another look back at history paints a different picture. From 1900 to 1950 only 4% of households owned stocks. Think about that for a second because it almost seems impossible based on the world we live in today where every American is told the best financial advice is stocks for the long run in a 401k. In the late 1920's, at the peak of the stock market bubble/mania that roared all through that decade, the ownership levels only touched 10% of the public at the highest point.

Fast forward through to the 17.6 year bear market cycle that ended in the middle of 1982. At this point, over 30 years later only 17% of the American public owned stocks. Stock ownership at that time was considered as crazy; a guaranteed way to lose money after inflation. Bonds at the time were yielding over 15% so there was no need to even risk your money in the "rich man's casino."

This extreme low in sentiment set the stage for the next 17.6 year bull market, but what gave it the rocket fuel was the introduction of the 401k, which allowed contributors (many times matched by companies) to put pre-tax income into the stock market. As the market roared higher year after year, more and more people began to dream of early retirement from their 401k stock portfolio.

In the year 2000 over 60% of the public was investing in the stock mark, reaching a peak of 67% in 2002. It went from a fringe speculation to regular savings. College graduates after 1996 believed that investing in the stock market had always been the way people save for retirement. Television networks like CNBC were created in the 90's to make the topic even more mainstream.

After experiencing two major market crashes (2000 - 2002 and 2008 - 2009) the public sentiment toward stocks over the past decade has declined tremendously from 2000. This is part of a natural bear market cycle. Stock ownership has now fallen to only 50%.

Where do we go from here?

Many believe that as the market moves higher, those 20% that have left the market will come roaring back in. They have already priced this "cash on the sidelines" into their models for growth.

But what if they didn't? Imagine if another 20% left the market bringing the average down to 30% stock ownership - still way above the historical trend.

With baby boomers retiring and terrified of market losses and a younger generation that has only known a bear market, is it possible that the numbers could revert closer to the historical mean?

If you believe that we are in the beginning of the next major bull market then you want to be one of the first to tip toe back into the water. If you follow history and the 17.6 year cycles, then you know after a 100% counter trend rally (which we have just gone through) this is the most dangerous time of all to jump back in.

For Part 2 of this discussion and a look at real time data see Present Stock Market Guides: Is This Time Different?