If A Window Breaks In Spain Does It Stimulate Growth?

For those new to the study of economics (or those that have had the misfortune of taking and paying attention to economics taught at American universities) who wish to get an easy to understand primer on the subject, I always recommend beginning with Economics In One Easy Lesson by Henry Hazlitt or How An Economy Grows and Why It Crashes by Peter Schiff.  The second is told through story form with pictures.

What Austrian economics teaches you is to not only look at the immediate benefit or damage of an economic event or policy decision, but to look at the unseen consequences of the action.

The video below provides a simple story that demonstrates the first lesson of Henry Hazlitt's book.  It shows why destruction does not add to an economy, but takes away from the whole. This concept is easy to understand when you are walked through the entire process, but surprisingly most economic "authorities" today still recommend bulldozing homes to stimulate growth, prices, or wealth.

The second portion of this short video takes this concept beyond to a few of the discussions found in the subsequent chapters of Henry Hazlitt's book, most importantly that government spending is a net drain on the economy of a country, not a net growth or stimulus that we are told today.  Once again, after walking through the simple example you can clearly see why this is the case, but most economic"authorities today still recommend a continuous dose of stimulus and spending from our government.

What the video does not demonstrate, due to time constraints, is that something is different today than when Hazlitt wrote his book many years ago. The difference is that government spending and government taxation are no longer balanced, meaning we no longer operate in the simple zero sum world described in the example above.

In America today, if additional money is spent towards military, health care, and social benefits, it is not reduced somewhere else in the economy because it is taken from tax payers. Why? Because of the magic of deficit spending. If the money is not available, IOU's (bonds) will be issued to make up the difference.

How does this impact the economic model?

Deficit spending allows a country to run longer periods of economic growth, as governments are allowed to fill the gap in spending from the private sector by increasing deficit spending, before pain must be felt by the mal-investments created during the boom. Then, one day, when the IOU's are no longer valid because investors no longer trust the ability of government to pay them in full, you do not have a regular economic decline; you have a collapse.

This is what you see today in Greece.  It is what is taking place in Spain, Portugal, Ireland, and Italy.  For years their economists laughed at the notion of a "broken window fallacy."  There was no invisible hand that would correct the imbalance, until there was.  Now they face collapse.  The following picture, ironically, shows the broken window fallacy taking place today on the streets of Spain: 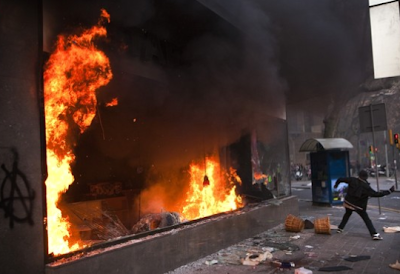 When central banking, derivatives, politics, wars, and financial bubbles are all added into the equation it makes the picture far more blurry and difficult to understand. People who can understand the simple examples provided above start to believe that "stimulus is good." Some will even take the time to go vote for it. For those that can see past the distraction and do the simple math which shows we have borrowed too much as a global financial economy to pay back based on the current income and assets available around the world, will understand why the next twenty years will be different than the last.

In order to get the global debt to GDP ratio down to 180% (Greece was at about 120% when it collapsed), estimates show that the world as a whole will need to write down about $27 trillion in debt.  The following graph shows how big this debt write down is compared to Lehman Brothers and Greece (both of which we are told would have ended the world without bailouts). 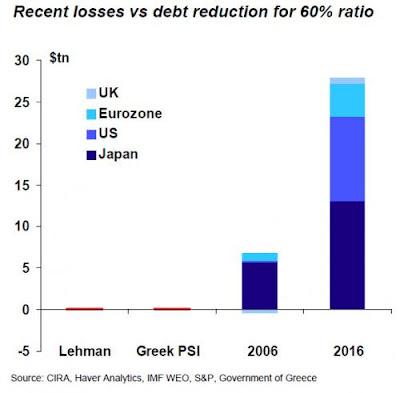 How you think the debt will be liquidated (through default and write down or money printing and central bank balance sheet expansion) should determine how you allocate your portfolio. As I obviously have no idea how it will play out (although I am personally betting on central bank balance sheet expansion), I recommend being prepared for either scenario. I discussed strategies on how to do this in 2012 Outlook: How To Invest.