After looking at a century long view of the stock market in Historical Guides: Stock Market Cycles & Public Ownership to determine that we are in a secular bear market, we now look more in depth at our current situation today to determine if "this time is different."

The common perception from most financial adivisors, financial analysts, investor sentiment readings, and the general person on the street is that America faced a crisis in 2008 which was dealt with and we have moved on. The stock market fall was only a brief stumble, and the economy is now back on track with only higher earnings growth, lower price to earnings multiples, and higher dividends all equaling higher stock prices ahead.

I want to take a moment here to discuss why this time may be different. The stock market is a forward looking indicator (maybe the best leading indicator) because people have the ability to press sell or buy on a keyboard in just a few seconds. Actual indicators within the economy occur on a lag because it takes time for companies to build new factories, higher workers, and increase inventory volumes.

During our current counter-cyclical move in the economy and financial markets which began back in March of 2009 the stock market has led the way forward at an almost relentless pace, moving from 666 up to 1378 where it stands today.

During a normal business cycle the lagging economic indicators will track the market higher as the economy begins to recover. There are numerous economic indicators that track this data such as manufacturing reports and GDP growth. Most of these indicators have moved significantly higher during the recovery, however, this time has been different in that some of the key economic data points that are normally soaring at this point in a recovery continue to weaken. Let's review them now.

1. Consumer Confidence Has Not Recovered

A major benefit a rising stock market has is its impact on consumer confidence through the "wealth effect," simply meaning that if someone sees $400,000 in their 401k they are more likely to take out a loan to purchase a car than if they have $200,000 in their 401k.

The following graph shows consumer sentiment against employment. While they consistently tracked together in the past, during this recovery while the unemployment rate has fallen consumer confidence has not recovered. 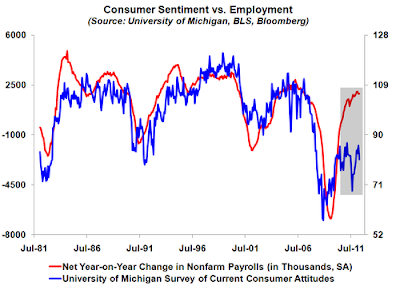 This is important for numerous reasons. The first is that the consumer in America hit a wall in 2008 with their ability to borrow and spend. At well over 200% private debt to GDP, consumers were only able to finance an increase in spending and the ability to pay off previous debt incurred through additional home equity loans (home prices rising) or a rising stock market. When both of those peaked and begin to turn down rapidly, the power of leverage was (and is still today) felt in reverse.

In addition to many people no longer having the ability to spend, many also do not have the desire (the most direct measure of confidence) because they do not believe in the recovery. Many Americans have watched the stock market rally with a very suspicious eye, which is why most have not participated during the run up and still continue to sell stocks today (see Historical Guides: Stock Market Cycles & Ownership for more).

Lastly, looking at the anomaly in the chart above (the most recent divergence) one can also cast a skeptical eye on the validity of the unemployment rate falling.

2. Unemployment Has Not Recovered

The chart below shows the percentage of Americans with jobs: 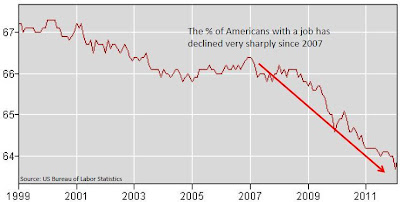 This is the chart analysts and economists should follow when trying to determine the validity of the monthly jobs report. The reason why the number of Americans working continues to plunge while the unemployment rate continues to fall (artificially projecting strength) is due to the number of Americans that have been unemployed so long that they have given up looking for work (no longer counted as "unemployed").

Some will argue that a portion of the number Americans not working is due to baby boomers retiring, and they are correct. However, a retiring worker does not add to the strength of an economy or stock market. These boomers (and they make up a small percentage of the number due to many having to work beyond their ideal retirement age) now become sellers of stocks and bonds from their 401k in order to pay their monthly expenses. They also become an additional drag in terms of social security and medicare costs needed to fund their retirement.

This trend is taking place across a large portion of the developed world (see Japan for an extreme case study). The baby boomer "boom" created during their peak spending earning and spending years (1990 - 2010) has now turned into the "bust" created by their peak savings and social security spending years. While I could write about the baby boomer effect on the economy for days, one of the best studies on this topic was released last year from Harry Dent titled The Great Crash Ahead.

3. Home Prices Have Not Recovered

The last recession in America in 2000 was short lived due to a massive reduction in interest rates from the Federal Reserve and a subsequent explosion in home prices, which stimulated the economy through the previously discussed "wealth effect," home equity withdrawals, construction jobs, real estate sales/mortgage related jobs and all the other side industries that fed off the growth such as cabinet and counter top companies.

The US replaced a stock market bubble with a real estate bubble, but during the most recent downturn home prices have fallen every step of the way negatively impacting the "wealth effect" as well as putting millions of people out of work that counted on the sector.

The real estate bubble has been replaced during this recovery with a government spending and student loan bubble, both of which have combined to form the (final) American debt experiment.

A recent study showed that home prices close to a college town cost $200,000 more than home prices just outside a college area. Why? Students today receive endless amounts of government funds for school and they are maxing out these loans across the board. Offering unlimited student loans allows universities to charge ridiculously high prices knowing that students can pay the tuition with just a few signatures on a loan document. The business of college has never been better. Many of the unemployed youths are now going back to school for a master's degree because they know the student loans are available and they can "hide out" until this temporary recession ends.

The problem with this?

Students who leave school with $50,000+ in student loans (which cannot be discharged through bankruptcy) now have $50,000+ less capital to put toward their first home. This only delays the process of becoming a home owner.

What else is delaying this process?

The harsh reality is that even when they graduate from 6 to 8 years of college with an impossible mountain of loans to pay, there is still not a job waiting for them. So what are these kids doing? They are moving back home with Mom and Dad - another crushing blow for the housing market. The following chart shows the percentage of young adults living at home. Notice particularly the 25 to 34 group (those finished with college) that are immediately moving (and staying) back in the nest. 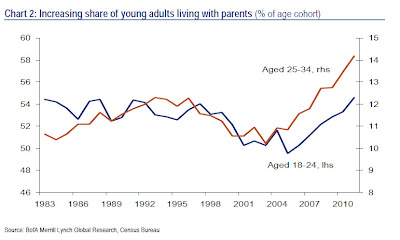 The following shows the stock markets movement through 2012 against how it performed last year. So far they have begun the year on almost identical paths (you may remember the euphoria in the market around the end of April last year). 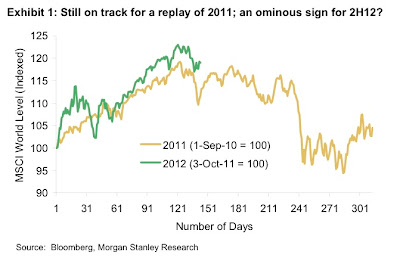 During this recovery the economic data has confused most analysts. While many indicators show strength, others (such as the big three above) continue to show major weakness. Many feel like the following couple when trying to get a gauge on the economy's future: 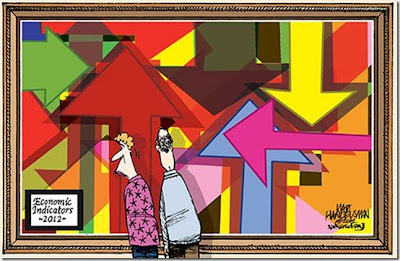 The stock market is rising, but unemployment claims are once again rising and moving back toward the "recession area" of 400,000. Real estate permits and starts are beginning to rise, but a closer look shows that it is only the multi-family sector showing strength: the rental market. Retail stocks continue to rise, but retail spending and confidence remains in depression like states.

Jeremy Grantham, one of the most famous hedge fund managers in history, released his most recent newsletter this past week. In it he discussed that it is almost impossible for a money manager or analyst to remain bearish on the future direction of stock prices if the market has moved up for more than 2 - 3 years, even if all the economic data suggests that there is an ice burg dead ahead.

Because he will lose his job. In America we need to see results immediately. We look at where the stock market finished in a single trading session and then we look to find out what made it move up or down that day (which of course has very little to do with that day's movement).

I do not manage money, and I do not charge a fee for the content on this site so I have the benefit (because I am small potatoes) of having the same freedom that a hedge fund god such as Grantham has been provided. We can tell you exactly how we feel about the markets based on the data, not based on the recent price moves.

For those out there that have a financial advisor who works for a major financial company I would recommend taking a few minutes to read Grantham's letter provided below. It will open your mind to why someone who told you to sell everything at 666 on the S&P 500 is now telling you everything is looking great at 1378.