Over the weekend I discussed three important components of the economy; consumer spending, employment, and housing, that are not recovering to pre-bubble levels and continuing to act like an anchor dragging growth. Today we take a closer look at housing.

The Case-Shiller price index was released this morning for the month of February. It showed a .8% month over month decline, the sixth straight monthly decline, bringing the index to new post bubble lows. Home prices are now lower than where they were a full decade ago, meaning if someone bought into the "index" (the average price home in America) after 2002 they are now underwater.  Obviously those that bought after 2005 are in far worse shape. 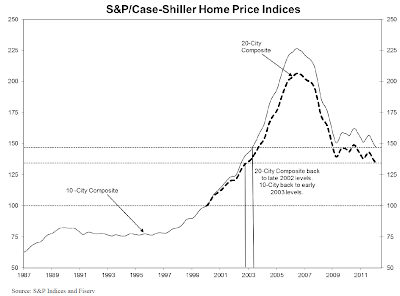 Are we close to a bottom? The answer to that question depends on how well you believe the government can continue to finance new risky mortgage loans moving forward. An FHA loan today allows a borrower to purchase a home with as little as 3.5% down. Housing bulls say that most people will choose to put more down even if the requirement is so low. What is the actual average FHA loan down payment? 4%

Last week Freddie Mac 15 year mortgage rates reached an all time record low at 3.11% seen in the graph below. 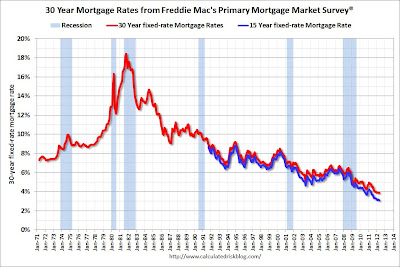 The artificially low rate loans (that will explode like time bombs on Freddie Mac's balance sheet when interest rates rise) are still not stimulating the mortgage demand needed to wake the housing zombie. The following graph shows mortgage applications (demand) against the affordability of loans (lower rates). As rates move lower, more people continue to say they don't care. 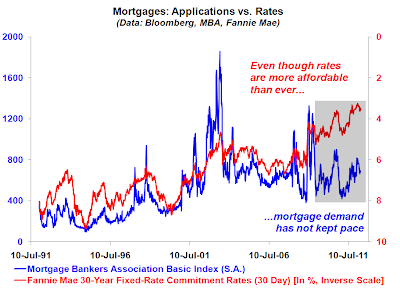 Then there are refinancings which have also seen a slow and steady decline since the 2002-2004 (home equity party) period. 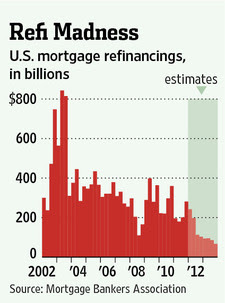 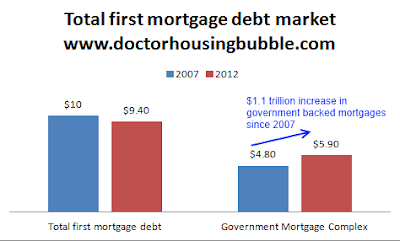 With shadow inventory hidden from view home builders in many areas are once again cranking out speculative homes (building new homes that are not yet under contract with the "speculation" that a buyer will emerge to purchase them).

Last month the Fed ran a stress test on the largest banks to determine what would happen if home prices continued to fall. Their downside estimate? Another 20% decline. Now why would the Fed use such an "impossible" number during a stress test? I'll let you decide on that. 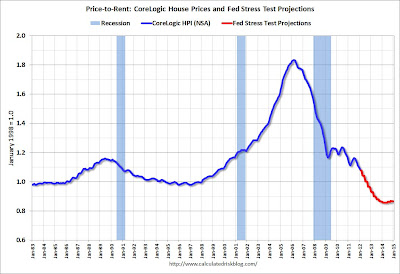 For much more on the residential housing market and the shadow inventory supply see 2012 Real Estate Outlook.