To understand the problems the global financial system faces ahead you can read countless books, data reports, and analysis to put together a very long presentation with an endless amounts of charts. What this long and drawn out process will lead you to is one very simple conclusion:

The world today has borrowed more money than it has the ability to pay back.

However, due to the way our financial system is interconnected today, the decision a small family makes in Japan with their savings has an impact on a business in America. This is a concept known as the butterfly effect (for more see 2012 Outlook: Global Butterfly Effect).

This is why next week I will spend more time focused on Spain's bond market than checking on Apple's share price. I believe an analysis of a particular stock must first be looked at through a satellite view of the global economy. Then once that understanding is put in place (capital flows, trade deficits, currency movements) you can then lock in on a certain country, then lock in on certain sectors within that country, then lock in on certain companies within that sector. Most analysts do the opposite, and it is why they are always surprised when rogue events or "black swans" send share prices off a cliff (or soaring higher).

With that said, let's go back to the big picture:

The world today has borrowed more money than it has the ability to pay back.

The following chart, one that I return to often from Kyle Bass, shows the global debt to GDP. GDP (Gross Domestic Product) is the total size of an economy. Analysts use debt to GDP ratios to help determine when an individual, corporation, or country will enter the danger zone and be unable to pay back what it has borrowed. Carmen and Reinhart in their instant classic "This Time Is Different" came to the conclusion after studying hundreds of years in data that this danger point for government debt was 90% debt to GDP. 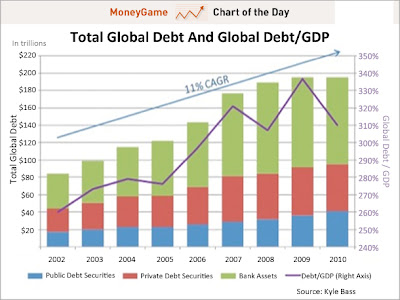 Looking at the purple line above you can see that as of 2010 total global debt to GDP had grown to 310%. This is why bond markets around the world began showing tremendous signs of strain that have only been calmed with an enormous amount of central bank support (much more on that in a moment).

The world is suffocating in debt, and beginning in 2008 investors around the world found out what happened when confidence in this mountain of toxic IOU's cracked. When subprime mortgage borrowers began missing payments it triggered a loss in confidence in the paper promises outstanding everywhere. The following shows the rise in household debt (blue line) vs the rise in household income (red line) in America. When the divergence occurred America became a nation dependent on credit to grow, and when that credit could no longer grow (2008) the country found out that the income was not there to pay back what was borrowed. 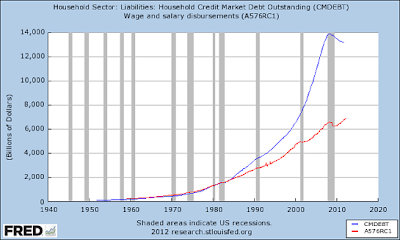 This situation is going to take a long time to correct itself. To help put this chart into perspective, we can bring the timeline back to the 1920's (the previous credit boom that created the Great Depression) to show how far we have left to bring the American economy back to healthy debt to GDP levels. 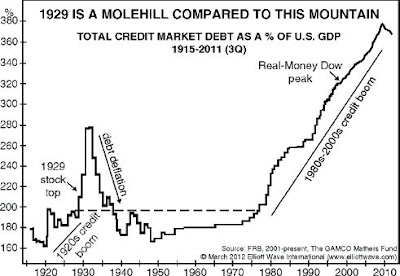 We need to review the charts above because the global financial crisis began on America's shores, but we recently discovered that it was not only Americans who borrowed more than they could afford.

The financial crisis, beginning in early 2010, moved to Europe where it has completely destroyed the economies of Greece and Portugal. The hurricane is now over Spain where it is annihilating everything in sight. We found out this week that Spain's unemployment rate has now reached 24.4% and the youth unemployment is now over 52%. The percentage of those that are "long term unemployed" has surged, and the jobs in manufacturing, construction , and agriculture have essentially disappeared (seen in graphs below).  The unemployment rate in Spain today is now higher than the absolute worst time in the Great Depression in America. All signs point to things getting much worse. 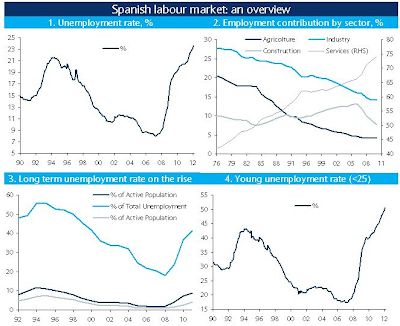 Spain's government debt was downgraded again this week to BBB+.  As I have discussed in detail here in the past, their banking system is insolvent with only the European Central Bank life support to keep it from disintegrating. Spain's housing market, currently in free fall, appears to have no bottom in sight. This will continue to lower bank reserves at a time when money is flooding out of the system through deposit withdrawals.

Spain will have to decide whether it wants to continue onward through this depression trapped in the euro currency or remove itself and default. One of my favorite writers, MISH, summed it up in excellent fashion this week:

There are two major elections over the coming months that may determine whether or not certain countries within the EU remain part of the insane asylum they are trapped within or remove their country and move back to their previous currency. Of these is Greece on May 6th where the debt crisis is front and center.

The second is a country that had been under the radar (so far); France. France's economy is showing tremendous signs of strain as retail sales this week recorded the largest month over month fall ever, plunging from 50.2 down to 41.4 seen in the chart below. 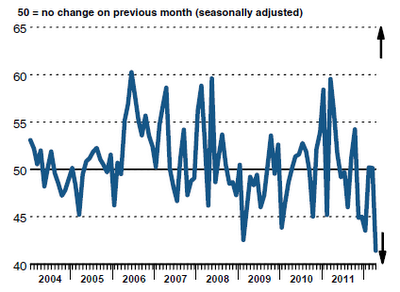 French banks have a monstrous sovereign debt exposure to another country called Italy. Remember Italy? They are the third largest economy in the EU with a government debt to GDP ratio over 120%. When the Italian government bond crisis escalates again (rates have already begun creeping higher) it will put enormous strain on the French banking system causing many banks to possibly be nationalized. This, in turn, will put enormous strain on the French government debt market.....and on we go.

The response to this crisis has been met around the world with the largest display of global Quantitative Easing (printing money to purchase debt) the world has ever witnessed. The following chart shows that over the last five years central bank balance sheets in have grown by a staggering $8 trillion. This only accounts for Europe (European Central Bank), UK (Bank of England), Japan (Bank of Japan), China (People's Bank of China), and the United States (Federal Reserve). 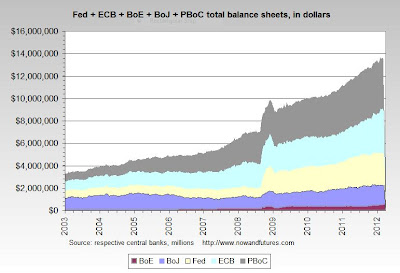 There was $300 billion in balance sheet expansion in the first quarter and over $1.6 trillion in the last year. While most people watch the Federal Reserve with the printer key on pause (for the moment), they are missing that around the world the other central banks have picked up the baton and they are running full sprint ahead.

This has created a currency war, and we are only in the beginning stages. Over the next few years the government bond crisis will move from Europe to Japan to the UK to the United States. Europe has faced problems with monetizing the debt directly due to restrictions put in place when the euro was created. Japan, the UK, and the United States have no such restrictions on central bank intervention. Their central banks have, and will continue, to keep the throttle full speed ahead on QE knowing that any slow down could bring the mountain of debt collapsing down around them.

While there will be liquidity shocks in the months and years ahead, causing over leveraged investors to have to temporarily sell assets to raise cash, I believe the biggest winner in this currency war will ultimately be gold and silver. The market vane index below shows gold optimism soaring during its rise over $1900 last September.  Heavy pessimism has now once again come back into the market as it has moved lower and consolidated over the past 7 months. 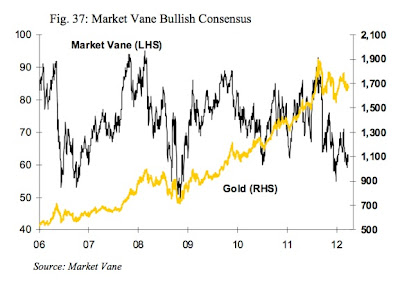 After being large sellers over the last decade, central banks have entered the market and become major purchasers of gold. 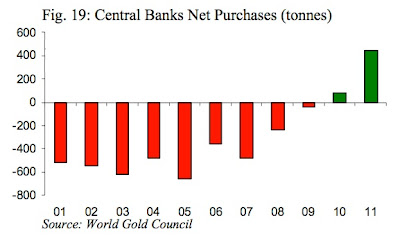 While pessimism toward the physical metal has moved lower, pessimism toward the gold mining stocks has moved into uncharted territory. The following chart, put together by James Turk, shows the number of gold grams needed to purchase the XAU (the broadest gold mining index). It shows that the mining shares, relative to the price of gold, are now the cheapest they have been during this entire bull market. Even cheaper than the liquidation plunge downward during the 2008 financial crisis. 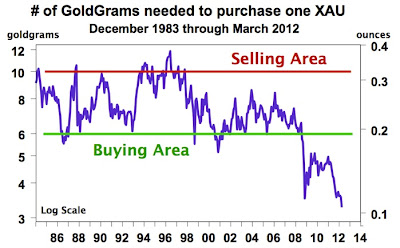 Can these stocks go from extreme undervaluation to even lower levels? Of course they can. If you believe that gold will be priced higher in 3 years then these stocks represent incredible buying opportunities (they are currently priced for a complete collapse in physical gold). Just as with any stock in any sector there are going to be big winners and losers. I recommend doing your research before making any investment decision. Two mining stock newsletters (people that study these companies full time and do not collect money to promote stocks) that I personally subscribe to are:

If you are looking for a specific fund that invests in mining shares I would take a look at John Hathaway's Tocqueville Gold Fund, symbol TGLDX.

The following chart shows the annual price of silver against the broadest measures of the money supply: M1 and M2. M3 is far greater in size than M1 and M2. 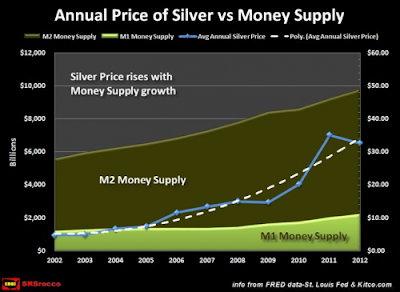 This chart shows how far silver would need to move higher in order to account for the paper money that has been created during this debt crisis so far. The Federal Reserve purchased 62% of all treasury issuance last year. There will be far more printing ahead.

As with gold and mining shares, silver will see tremendous pressure during any liquidation type events the global economy faces. However, based on what is taking place around the world I believe that all three represent tremendous value for a portfolio looking out 3 to 5 years.

If you currently own no precious metals or mining shares I always recommend beginning with physical metal. I personally use and recommend Goldmoney. They allow you to purchase physical metals electronically and store them in safe locations around the world. You can open an account in just a few minutes by following the link below.