Spanish Banks Running Out Of Money

This morning Spain had another much anticipated bond auction. The first offering was 1.1 billion euros ($1.43 billion) in bonds that mature in October 2014.  What does that mean?

Let's say, as a simple example, that you went online with some cash to bid on buying these bonds. The price you pay is determined by the interest rate you are willing to accept in order to lend the Spanish government your money through October 2014.

The actual rate that was bid/accepted was for 3.46% per year. So let's say, for simplicity sake, one investor purchased all the bonds. He will receive 3.46% per year, and in October 2014 he will receive the total 1.1 billion in euros back from the Spanish government. His risk, of course, is that the Spanish government cannot pay back the money because they may be bankrupt (they are, don't tell anyone).

Next up we had an auction for 1.4 billion euros ($1.82 billion) in bonds that will mature in January 2022. The bid/accepted price on these bonds sold this morning ended up at 5.74%. This ten year auction was more important than the shorter dated auction for reasons I will discuss in a moment.

Over the past 6 months there have been two programs called LTRO 1 and LTRO 2.  In these programs the ECB created over 1 trillion euros in new money (they have a printing press similar to the Federal Reserve) and lent it to European banks in exchange for some form of collateral (collateral, for example, could be a bond the bank held on their balance sheet that they would like to replace with liquid cash).

Let's look specifically at what took place with Spanish banks during the LTRO using the excellent graphic the Wall Street Journal had in the lead article this morning: 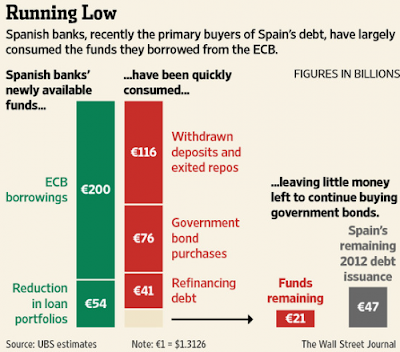 The left green column shows that Spanish banks borrowed 200 billion euros from the ECB. The have also increased their capital/cash with a reduction of their loan portfolio (54 billion euros). This has given them 254 billion in fresh cash to go out and spend. Where has the money gone? This is seen with the red bar to the right.

As I discussed earlier in the week, the major buyer of Spanish bonds this year has been Spanish banks using the ECB's loans. The chart above shows 76 billion euros of the total was used to enter the market, sometimes at bond auctions just described, to purchase debt. This has eased the burden of Spanish debt sales creating the artificial impression that the crisis was over. We'll get back to that in a second.

You can also see in the red line above that 41 billion euros were used to refinance existing debt. The banks themselves, just like the Spanish government, run their business through debt financing. They need to continuously roll over bonds to stay alive. The following graph shows the huge rollover needed in April, May, and June for the Spanish banking system this year. 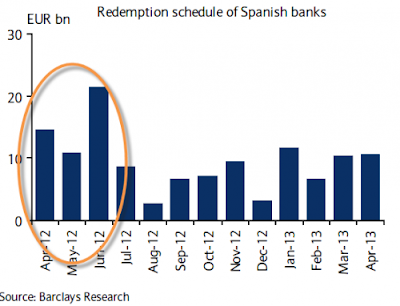 The third huge chunk of the red bar is deposits that have left the banking system. Intelligent Spanish citizens, usually the wealthy and educated, have been slowly and steadily every month removing their deposits at Spanish banks and moving them into banks in France, Germany, and Switzerland.  This is also happening in  Italy, Portugal, Greece, and Ireland. The following graph shows money leaving the PIIGS banks and moving into France and Germany. 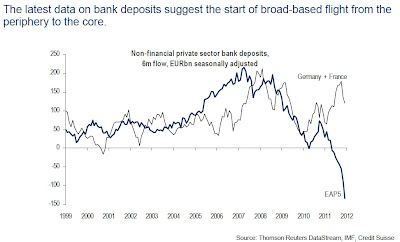 Banks require a minimum level of deposits in order to keep their doors open. When customers show up and demand the money (also known as a bank run which is happening electronically every day in Europe) the banks must find a way to replace that cash. This has (temporarily) been eased by LTRO cash the ECB has dumped into the banking system (seen in the 116 billion euros portion of the red bar).

However, as noted in the graphic above, by looking at Spain as a case study you can see this money is now running out. Spanish banks, in order to continue to raise the needed cash as depositors flee, are going to have to start selling Spanish bonds to raise cash instead of being a major buyer as they have the past few months.

With this buyer gone it is going to cause tremendous strain on future Spanish government bond auctions, which will have to be sold at higher and higher interest rates. Remember that higher interest rates only compound the problem because it creates an additional expense on the annual deficit.

As I mentioned at the top, the ten year auction was important today because the LTRO loans were only provided for 3 years. That means bonds that mature outside this time frame must come from real capital that believes in Spain's ability to pay the money back in the future. The 5.74% yield this morning was the 3rd worst ever and is rapidly moving back to the peak crisis levels seen last fall.

So where do we go from here?

Spain will need to run auctions throughout the year to finance and rollover close to 190 billion euros of debt. The Spanish banking system is underfunded by close to 80 billion euros, and the Spanish government will be forced to backstop the banks if they run into trouble. Regional governments are deeply underwater and teetering on the brink of bankruptcy. The Spanish government announced last week that they will most likely have to nationalize a large portion of this debt.

The economy as a whole, the GDP, is expected to shrink this year meaning that the tax base (income to pay this debt burden) is falling.

Look for the ECB to step back in (with more printed money) with force if rates cross back over 6% and begin to move toward 7%, a point that many analysts feel is the death toll for Spain's finances.

This same process (bank deposit flight, toxic bank loans, local and national government debt financing strain) is taking place simultaneously in Italy. The market has just decided to focus the spotlight for the moment on Spain, although Italy could erupt at any moment and may do so alongside its Spanish neighbor.