The following table shows jobs lost during February 2008 through February 2010 sector by sector. It then shows the jobs created from March 2010 through March 2012 in those same sectors, providing the percentage of jobs that have returned. 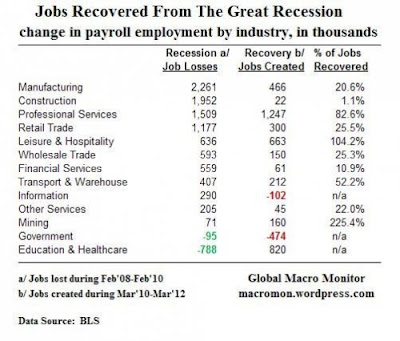 As you can clearly see there have been some big winners and losers. Construction employment has remained in a steady depression with 99% of jobs lost still gone three full years into our "recovery." This is due to the obscene amount of over building that took place in single family homes, apartments, office buildings, and retail centers.

Manufacturing employment has also been through a very rough period with 80% of the jobs not returning. The following excellent graphic from the Wall Street Journal a few weeks ago shows that this is not only due to the economic downturn but increases in productivity (factories continue to use more machines over men). 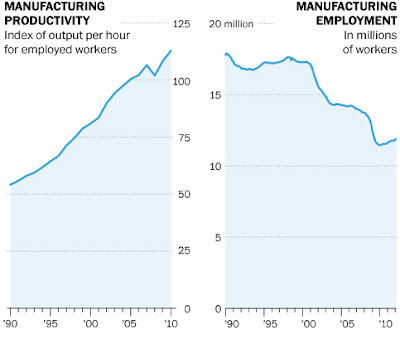 The economic downturn in America has pushed more and more people toward low wage work in order to survive. The following graphic shows that 24.8% of Americans are now moving down toward jobs at McDonald's after discovering that their jobs lost (see list above) are not returning. Click for larger image: 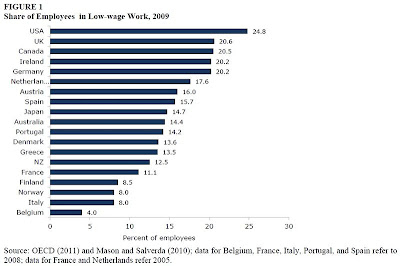 This discovery is also being made by students leaving school. USA Today provided a startling statistic this week: 53% of college graduates (bachelor's degree holders) under the age of 25 are underemployed.

Student loan debt crossed the $1 trillion mark in March of this year. $85 billion of this debt was delinquent at the end of the third quarter in 2011. My guess is that a far greater amount of this debt is delinquent today. This is easy to imagine with 53% of these debt holders underemployed.

The savior for the unemployed during the current depression has been the extended emergency unemployment benefits. Many of the state unemployment rates have declined recently which has created an upcoming "cliff" when these benefits will be turned off. Based on current unemployment rate trends 700,000 Americans will lose their monthly payment in June. 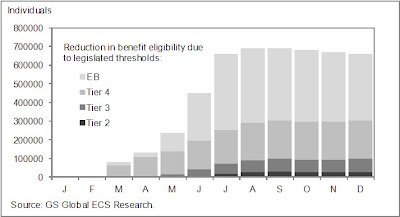 Ironically, what is creating this upcoming cliff is the artificially low unemployment rate I have discussed here often. As more and more Americans give up looking for jobs because they have been out of work for so long they are no longer counted as unemployed. This causes the unemployment rate to fall which has triggered the stop in emergency unemployment benefits in many states.

The second major boost to the unemployed has been living for free. Many Americans have found that when they stop making payments on their underwater mortgage the bank does not call or bother them. Some have lived payment free for 5 years (and counting).

A major delay in the foreclosure process was last year's robo-signing scandal which delayed almost 100,000 foreclosures per month. Ironically once again, this delay in foreclosure processing has created an artificially low supply of homes on the market making some areas feel like there is an actual recovery occurring.

Let me provide a quick real life example of how this shadow inventory works. I live in downtown Charlotte, NC. There is a high rise luxury condo building that was started during the boom (2006-2007) with 408 units. It now sits completed, looking beautiful, in the center of the city with less than 20 people that have closed on condos. It is an empty building.

The Charlotte Observer this week told the story of a couple who put down a $90,000 deposit and is trying to get out of their contract on a two bedroom unit they purchased for $700,000.

This past week the construction debt on the building was purchased by an investor for $100 million, and they immediately filed for foreclosure on the developer. This means they purchased every unit for $245,000.

The downturn Charlotte market is about to see first hand, like a magic trick, what happens when shadow inventory turns into real inventory.  What is the comparable purchase price now for this couple's $700,000 2 bedroom condo? Somewhere far less than $300,000, providing them with a $400,000 loss.

This is how a market naturally heals itself. The investor (based on their past history) will most likely turn the building into apartments. The 400 units of new supply for rent will drive down rents significantly in downtown (Charlotte is pretty small).

This process will be taking place across the country as the shadow inventory continues to become real inventory.

Here's a quick thought experiment for you:

If Americans who were living for free will have to now begin making rent payments, and Americans who have been receiving unemployment checks every month will now collect nothing, what will this do to consumer spending?

Analysts for stock promoting financial companies are in love with retail stocks right now at sky high prices and lofty valuations. We have been told that the American consumer is "back."

Others will take the information above and decide to take a "short" position on retail stocks. These people believe that Americans will lean toward trying to shelter and feed their family vs. purchasing new clothes and hand bags.

We'll check back a few years down the road to see who made the correct investment decision.