As Spain is now collapsing (bond yields at 5.98% and the largest bank shares halted in trading due to prices in free fall) and the media today discussing all the issues we have already presented here previously, it is a good time to take a moment to move back across the pond and look at the status of US stocks. The goal here, as always, is to continue to look forward.

The stock market, after entering the year at over inflated prices and then skyrocketing from there into the stratosphere, appears to have temporarily found a moment of gravity. If this is some sort of short (or long) term top is obviously unknown as dealings with euphoria and hysteria at these levels has only been seen back in 1999 and 2007.

Prices of stocks today are based on analysts assumptions of where earnings will be 12 to 24 months out. If analysts believe that stocks next year will have earnings growth of X percent, then the stock price is bid up to reflect that price today. That is why when earnings are released, even if the company had a strong quarter, the stock can sometimes fall because it was below expectations that were priced into the stock 6 to 12 months before the earnings data was released.

With this understanding you can look at forward earnings estimates and the important profit margins to determine how optimistic or pessimistic analysts are today. The chart below shows where analysts have forecast profit margins will move into December 2013. You can see that profit margins are currently sitting at record (well above bubble level) highs, but the analysts have projected and priced in these margins leaving planet earth and heading toward the moon. 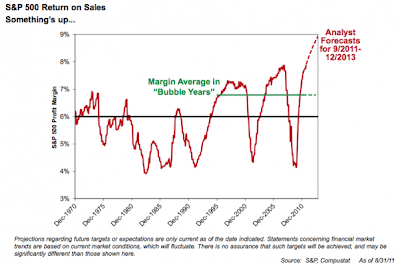 How is this possible? Not only does the overall economy have to have growth surging, but companies themselves have to all have their management and systems creating new ways to lower expenses and increase revenue (profit). Sound like an over exaggeration? Here is the market expectation for the percentage of companies that will increase their margins in 2013. 89%! This means that with margins already at beyond bubble extremes, that 9 out of 10 companies will grow from here. 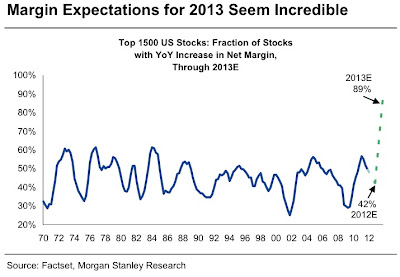 Notice that back in 2009 only 30% of analysts thought that companies would see their margins grow the following year. The stock market was at its lows and the psychology in the market was in the trough. With earnings already coming off a waterfall decline, and companies still having the ability to make major management changes to reduce expenses, this was the time every analyst should have be bullish on the possibility for margin growth.

The market, of course, does not work that way. Because of general herding behavior found in all human psychology, it has the ability to fool most of the participants at its peaks and troughs. I enjoy turning on CNBC for about 20 minutes a day just to hear the discussion on stocks. People are terrified to say that someone should not own a specific stock or market index, which is the exact opposite of how analysts felt at the lows.

Can the market roar higher from here? Of course. And the insanity would grow louder. The small minority that can drown out the noise have had an unbelievable opportunity to exit positions at sky high prices and have even had the opportunity to purchase short funds such as BEARX that would wake up quickly if gravity were to return.