Meet Frankie Smooth. Frankie is a 25 year old real estate agent making a name for himself in the local market. He had a good year over the last 12 months and after all his expenses (which are large to keep his profile up) he has found an extra $10,000 in cash available to invest. Frankie calls his investment advisor and tells him he wants a solid return on the money but does not want to risk it in the stock market. His advisor has just the place: a 30 year treasury bond. It currently yields 3.13% annually and is considered by almost everyone to be the safest investment on the planet.

How many investors, when making a purchase on 30 year bonds, think about holding the bond for 30 years (also know as holding until "maturity)? My guess is very few. They think of holding a 30 year bond for its return over the next year. After that they will decide if they want to keep the money there or move it to another location. Hold that thought for just a moment.

The following table shows the public (government) finances for the worst balance sheets in the world. This chart is different than most because it projects a net present value for items such as health care and government pensions out to 2050. You may have heard these referred to as "unfunded liabilities." You can see on the chart below that the United States is the absolute worst in the world, falling slightly behind Greece. 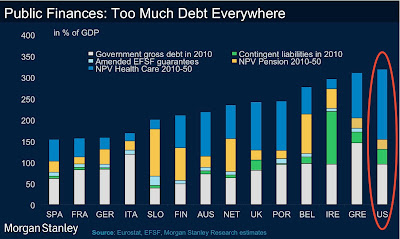 Why does this matter? Who cares how the United States will handle its debt 30 years from now, right? Well, it means very little for someone holding a 6 month treasury bill, but it should be extremely important for someone who is lending the government money for 30 years.

As I discussed above, most average people and financial advisors do not think about it this way. Why? They have become bond "flippers" not investors.

Back in 2004 investors took out adjustable rate loans on home mortgages. Some warned that when the loan adjusted and they needed to refinance after their "teaser" rate period rates could be higher and they might run into trouble. No problem the investors thought, they could always just go to the bank anytime beforehand and refinance if they saw that rates began to move higher.

The psychology becomes a game of musical chairs. Investors today do not understand that if interest rates on a 30 year bond move from 3.12% (where they are today) up to 5% or 6% then they will lose close to 50% of the their money. 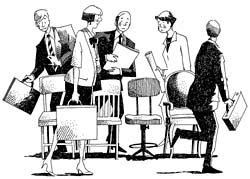 30 year government bonds in Greece today yield over 17%, but you can clearly see with simple math above that the United States is in worse shape fiscally than Greece.

So why would investors around the world put their investments or savings sitting right on top of a land mine?

Some believe that when the building catches on fire they will be fast enough to be the first ones out. They "know" that when the music stops they will be able to find a chair. Others don't even know that they are in danger. Their financial advisor has told them that stocks are risky and bonds are safe (bonds have been rising steadily for over 30 years). Almost no one in the industry was working during a time when bonds were in a bear market (1970's).  There was a similar occurrence in real estate where prices rose steadily for about 50 years heading into 2006. You would have had to find an agent that was 80 years old to find experience with falling prices.

Some investors watching the US spending horror show have decided not to sit in the building covered in gasoline with people smoking cigarettes. One of them is China; formerly the largest buyer of US treasuries and the main source of funding for the US drug/spending addiction. This has (quietly) changed over the past few years with China month after month diverging itself of US paper.

Why has this come unnoticed? Because a new buyer has entered the auctions. The Federal Reserve purchased 62% of all US treasury debt last year becoming the largest US debt holder in the world (over taking China). This has provided a temporary cap on interest rates and allowed the government to push back any discussions on a spending slow down.

While Europe and the UK (who have just entered back into recession) continue to cut back significantly on spending it has caused their economies to slow in the short term.  The United States has kept the pedal to the metal and is pushing the economy full throttle with growing deficits and larger QE programs. This has temporarily created the illusion that the United States has some how emerged from the crisis much stronger than other areas around the world. The US stock market has taken the bait and has "decoupled" from the rest of the world over the past 18 months.

This following graph from the Wall Street Journal shows the US GDP "growth" over the past 4 years. When factoring in true inflation rates, which are supposed to subtract from total GDP, the US actually contracted in the previous quarter. 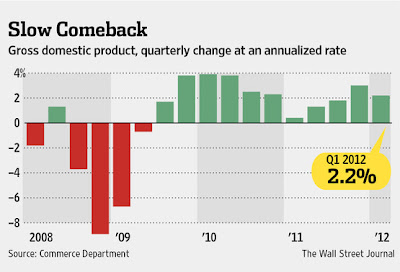 This growth has been borrowed from the future with deficit spending and a printing press. While the US stock market rises and 30 year bonds continue to be the world's "store of value," understand that the professionals know exactly what is happening; this entire recovery is a mirage. They already have one foot out the door.

Over the past four years 401k investors have been removing money from "risky" stock funds and placing them into the "safety" of bonds funds holding 30 year treasuries (bankrupt federal government) and municipal bonds (bankrupt state and local governments).

Some day soon the music is going to stop, and the average investor is going to find themselves once again with the herd scrambling for the exits as smoke fills the theater. My guess is that they are all not going to make it out in time. 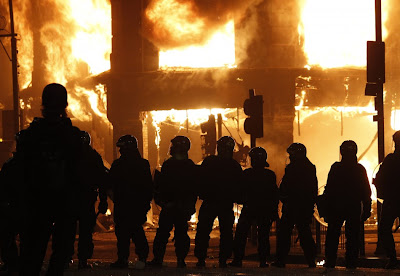 For more on the debt problems facing the rest of the world see Satellite View Of The Global Economy & Investment Opportunity.