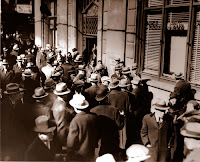 The bank run over in Europe continues every day in a quiet manner. It's only when we receive updates on the actual numbers that we realize how quickly the process is taking place. This is mostly because banking today is handled electronically. Every depositor does not have to stand outside the bank in a line to pull their money. They can sit down at their computer or handle the transaction over the phone. It is an easy process (for now) to move money from Greece into Germany, France, or Switzerland; and that is exactly what is taking place.

The following chart shows total Greek bank deposits from 1998 to present day. You can see the peak in January 2010 just months before news began to reverberate around the world that the Greek government was having trouble paying its bills. The smart money connected the dots immediately and began to pull their funds. Slowly, others have caught on to this process, and it is now turning into a landslide. 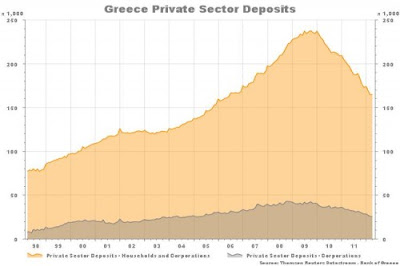 It is not only households that are shifting their cash out of the Greek banking system. The following graph shows domestic households and corporate deposits. It is down 31% from the peak and falling fast. This is how a bank run looks in the modern world. It is seen on graphs, not in pictures of lines outside the building.

While most anticipated this process happening in Spain, the speed at which it is taking place is alarming. The smart money, just as with Greece, has spent the past six months rapidly moving their funds out of harms way. Slowly this trickle is beginning to turn into a flood. We received news this morning that the recently semi-nationalized Bankia has seen over 1 billion euros removed over the past week. The following chart shows Spain's deposits, which have only begun to fall.

Why is this occurring? Let's begin with Greece as it sets the blueprint for the entire Eurozone because all events happen their first. It is looking more and more likely that Greece will have to be removed from the Eurozone because of both political backlash within the country and the cost to keep them on life support from the other members of the Eurozone (who also happen to be bankrupt).

If Greece were to leave the euro they would immediately move back to the drachma currency. Overnight the currency would be devalued significantly. Estimates show this devaluation to be in the range of 40-80%. If a citizen went to sleep the night before the devaluation they would wake up the following morning with X number of drachmas in their bank account instead of euros. These drachmas may purchase up to 80% less in goods than the euros meaning they have lost 80% of their wealth overnight. No one will lose actual paper currency - they will only lose purchasing power. This is a key concept I have been discussing on this web site since day one of its creation. Now we may get to see it play out first with Greece. 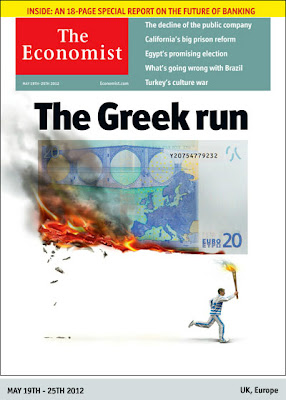 This process is going to take place in Spain, Italy, Portugal, and possibly even France depending on how quickly the contagion spreads. Greece has close to $90 billion in derivatives contracts that will likely default if they are removed from the euro. These losses will then be taken at the French, German, and American banks. Can you see how quickly the contagion spreads with a default?

Greece is only a spec of dust in size in the derivatives world, but it has the ability to take down the financial system all by itself.

For a discussion on how bank runs around the world could impact precious metals see Why Precious Metals Could Surge During A Deflationary Bank Run.