Spain 10 year bond spreads over German 10 year bonds have blown out to all time record highs. What this means is that an investor deciding whether to put their money into either a German bond or a Spanish bond is demanding 4.82% more in interest to take on the risk of investing in the Spanish government. 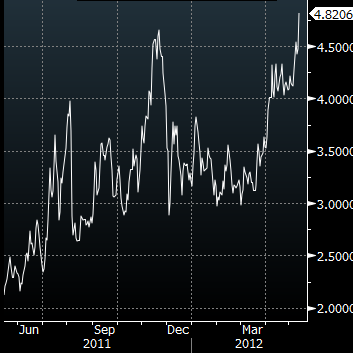 This risk aversion can also be found in the Credit Default Swap market, which has moved up to new highs. This means the cost to purchase insurance on Spanish debt defaulting is now at record levels. 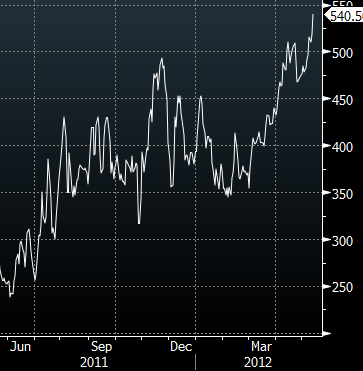 The next graph shows the amount of money the Spanish banks have had to borrow from the ECB in order to survive. You can see that total borrowings were at 100 billion euros back in November and the graph has essentially moved in a parabolic trend higher to over 250 billion in April. 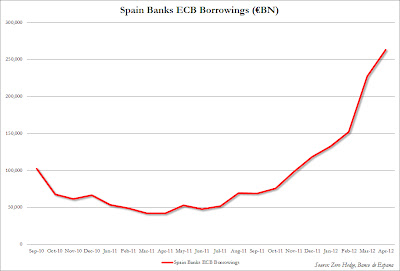 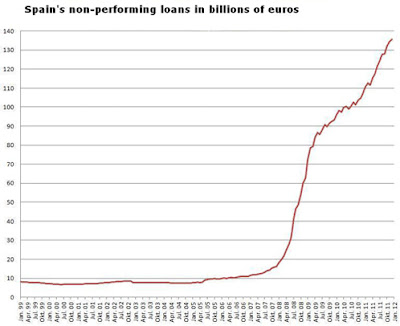 In addition to holding a mountain of toxic real estate loans (creating the graphs above), Spanish banks have spent the last 6 months taking hundreds of billions in loans from the ECB at 1% and using the money to purchase government bonds (pocketing the spread). This has allowed an investor who is smart enough to sell a brief period to exit their position in Spanish bonds. Now the Spanish banks are loaded with both toxic real estate loans and toxic Spanish government loans. The graphs below show this process taking place. The graph on the left shows non-residents holders of Spanish debt plunging (dark blue line) and domestic holders soaring (light blue line). The domestic holders represent the banks.

The same process has taken place in Italy, which can be seen on the graph above to the right. Italy has been fortunate to remain out of the spotlight so far during 2012. This will change after the bond market is finished with their Spanish slaughter. The 10 year bond in Spain is once again firmly over 6% and rising fast. We all wait for the European Central Bank to make its next move. 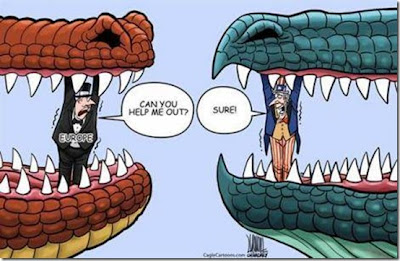