Spanish bonds, which we have discussed relentlessly during 2012 here on this site, once again today crossed over the important 6% line. 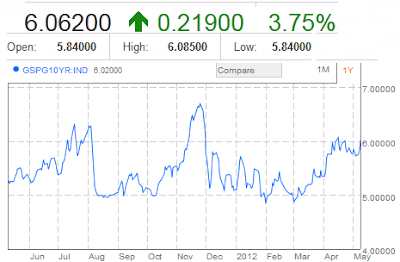 The spread for 5 year Spanish bonds over German bonds (considered the risk free asset of the Eurozone) is now at 4.47%; the highest level since November of 2011. 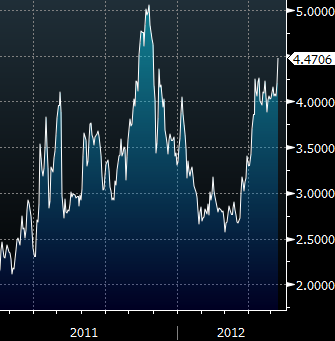 The stock market has now fallen for six straight sessions. Has the market begun to understand what lies ahead for the global economy or is this just another blip on the road upward toward new bubble highs? Only time will tell but here we will continue to focus on the fundamentals which, like gravity, have always won out over time.

This week we received word that small business optimism was up 2 points in April to 94.5, the highest month over month rise in 18 months. Now doesn't that sound delightful?

An investor who may think that headline sounds peculiar during a depression would be correct, and taking a look at a long term chart makes the headline look ridiculous. Just as with new home sales, which plunged off a cliff and have only rise month over month at the bottom of a canyon, the small business optimism index is only higher off of terribly low levels. The chart below goes back to 1985 and shows the dips in optimism during the 1991 and 2001 recessions. Then it shows the decline of our current depression and the rise off the severe lows. 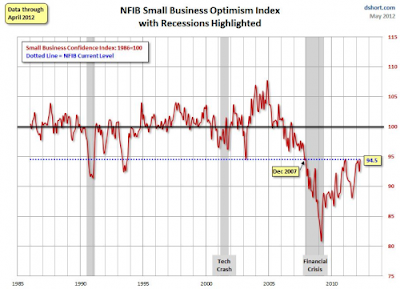 Small business owners have moved from "wanting to throw themselves off a bridge" to "only wanting to close the store and fire all the employees." The highest month over month rise in 18 months.

Another way to gauge the health of the economy is to look at the all important consumer credit. We found out this week that consumer borrowing rose by $21.4 billion in the month of April. $16.2 billion of this rise came from non-revolving credit (student and car loans) and the remaining $5.2 billion came from revolving credit (credit cards).

A closer look at this particular economic "beacon of light" shows something equally disturbing.

The following three graphs show the total growth in consumer credit during our "recovery" (blue line). It is assumed that consumers will borrow when they become more confident. Consumer borrowing means spending and spending means growth.

The second graph looks at one particular part of this credit growth: student loans (red line). The third and final graph shows what consumer credit looks like when student loans are removed (green line). It is collapsing.

Who is providing all this money for these privileged children to attend school? 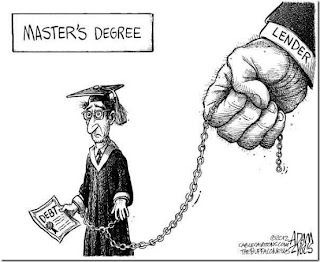 You can see that the chart goes parabolic in July of 2009. Why? It was at this point, 6 months into our current depression, that young American began to realize that there were no jobs available. They turned toward school as a play to "ride out" the recession and get an education during the process. A student loan provides room, board, books, meals, and drinking money for the weekend. It was and is a direct transfer from the government to keep the youth off the streets. Other countries have tried a different path: 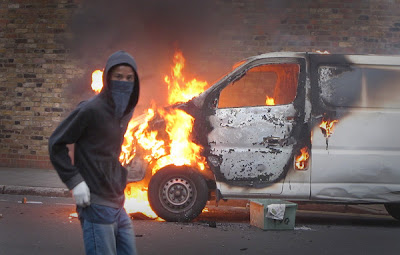 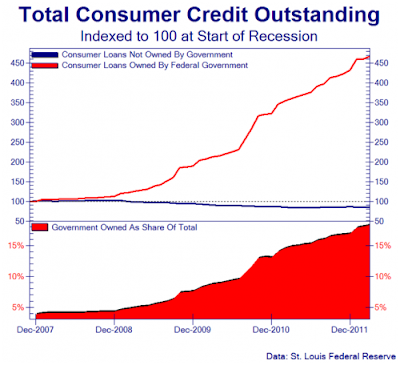 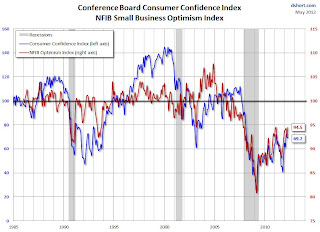 Funding consumer credit through student loans has been one of the largest fiscal boosts over the last three years. College tuition is soaring, real estate prices in college towns are rising, and students are getting free money to party. In a world where deficits don't matter, and the government can stimulate.....everything, life is pretty good.

What if deficits did matter? What if gravity became real not just outside the United States in "less fortunate" places like Europe, but in the US as well?

Imagine the graphic below represents the financial overview for a family that lives on your street. They are friends of yours. The family spends $73,319 per year (total bar on the left), and they earn $51,360 per year (blue section of bar on left). Not bad, only a $21,959 deficit per year (orange section of bar on left) . How do they cover this deficit? With credit cards, which now total $325,781 (orange block on right). 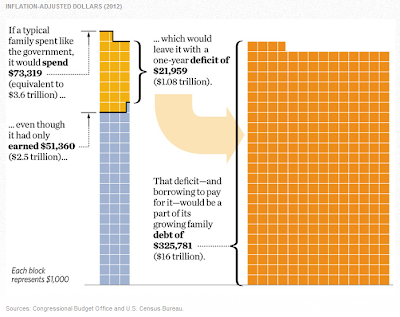 The credit card companies only charge this couple 2% interest per year because they have confidence the money will be paid back. However, if the credit card company began to lose faith in that ability they would begin to raise rates on the debt to cover the risk. They have an "adjustable" rate loan.

This family comes over to your house one night and asks if they can borrow money. They are "good for it" they tell you. They have even gone to the rating agencies and now proudly own a AAA debt rating.

Would you lend money to this family?

Of course not. The couple will obviously never have the ability to pay the money back. This graphic was created to represent the current financial standing of the United States. It is an exact replica, only the United States makes more income and owes more debt.

This afternoon the government held an auction for 10 year treasury bonds, which priced at an all time record low interest rate of 1.85%. This means that investors are willing to look at the financial situation above and lend the government money for 10 years at 1.85%? Doesn't that sound insane?

The following graphic from the Wall Street Journal shows mutual fund flows over the past ten weeks. The light green bars at the top shows money pouring into bond funds, and the bottom (dark green) bars show money simultaneously pouring out of stock funds. The American public, month after month, is piling into the next bubble asset class. 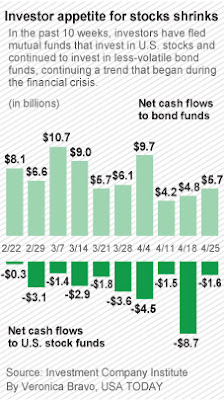 This afternoon, after this graphic was published, we found out that this most recent week saw an additional $6.6 billion move out of stock funds (piling more money into bond funds).

In today's trading session the daily sentiment index for gold reached 10% bullish. This means 90% of investors now believe that gold is going lower. Investors are running scared, and the media has once again (for the 12th year in a row) declared the bull market over.

As no one is paying attention to the millions of lemmings sitting passively on a mountain of toxic bonds, it is up to you to decide which asset class looks more like a bubble.