There is an article in The Telegraph this morning titled: "Spain reeling over financial fears: 'Will my money be safe?' ask customers in Madrid banks."

This bring up an interesting thought experiment. The citizens of Spain that connect the dots now understand that the Spanish banks are currently underwater; meaning their toxic real estate portfolio losses if marked to market exceed their reserves and deposits. They have been kept alive with liquidity injections from the European Central Bank and a quasi government backing.

Last week one of the largest banks in the country, Bankia, was nationalized instantly when it ran into trouble; similar to Fannie and Freddie in the United States back in the summer of 2008. The government now stands behind both the deposits and the toxic assets.

They do this to create confidence, which is the model our entire financial system is based on. However, it is not difficult for a Spanish citizen to figure out that the government that is backstopping their deposits is now being called into question on its ability to finance operations in the debt markets. If the government cannot raise money in the debt markets, who stands behind the average citizens deposits at the bank?

The people of the United States watch this taking place on their television sets and are appreciative that they have no such worries in their country. American savings deposits are backed by something called FDIC insurance up to $250,000. This means if you have $250,000 in a savings deposit at the bank you have "nothing to worry about." If the bank should ever fail the FDIC will immediately arrive and backstop your savings.

How much money does the FDIC have available to backstop the deposits? In the following chart the blue line shows this number, which was a consistent $50 billion leading into the financial crisis. They get this money by charging all banks an annual fee for the insurance. It  is like a big savings account. In 2008, as banks begin to fail rapidly, this money was quickly used up and the FDIC went into the negative for 7 straight quarters. This means they have to borrow from the federal government in order to stay alive. 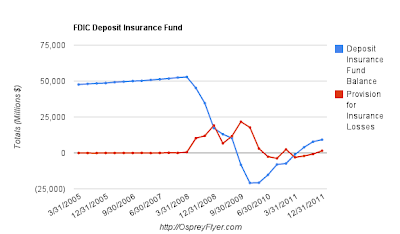 The FDIC today has just over $9 billion available to backstop America's deposits. With this $9 billion, what is the size of the total deposit base they are in charge of protecting?

Think about that for a moment. If just a small amount of Americans felt that their money was not safe (see the headline above in Spain) they would enter the bank and begin pulling deposits. The FDIC would be out of business in about 15 minutes.

What stands behind the FDIC? The federal government. Ah, good. But wait a minute, doesn't the American government rely on borrowing every month just like Spain in order to pay its bills?

If there was a run on the banks in America the savings accounts are only backstopped by the federal government's ability to enter the debt markets and borrow $5 trillion. In a world where governments are are already loaded with debt and face problems of their own where would America find a buyer for this debt? 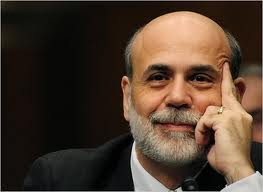 This type of thought experiment is something that 99.9% of people (fortunately) never walk through. For a system based on confidence, ignorance is bliss. I personally hold my savings in the form of physical precious metals which have no counter party risk; meaning they do not rely on some other entity's ability to pay. Today I am considered very strange for doing so, but I would imagine more and more people in a country like Spain or Greece (or any country with insolvent banks backed by an insolvent government - see Portugal, Ireland, Japan, or the UK to name a few) have come to the same conclusion as I have.

If you would like to store a portion of your wealth in physical precious metals that can be moved electronically like a bank account, the company I use and recommend is called Goldmoney. You can set up an account in just a few minutes by following the link below. The time to purchase insurance is not after the building has caught on fire as the people of Spain will soon find out. For more on the speed which deposits are leaving troubled European countries see: Modern Day Bank Run In Europe.