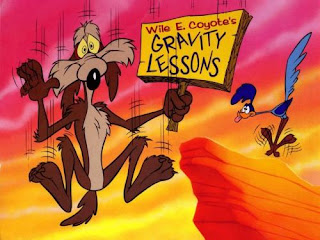 Looking beyond the US stock market at the global stock markets shows that the MSCI global market index peaked in April and has been falling steadily for the past 30 days. Stocks are now falling in unison around the world.

Commodities peaked on April 22 and they have been falling line with stocks. The index was crushed further this week as oil prices continue to take as massive beating - falling to $83 on Friday. The CRB Index below shows this longer term decline: 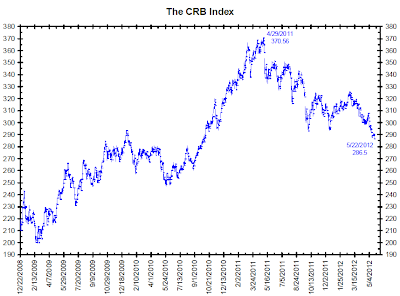 Up until Friday morning precious metals were part of the commodity decline. For an update on where we are in the real estate cycle see Home Prices Reach New Lows.

With money moving out of stocks, commodities, and real estate around the world where is money moving right now? Bonds. And it is moving there with massive force.

The 30 year US treasury bond finished the trading day at 2.5%. The following graph provides a long term view of US treasury long term rates going back to 1790. We are now moving down toward the 2.09% record seen in the 1940’s when the Federal Reserve held interest rates artificially lower for almost a full decade.

The 10 year US treasury bond reached 1.43% on Friday: the lowest return in over 220 years of data, meaning they are now priced higher than any time in history.

This dynamic is playing out around the world as investors move back into “risk off” mode. Money is crowding into the short term debt of what is perceived as the safest government balance sheets and currencies. The following shows the return on a two year German government bond moving into the negative in Friday’s trading. This means investors now pay the German government to hold their money for the next two years. 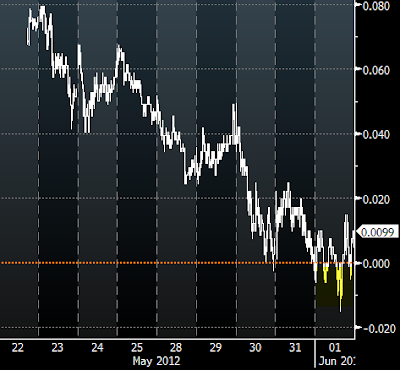 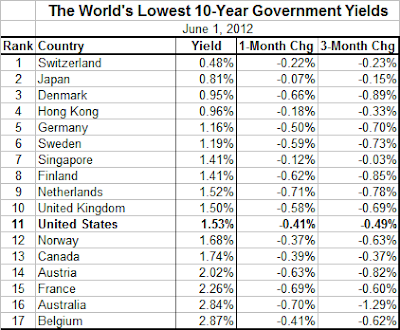 This dynamic can be seen even more clearly through a longer term view of the two year yield in the US, UK, Japan, France, Canada, and Australia in the graph below. Investors charged these governments close to 8.5% per year to use their capital back in 1990. Today they lend governments their money at no charge. 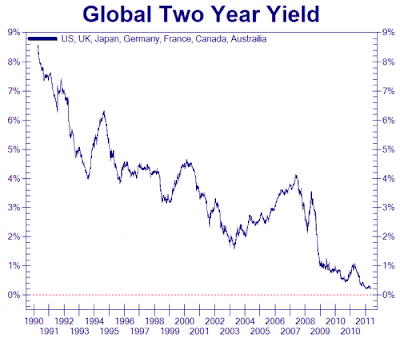 For the past four years, the average investor has removed money from the “danger” of the stock market into the “safety” of bond funds. In addition to pension funds and insurance funds increasing their bond holdings, regulations are being put into place to force banks to hold more government bonds - this is part of a process known as financial repression (for a complete discussion see What Is Financial Repression?)

Now that we know how we got here and have a benchmark of where the markets are today, let's look at possible policy responses to the global downturn and what is means for asset prices in the months ahead: