The global financial system is now more interconnected than ever. What happens in a trading room in London now impacts the workers in a factory in China. This is known as the butterfly effect - a concept I discussed in detail in 2012 Outlook: Global Butterfly Effect.

Entering the year, the yields for government bonds in European economies were falling due to the impact of the European Central Bank’s LTRO program. (For a detailed explanation of the LTRO program see Behind The Curtain: The European Bank Bailout & LTRO Part 2: Central Banks Are Making Their Last Stand)

Fast forward to today and Spanish government bonds are once again approaching the 7% mark, considered by many the “point of no return”, where they will have massive difficulty funding both their current and future payments. Italy has tracked higher along with Spain, quietly moving into the danger territory.

Greece continues to be an ongoing disaster. Before Greece’s bailout in March (discussed in detail here) the country had 368 billion in government debt outstanding. The bailout forgave 100 billion of this debt and simultaneously provided a 130 billion euro rescue package (additional debt). This gives Greece a current debt total of close to 400 billion as their GDP continues to shrink in size month after month.

They lurch forward as a zombie country today based solely on life support with no access to the debt markets outside the current bailout system. Based on the information in the paragraph above, a 5th grader can understand that their current situation is now worse than before the bailout and they will need continuous help moving forward.

As part of the bailout package, the Greeks were forced to agree to “austerity programs” which means spending cuts. These cuts come at a time when the economy is already in deep recession/depression based on the unemployment numbers and negative GDP growth.

The people of the country are obviously upset. Polls show that Greeks do not want austerity cuts, but they do want to stay in the euro. Both of these cannot happen simultaneously and which direction they choose to move in the months ahead will have an enormous impact on their political polls and the global economy.

In the meantime, while their general public decides on whether they would like to remove themselves from the euro currency or not, depositors have decided not to wait. Money has been fleeing the Greek banking system over the past six months at a relentless pace, moving into the safety of German and Swiss banks. The following chart shows this silent bank run taking place: 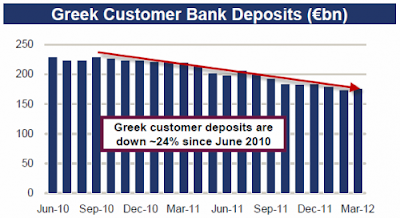 While the Spanish bond market has not quite reached the dire levels of Greece, the Spanish citizens, corporations, pensions, and financial institutions have connected the dots and have already begun moving their money as well.  The month of April saw a 31 billion euro outflow from the Spanish banks.

The deposit outflow only compounds the problems the battered Spanish banks face with their mountain of toxic real estate loans resting on the balance sheets.  Bankia, one of the largest banks in Spain (after already merging with other toxic balance sheets), announced over the past few weeks that they will need a bailout of 19 billion euros ($24 billion) in order to survive. The current bank bailout fund in Spain has only 5.3 billion euros available. Where will the government find the remaining 14 billion euros when they are having trouble financing their current deficits? This is an excellent question.

Estimates have already begun to emerge on what type of bailout package/firewall would be needed to keep both Spain and their banking system alive. An EU/IMF bailout package to cover their funding needs through the end of 2014 (enough time to temporarily calm the markets) would need to be 350 billion euros in size, 75 billion of which would be used to recapitalize the banks.

Standing behind their banking system is the balance sheet of the European Central Bank (ECB), which is currently leveraged at 36 to 1 and has mushroomed to over $4 trillion in size.

Up to this point the ECB has not begun to monetize assets directly as the Federal Reserve has over the past few years through various QE programs. The ECB has created programs that exchange assets in return for cash. The problem is that European banks are running out of assets. Europe will soon reach the point where either the ECB must monetize debt directly or their entire massively leveraged banking system with both real estate and government toxic debt will collapse on itself.  The following chart shows the continuous decline in European banking stocks, now down 50% from July 2011.

What lies next for Europe? Forecasts for unemployment continue to rise across the board. 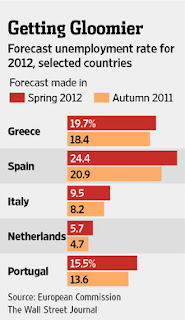 Deposit outflows appear to be picking up speed and the bond yields of Portugal, Spain, and Italy continue to move slowly toward the abyss. Political battle lines have been drawn between “Austerity vs. Growth” on how to deal with the future.

My belief is that in the short term, the people of Europe will continue to vote for anyone who tells them they are against austerity and for both increasing government spending and “stimulating” the economy through this rough period.

As recently as a few months ago, both France and Germany were vocal supporters over the need for austerity across Europe. As the French economy begins to slow down and their banking system (which holds a massive amount of Italian government bonds) continues to deteriorate, they have slowly changed their tone and moved toward “growth through spending.” 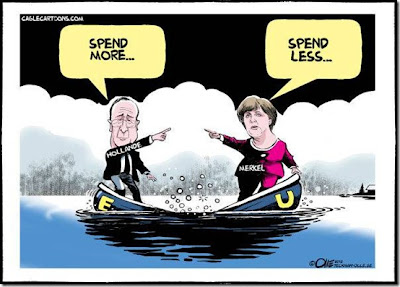 In the meantime, while the politicians argue back and forth, the rest of the global economy is feeling the pain of the European slowdown. The butterfly effect is now once again front and center.

Up Next: The Butterfly Effect Returns