I am not a financial advisor. Please speak with one before making any investment decisions.

As discussed throughout this outlook, the global economy is now exclusively dependent on the ability for credit to grow in the financial system. If credit begins to contract, as it is in many parts of the world today, it tends to infect other parts of the global economy through the interconnected nature of our financial system, a concept I like to call the butterfly effect.

Our discussion has also reviewed that the former driver of credit growth around the world, the American consumer, has hit a wall in their ability to borrow. Since this dynamic began in 2008 we have seen governments around the world unleash massive stimulus programs (growing credit) and this has occurred simultaneously with central banks purchasing an enormous amount of debt to keep interest rates artificially low. These lower rates have allowed many troubled borrowers to refinance and new projects to come online  that otherwise would not (known as mal-investments).

These investments will face their judgement day at some point in the future when interest rates eventually rise off their artificially low (close to 0%) levels. Many commercial real estate, residential real estate, mergers, acquisitions, financial trades, and business projects have taken on a tremendous amount of debt over the past few years using models that show interest rates staying low forever. They will not, and these investors and investments will be slaughtered in the years ahead.

But we are getting ahead of ourselves. That is a much longer conversation for another day. You want to know what is coming next.

With the former engine of credit growth unable to grow, a projection toward the future should be based on the policy response from both governments and central banks around the world. These are the last remaining entities capable of additional leverage and credit (for now). It seems strange to look at the world this way, but I assure you that the stock price of a company over the next six months is going to be determined far more by how the central banks of the world take action vs. how that company's management team takes action. We live in an economy that is floating on hundreds of trillions of dollars in credit that is floating on over a quadrillion in derivatives contracts.

So let's begin with the United States. The US is currently in an election year meaning that the ability of the leaders to come to a compromise that would bring a large scale stimulus program is very unlikely. This means that through the remainder of this year the burden rests exclusively on the Federal Reserve.

The Fed needs to have a large asset price sell off before they can make their move and based on how the markets have moved since May 1 it looks as if they will get it. The most important asset class for the Fed when looking at their ability to take action is oil. The cost of gasoline at the pump is something that stays in front of Americans every day. It not only makes a major impact on discretionary spending, it has a major impact on inflationary expectations.

People do not talk about inflation running high at dinner parties when the price of copper or sugar goes up, but gasoline is something that they can constantly measure and quantify. Oil has collapsed over the past 5 weeks with the slow down in the global economy. Touching over $110 a barrel just a few months ago, it is now moving close to the $80 mark.

In addition the Fed will be watching the stock market. Bernanke has discussed the "wealth effect" many times in the past (describing consumers likelihood to spend when stock prices are higher) and has even used rising stock prices to justify his actions as a success.  The key question is; how big of a sell off in the market is needed for the Fed to make their move? The following shows the Fed's intervention in the market during each sell off during the past four years and its effect on the stock market. You can argue that they have "bought" a total of 1,150 points on the S&P 500. 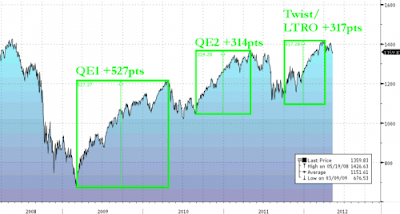 The Federal Reserve has monetized (printed money to purchase) 60% of the increase in treasury and GSE (Fannie/Freddie) paper since 2008. The following graph shows this amazing level of activity in the market with the Fed's purchased highlighted in red. 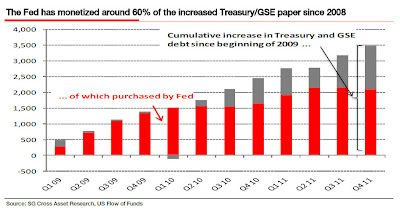 I believe that the Federal Reserve will announce QE3 at some point this year. The program will be focused on both treasury and mortgage bonds. They have very little tools remaining in their box beyond purchasing these bonds. During Bernanke's helicopter speech in 2002 he discussed the Federal Reserve entering the stock market to purchase equities, but I don't think we are quite at that point (yet).

Europe is now waiting on the next major bailout program to prolong the collapse just a little bit further. The truth is, once you have looked at the situation from every possible angle either the European Central Bank (ECB) will step in with major force (even greater than their massive LTRO program) or the ship is going to go down. At the end of the day when their backs are against the wall I believe they will print. Remember that entering the weekend before Lehman's bankruptcy American politicians (and the central bank) were in agreement that no more bailouts would occur under any circumstance.

When Lehman failed it opened the door to hell and the world was able to gaze in. Will they need a "Lehman like" bank or country to fail before they have to political will to unleash the ECB on the markets? Maybe. This is the problem with trying to forecast a market not based on economic analysis, but the whims of political decision making.

How about the rest of the global economy?

China, as we discussed in detail, is in serious trouble. While a complete discussion on how I expect China's government to react is beyond the scope of this outlook due to the length of time it would take to explain the China-US currency/trade relationship, let me try to explain it in quick and easy terms. In order to keep their currency pegged to the United States the Chinese central bank must mirror the actions of the Federal Reserve. If the Federal Reserve unleashes QE on the markets this year, China must do the same, a concept that few market participants understand.

Australia and Canada are two countries in similar circumstances. Both have experienced an ongoing boom in their real estate market that allowed them to recover from the collapse of 2008 at a much faster rate than the rest of the world. Australia's housing bubble has just begun to burst (a topic I will cover in great detail in the months ahead) while Canada's has not yet rolled over (making it even more dangerous). Other than their coming problems in their real estate markets they have strong government balance sheets and export driven economies. Australia is heavily dependent on both Japan and China for exports meaning that while all emerging markets will suffer they will be hit extremely hard in the coming global downturn. Brazil, while having slightly different characteristics than these two markets, is also in a very similar situation.

How will their policy makers respond? Currency devaluations and stimulus programs.

Japan, just like America, is currently receiving the benefit of money moving rapidly out of the Eurozone and looking for a home. Their currency and their bonds have both appreciated significantly, something that is only partly welcomed due to their export led economy. What no one is discussing or looking at today is that Japan is the next sovereign debt crisis, and they will make Spain and Italy look like child's play when it begins. Until that point, however, their underlying rot will remain undiscovered by the markets. For much more see Japan Government Bond Disaster: The Storm Cloud Approaches.

Before they enter their coming crisis, Japan's central bank will continue to both intervene in the currency markets and the financial markets through QE programs as they have been over the last two decades. Japan is further along than the United States' QE programs in that they are already printing money to purchase stocks.

Now that we understand that the global slowdown has arrived and have an understanding of how policy makers are likely to respond we can look ahead at how a portfolio should be constructed.

Entering the second half of the year we are now in a slightly different situation. The stock market has now sold off for a full month and the index has just crossed into negative territory for the year. With stock prices moving lower, as we discussed in depth in the introduction, people can "see" that there may be some trouble ahead for the economy. Sentiment levels have moved much lower.

Does this mean this is a strong entry point for the stock market? I don't believe we are there yet, although, I would not recommend taking a short position with sentiment levels this low. Only after major rallies with high sentiment during secular bear markets (something we saw in March and April of this year) do I recommend actually betting on prices falling.

I have said since the spring of 2010 that you want to hold on to current positions and raise new cash. Nothing has changed since that point (other than a brief green light to purchase additional precious metals back in December). You want to put together a shopping list of attractive assets you want to own for when they go on sale during a deflationary sell off. For example I personally like:

Are any of these assets cheap enough today for me to be purchasing them today? Yes, I have been purchasing the past few weeks silver and specific precious metals mining shares (although the mining shares have recently exploded upward in price over the past week making me more cautious to enter here). Other than making purchases in those two specific assets, I continue to raise "safe" cash while I wait for the others to go on sale.

Oil and agriculture are close to what I believe are good entry points for long term investors looking for businesses that generate dividends through these commodities. The DBA ETF in the 22-24 range, and oil in the mid to low $70's would give the green light to begin accumulation.

I have closed my short position on the stock market that I took on in April. If the market rallies and sentiment begins to get back to frothy levels then I will bring the shorts back on.

This list above is not for everyone. These are the assets that I believe are in long term secular bull markets. I believe that the stock market is currently in a cyclical bull market (which may have just peaked), part of an overall secular bear market (for much more on secular cycles see Secular Bull & Bear Stock Market Cycles Back To 1870).

I believe that the bond market is currently in the final stages of the greatest bubble ever. More money will be lost over the coming years in the bond market than in the stock market and real estate bubbles of the last decade combined. I will spend much more time discussing the dangers of bonds in the months ahead.

If you are looking to add precious metals to your portfolio, I personally use and recommend Goldmoney. You can open an account in just a few minutes and begin storing metals electronically in safe vaults around the world by visiting the following link: