Richard Duncan’s most recent book The New Depression (the best book of this year) did an incredible job  explaining how both the United States and global economy have become dependent on credit growth for economic growth. The inflection point came in 1971 when the world moved off the gold standard and all currencies began to float against each other, backed by nothing, allowing an unlimited amount of credit to be created.

And grow it did. Between 1971 and 2008, the United States economy saw a credit expansion from $1 trillion to over $50 trillion. The impact this had on global economic growth cannot be overstated. It allowed a massive global stock market boom (1980 – 2000) followed by an even larger global real estate boom (1997 – 2008). In some countries, such as Canada, this real estate boom even continues today.

The American consumer took on an unprecedented amount of debt in order to finance an enormous consumption binge. Home equity lines were withdrawn to purchase new kitchens, vacations, clothes, and electronics. An unlimited amount of credit was provided at 0% interest to finance new car purchases. Anything remaining to be desired could be financed through credit cards. And it was.

Then in 2008, the ability to finance this debt, in many cases through borrowing additional debt, reached the breaking point. Since the 2008 financial crisis, the US consumer has entered a massive deleveraging period where they have paid down (or defaulted on) credit cards, auto loans, and mortgages. Taking on more debt or opening a credit card, once the trendy thing to do, has now become uncool.

The following shows total household debt through the first quarter of 2012. All categories of debt continue to fall month after month, except one (which we will get to in a moment). 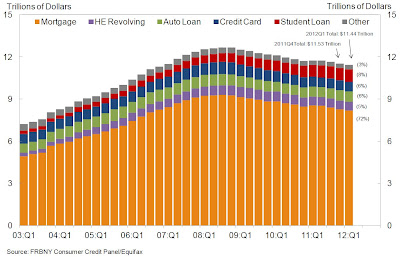 The main reason why debt can no longer expand is that income growth did not rise with the borrowing binge of the past few decades. We will discuss both income and employment in the next section.

You may have read in the headlines recently that total consumer debt has been rising and it has. It rose by $21.4 billion from February to March - the largest month over month rise since November of 2001.

The problem is that almost all of these gains have come from only one sector: student loans. While the American consumer has continued to pay down mortgages, credit cards, and auto loans, they have opened the floodgates with student loans. 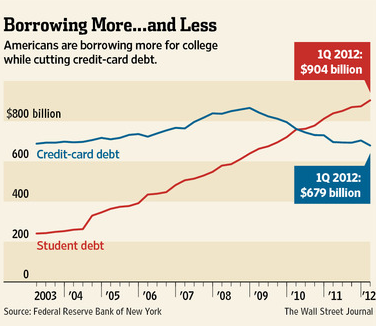 Since the peak of household debt in the third quarter of 2008, student loan debt has increased by $293 billion while other forms of debt have fell a combined $1.53 trillion. The following graph helps paint the picture of the exponential growth in this market. 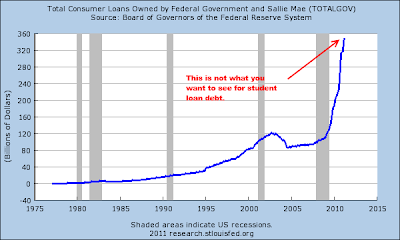 This massive surge in debt (along with federal government spending which we will get to) has provided a form of the “economic miracle” in the business of education. The unlimited amount of money has allowed tuition prices to soar to unimaginable levels and real estate construction and local businesses to boom in college towns.

The problem, just as the Chinese have recently found out, is that someone needs to actually pay back the money that has been borrowed. Student loans that are 90+ days delinquent have surged to 8.7% in the first quarter, a number that is higher than the peak in mortgage delinquencies. The government essentially took over 100% of this market back in 2010 through its Sallie Mae vehicle (think Fannie Mae for student loans). As these loans continue to sour, Sallie Mae will need a massive injection of tax payer support.

Why are these loans beginning to go bad? The income is not there to support the payments. How do you create income? Employment and wage growth. We will now look at both.

Up Next: US Employment & Income