Gold Market Review: Where Are We Today?

Heading into tomorrow's Fed meeting, after reviewing Art Cashin's thoughts on possible announcements, I thought it would be a good idea to review where we are in the current bull market for gold.

I have long believed that the final price of gold during the mania stage of this bull market will be tough to determine in terms of dollar price in advance of its final parabolic move up. It is best to try and forecast this number by comparing gold against historical peaks in previous bull markets, specifically the early 1930's and the late 1970's.

During both bull markets the DOW to Gold ratio reached close to 1 to 1. This means you could purchase the value of the DOW with one ounce of gold. In order for that to occur today, the DOW would need to fall to 1619 (gold's price as of this writing) or gold would need to move up to $12,837 (the DOW is currently at 12837 as of this writing). Most likely they will meet somewhere in the middle so you can see that we still have a long way to go in both the stock market's secular bear market and gold's secular bull market (which both began in the year 2000 and most likely have about 4 to 5 more years remaining).

The following graph shows the DOW to Gold ratio moving toward its bull market bottom after falling from 44 in 2000 to only 8 today. It is following its normal cycle process as all secular markets do. 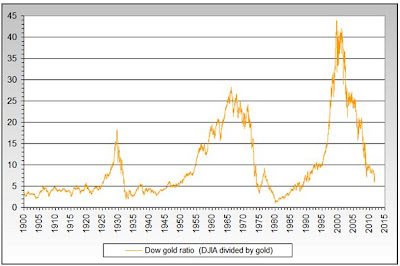 A second measure of where we stand in the bull market is the price of gold related to the total amount of money (credit and currency) in the financial system. In the 1930's and for a brief period in 1980 gold moved high enough in price to "account" for all the new money and credit that had been created.

The following chart goes back to 1915 showing gold's most recent "accounting" in 1980. Based on the recent monetary expansion during the QE programs the price of gold is close to the historical lows of the past 100 years - accounting for less than 20% of the money in circulation. 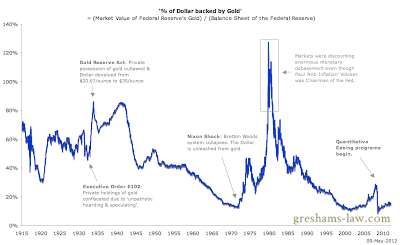 The following chart shows how far gold would have to rise to fully back the monetary base today - $8,500 an ounce. It divides the US monetary base by US official gold holdings. This was how the government determined the $35 gold price during the Bretton Woods agreement back in the 1930's to fix the dollar to the price of gold. This only includes how much money has been created thus far, it does not include any new announcements or additional printing Bernanke may announce tomorrow or in the future. 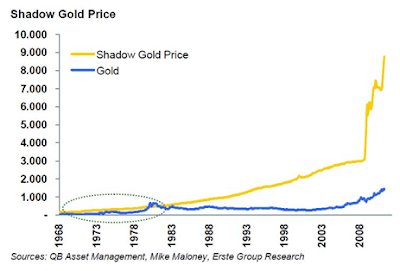 The base money supply only looks at a fraction of the total money supply because it does not include credit. While the base money supply is just under $3 trillion ($8,500 gold price), the total credit market as of the 1st quarter has grown to $54.58 trillion; a new record high (after a brief decline following the credit crisis). The following chart (blue line) shows the staggering long term growth of credit:

Deflationists will argue that credit will contract significantly in the years ahead and that any central bank stimulus provided thus far is only a small hose being poured into an ocean when you look at the entire credit market (this is correct). They believe that the central banks will not have the political will to keep the mountain of credit growing in the years ahead (debt default will outpace new money creation). They may absolutely be correct on that point as well.

When looking at the entire credit market ($54.58 trillion) + the base money supply (m1 which is just over $2 trillion) the price of gold today would need to be $53,000 today to 100% account for the total money supply as it did back in 1980. This is not some pie in the sky fantasy number. It is basic math that can be done with a pencil and calculator.

If the worst case scenario that the deflationists foresee occurs and total credit contracts (due to debt defaults) by 50% to only $27 trillion, then gold would only need to rise to $26,000 an ounce to complete its basic accounting as it has throughout history.

In any possible future scenario gold is undervalued today in terms of its price vs. the money supply. My guess is that the final chapter of this bull market will bring a move greater than any mania we have seen in history. Do not be discouraged if prices fall in the short term. Continue to accumulate.

For more on precious metals and deflation see Why Precious Metals Could Surge During A Deflationary Bank Run.