Will The Coming Student Loan Crisis Be Worse Than Subprime Mortgages?

The following graph shows the growth of federal (taxpayer funded) loans to students from 1995 through today. As you can see the chart has now become parabolic, similar to a subprime housing graph from 6 years ago. 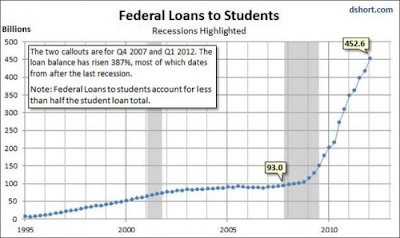 Student loans have now become the largest asset the federal government owns. The blue piece in the pie graph below shows that student loans now compose 34.7% of the total through the first quarter of 2012. 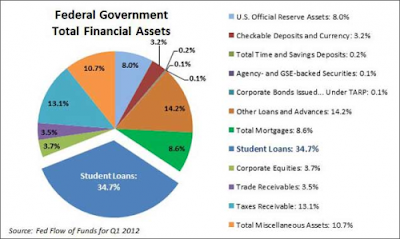 It is commons sense that the student loan crisis will be a complete disaster, but will it be worse than the subprime housing crisis? Professor Antony Davies of George Mason University argues why he believes it will.

For a more in depth discussion on student loans, sovereign debt, and asset price direction in the months ahead see 2012 Second Half Outlook.