During an interview I posted earlier today with Jim Grant on CNBC he began discussing the interest rates on government bonds, which are now hovering at close to 0% for many of the world's developed economies, and he had to stop and chuckle for a moment when thinking about the ridiculous nature of this concept.

I have studied bubbles in depth going back through hundreds of years of history. I have discussed how investments move through four stages of a bull market cycle:

I want to take a look at an investment class now that has entered this fourth stage. This is always the most fun point to watch in a market because to the casual observer, the media, and the average financial advisor it not only appears that nothing is wrong; they fall all over themselves to say that you should invest in it. 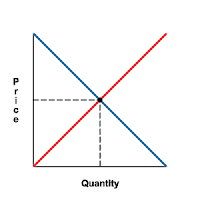 You know an asset has reached the mania/bubble stage when you begin to see the supply of the particular asset move higher alongside an equal if not greater spike in price. The first lesson in economics tells you that this is the exact opposite of how supply/demand should exist alongside price.

However, when the mania sets in and prices continue to rise, people always, always, always come to the conclusion that "this time is different." They will find an unlimited amount of reasons to justify the price increases.

When looking at the NASDAQ Internet stocks in the late 1990's there was a steady stream of Internet IPO's that entered the market. During the final stage it turned into a flood where hundreds and hundreds and hundreds of new companies were entering the market with no earnings and the future promise of "eyeballs" and "clicks," two very common terms used back in those days. They flooded the market with an enormous supply of shares and those shares rocketed higher in price.

Broadband companies that installed underground wiring were priced to deliver wiring in every square inch of the planet (even though 70% of our planet had no need for broadband cables underground). They began installing cable underground in areas that could never use it. The price of the stock surged alongside the supply of new cables put down. It was a mania in every sense of the word and as stock prices roses higher and higher there were an unlimited amount of analysts explaining how "this time was different." The idea of supply vs. demand was now irrelevant.

Then stocks collapsed in March of 2000.

We moved on next to the real estate market where the supply/price dynamic was far easier to see, yet the rising prices blinded those inside the bubble almost worse than the NASDAQ bubble. A home builder in northern Virginia where I was living during the peak of the insanity built 9 spec homes for one buyer. The buyer had no plans on closing on any of the properties. He planned to do a simultaneous closing for each property and pocket $50,000 in appreciation for each one. The enormous supply of empty homes going up coincided with massive increases in price month after month. Realtors told buyers that "this time was different."

Then home prices collapsed in February of 2006.

You can see on the chart that the supply of treasury bonds has become parabolic in growth, similar to IPO share issuance in 1999 and new homes being built in 2005. If you provided this chart to a freshman level economics major and ask him to draw a corresponding graph in terms of price, he would provide you with something like the following. The red line would show supply increasing, and the blue line would show prices falling as supply moved higher. 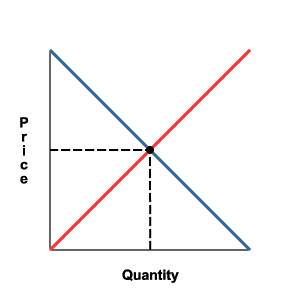 The following graph is the actual price of 10 year treasury bonds going back 220 years. Treasury bonds are not touching new highs to represent the danger of this growing supply, they have recently moved below the all time record low yield in history set back in the 1940's. When interest rates fall it means the price of a bond, the underlying asset, moves up in value. Treasuries are more expensive today than at any point in the history of the United States. 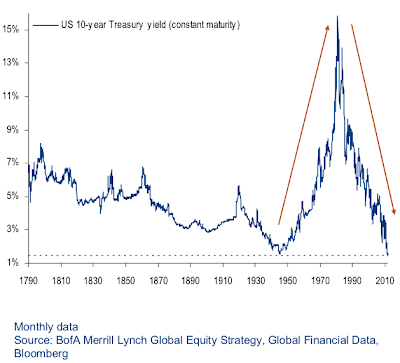 The following is the front page of the most recent addition of Barron's magazine. It asks, "What's The Best Bond Fund For You?" 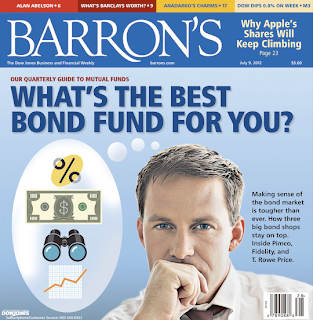 The average American, since the financial crisis erupted in the fall of 2008, has slowly and steadily removed their money from stock funds and piled into bond funds. They are terrified of the stock market falling again, and they are moving into the asset class that their financial advisor says "may have a small return but at least it won't fall in price." The following chart shows the amount of money leaving stock only funds ($545 billion) and entering bond funds ($630 billion) since January 2007. 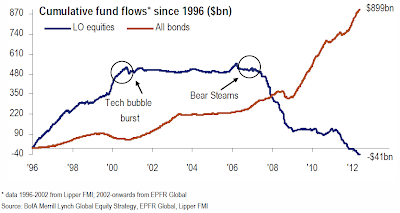 In 2011 long dated treasury bonds were up over 30% (remember bonds appreciate in value when rates fall). They were one of the best performing assets on the planet.

Treasury bonds have risen in price so far and for so long (30 years) that people cannot even remember a time when yields rose (and bond prices fell). People hear that the United States is adding another $1-$2 trillion in supply every year for at least the next ten years and they want more; just as in 2005 when they heard that home builders were selling an endless amount of empty homes to speculators and they wanted more. The rising prices have put a calm, a numbing feeling, into everyone in the market.

When interest rates begin to rise, and I assure you that they will, it is going to cause more damage to our economy and the savings of investors than the stock market bubble of 2000 and the real estate bubble of 2006 combined.

As treasury bond yields rise so will yields on corporate bonds, municipal bonds, mortgages, and commercial real estate cap rates. Everyone that has priced the 10 year treasury bond into their financial model looking forward is going to be slaughtered.

If interest rates double on a 10 or 30 year treasury bond it means the value of your investment has been cut in half. The average investor has spent the last four years putting their savings into the safety on an enormous time bomb. They will be slaughtered.

When will the mania end? I have no idea. Is it worth dancing on an atomic bomb for a 1.5% return on your money per year? That is up to you. It does not sound like an attractive idea to me. The downside is endless, the upside is extremely minimal.

This same exact story is taking place on the shores of Japan and the UK, and I believe their debt bombs will explode before the United States. But why wait to find out? For 1.5% per year? It is like guessing where to put your money: Spain or Italy. Why put it into either one?

Get your money out of harms way, and if you are very brave and very patient then place a bet on the short of the trade. Those that have the ability and staying power to hold a short position on these debt markets, such as now legendary hedge fund manager Kyle Bass who has an enormous short position on Japanese debt, will be the new subprime characters in Michael Lewis' next novel.

For more on where we stand in the current stock market cycle see P/E Ratios: Stocks Priced For Collapse.