One of my favorite writers/economists/financial minds in the world today is John Mauldin. He wrote the an excellent book discussing secular cycles in financial markets released this year titled The Little Book Of Bulls Eye Investing, and he writes a must read free column that is released every Saturday morning on his website here.

One of my favorite topics to study, along with the psychology involved with investment decisions, is the history of the financial markets and its participants. I am a firm believer that you cannot know how to navigate the future unless you have taken the time to learn in detail what has transpired in the past.

The major reason for this, as we have discussed numerous times using numerous examples here in the past, is that markets move in cycles. This is due first and foremost is to psychology. A secular market, which usually lasts 12 - 20 years, moves through four stages:

By studying the definitive work on this subject titled Manias, Panics, & Crashes: A History Of Financial Crisis you see that this trend has been taking place for hundreds of years through all types of investments. It has taken place in stocks, bonds, gold, commodities, and tulips.

Mauldin has come to the conclusion that over the last 100 years, the average stock market cycle has lasted 17.6 years (somewhat spooky - to the month).

The reason it takes so long for a market to move through a cycle and eventually bottom out is because it takes a long time for the psychology of the market participants to move from mass euphoria to mass pessimism back once again to optimism.

The bull market in stocks that began in late 1982 and ran through March of 2000 was so great that it still has a lingering effect on investors today. The sentiment in the market today, a full 12 years into our current secular bear market in stocks, is far greater than it was during the lows of 1982 (where most portfolios held 0% of their assets in stocks). The sentiment is in a higher range today than most of the last 100 years.

We can see this through something called the Price to Earnings ratio, which essentially means the price an investor is willing to pay for a stock based on the earnings of the company. If P/E ratios are high it means an investor is willing to pay more for a company based on the speculation that it will grow its earnings or more investors will enter the market and push the P/E ratio even higher (known as the greater fool theory).

Before we look at this concept further it is important to understand that this topic applies to almost every investment. It can be seen in commercial real estate through cap rates, which are a measure of the return investors are willing to pay for the annual income on the property. It can be seen in the bond market through the interest rate investors are willing to accept in return for the risk of lending their money to a company/government/etc. for a specific period of time. Commodities are more difficult to determine an exact valuation because they have no return. They still move through secular cycles for reasons I will be discussing.

The following chart shows the secular bear market from the year 2000 to present day. 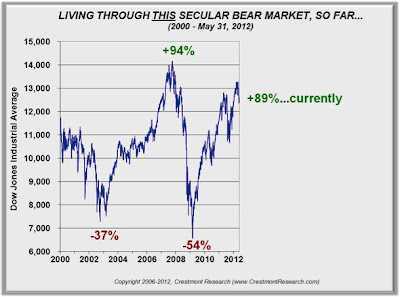 An interesting fact that Mauldin points out in his Little Book is that stocks tend to go up just as much as they go down during a secular bear market. In other words, 50% of the time they are rising.

What tends to happen in bear markets, and this current one is no exception, is that there are long slow rises in the market where complacency enters the mainstream psychology. The market rises over many years creating an environment where it feels like things are once again "different." When the market falls it tends to happen very quickly over a short period of time. This has the effect of catching most market participants on the wrong side of the trade. When investors finally give up and everyone gets back into the market, it collapses again soon after (this is what is taking place today).

The next chart shows the last secular bear market from 1966 - 1982. It shows that the market was rising over 50% of the time, which created confusion during every leg up (especially at the tops) that "this time was different." The falls came swiftly, crushing those that let the optimism enter their psyche. 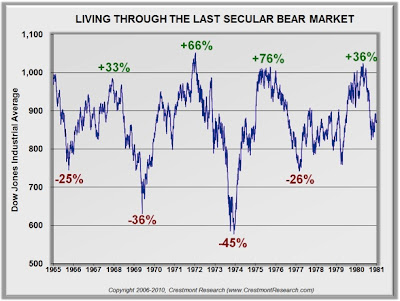 While these charts help us see both the past and where we stand in the current cycle through the present, they only present one side of the equation: price. In order to understand value, and how close we are to a market bottom, we must apply price to earnings.

The following chart shows the secular bear markets over the past 100 years and where the P/E ratios bottomed to end the cycle. Every previous bear market ended with a P/E ratio at 10 or under. We are currently at 22 today, which is still is mania territory (where most bear markets begin) based on history. 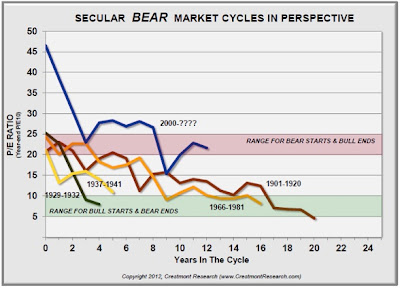 This means investors are still willing to pay extremely high prices for stocks based on earnings assuming that an investor will enter the market in the future and purchase the stock at an even great price to earnings.

What do I believe?

I believe that not only will this bear market end with P/E ratios back under 10, as all markets in history have in the past, but earnings are also going to collapse from their current lofty levels. This takes down both the numerator and the denominator in the equation setting the stage for the grand finale of this current bear market which may end up as the worst in history.

Based on Mauldin's work of the 17.6 year cycles, we have 4.9 years remaining until we reach this ultimate low. At that point, just as they did in 1982, investors will want no part of the stock market. At P/E earning ratios down at 10 or below they will sell stocks assuming that prices will only move lower in the future. This will be the buying opportunity of a lifetime.

Astute investors at this point will be wondering; if money is flooding out of the stock market, where will it move to find a home? Cycles overlap and for every bull market where pessimism grows and money leaves, there is a bull market where optimism grows and money enters. I will look beyond stocks in the days ahead and preview where I think there is both under and over valuation in other markets today.