Readers of this site were aware this was coming 18 months ago, but the Spanish economy is now in complete collapse. The 2 year government bond has crossed 7%, the 5 year is at 7.7%, and the 10 year is at 7.6%. The government cannot continue to fund itself at these interest rates and will only survive with another bailout.

The regional governments within Spain (think of the member states for those that live in the US) are now lining up one after another to request a lifeline from the Spanish government. They have a massive amount of debt that will not be able to rollover/refinance without help from the government.

The banking system within Spain is also on life support through the government and the ECB. They are insolvent to the tune of hundreds of billions of euros and would cease to exist immediately if the life support was removed. A modern day bank run has spread across the country: 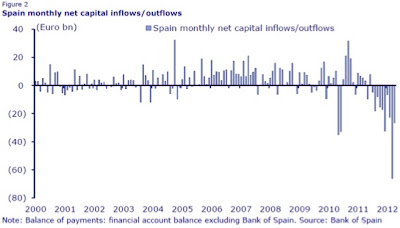 Again, we have discussed this moment arriving in great detail explaining the national government, the regional government, and the banking system's insolvency for close to two years and now it is here. For those that prefer a visual over data and charts, the following video quickly summarizes the current state of the Spanish economy.

We will continue to look forward in the weeks and months ahead here on the site to who is up next in the sovereign debt crisis and who is not yet on the radar. (hint: France and Japan)