US Real Estate: Where Is The Inventory?

I was reading through the Charlotte Business Journal this morning when I spotted a headline that read: CoreLogic: 19% of Charlotte-area mortgages are underwater.

With 1 out of 5 homes underwater Charlotte is doing much better than the national average, which has now moved up to 31% of all mortgages with negative equity (1 out of 3). The top chart in the graphic below shows this steady rise. 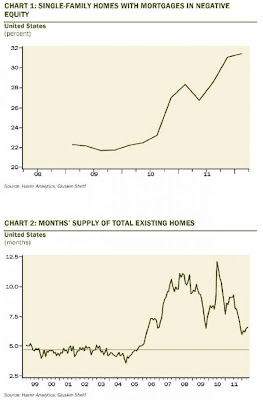 The implications for this simple statistic are obvious. A homeowner who is underwater cannot put their home on the market to sell without coming to the closing table with their own cash. For psychological reasons, most people refuse to use their personal funds (such as selling 401k money) to sell their home. They would rather just ride it out and "wait for prices to recover."

The rest of the underwater homeowners could not sell even if they wanted to because they don't have enough money to bring to the closing table to get a deal done.

The article goes on to say that another 8.3% of mortgages in Charlotte have "near negative" equity, meaning less than 5%. Why is this group important?

It costs 6% of the price of your home to pay a real estate agent to sell it. That means this next group of "near negative" equity is in the same situation as the first: they cannot come to the closing table without bringing their own money.

Adding the near negative equity means 27% of the mortgage holders in the city of Charlotte cannot come to the closing table without their own funds. While these home owners have the option of pursuing a short sale with the bank, I would be willing to guess that a large portion of these residents would rather just hope and pray prices rise allowing them to exit their financial death trap. This is just for the stronger Charlotte market. How many homes do you think are "almost underwater" on the national level keeping that inventory off the market?

I'll give you a hint: the majority of real estate purchases since 2008 have been funded through the FHA's 3.5% down payment program. That means all these buyers have been underwater the day they left the closing table. They need prices to rise 2.5% just to break even on the cost of a sale after paying their real estate agent.

In the meantime, with this underwater inventory being held off the market along with the regular shadow inventory (homes that have stopped paying their mortgages that the banks have not listed for sale) it has created a temporary artificial shortage in inventory. 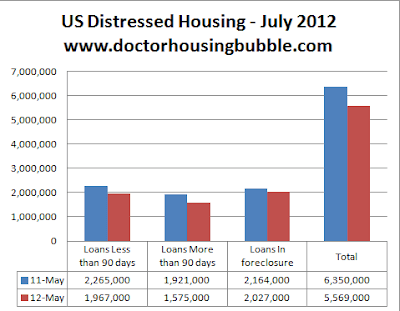 A friend of mine who sells new homes told me he had a phenomenal month in June. I spoke with a broker-in-charge at one of the major real estate sales offices just a few days ago and she told me that June was one of the best months they had in sales in years. There are bidding wars for a select few properties. 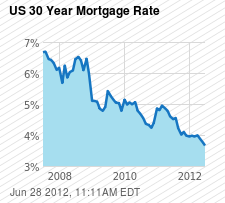 No one has told the buyers what happens when the 27% of underwater homes in Charlotte begin to walk away from their mortgages and those homes are then added to the real shadow inventory (which is still waiting to enter the market). No one has explained to them that the time to buy real estate is when interest rates are high and the time to sell is when interest rates are low (if you care about the price you are selling it for).

I will leave you with a piece from the following article from AOL Real Estate titled "Shadow REO: As Mandy As 90% of Foreclosed Properties Held Off The Market, Estimates Suggest." I very rarely cut and paste directly from articles, but based on the importance I wanted to provide just a small piece of their discussion.

The extent to which lenders keep their stock of REOs -- industry parlance for "real estate owned" properties -- off the market may be much larger than most people think.

As many as 90 percent of REOs are withheld from sale, according to estimates recently provided to AOL Real Estate by two analytics firms. It's a testament to lenders' fears that flooding the market with foreclosed homes could wreak havoc on their balance sheets and present a danger to the housing market as a whole.

Online foreclosure marketplace RealtyTrac recently found that just 15 percent of REOs in the Washington, D.C., area were for sale, a statistic that is representative of nationwide numbers, the company said.


Analytics firm CoreLogic provided an even lower estimate, suggesting that just 10 percent of all REOs in the country are listed by their owners, which include mortgage giants Fannie Mae and Freddie Mac as well as the Federal Housing Administration.


Daren Blomquist, vice president of RealtyTrac, said that he was surprised by his company's finding, especially since a similar analysis in 2009 found that banks were attempting to sell nearly twice as much of their REO inventory back then.


When a lender carries an REO on its books, it is allowed to value the home at the price that the foreclosed-on borrower originally paid for it. Once the lender sells the home, it must book a loss: the difference between the original purchase price and the current value. And since home values have fallen by nearly a third since the housing bust, that translates into huge losses for the bank.


If lenders turn their REO release valve to full blast, the deluge of foreclosures cascading onto the market could plunge the country into a recession, said Thomas Martin, president of consumer advocacy group Americas Watchdog.


"If they let the dam essentially break. It could be a catastrophic disaster for the U.S. economy," he said, predicting that some major banks would fail and home prices would nosedive by 20 percent.


That doomsday scenario has many industry professionals supporting lenders' tactics of holding onto most of their REOs. Otherwise, they would be "causing the floor to fall out from underneath the entire market," Faranda said.


For more on the false bottom in US real estate see Home Prices Have Bottomed, Again.