It seems like just yesterday I finished writing the Second Half Outlook For 2012 (released June 2), and the world has changed significantly since that point only two months ago.

After spending the first five months of the year discussing the danger and overvaluation in the stock market, finally in the month of May stocks turned down significantly and fell all the way into the beginning of June (my outlook marked the bottom almost to the day).

At that point I said that due to the sell off many of my favorite long term investments, energy and agriculture, were close to buying opportunities. Unfortunately, we never hit those levels, as oil took off with the stock market and agriculture has exploded higher due to the drought conditions.

I am writing this now to remind readers not to get frustrated that we did not hit the buying opportunity (and must now continue to build and hold cash while we wait). However, this explosive rally higher in stocks (and sentiment) over that past two months has brought us very quickly all the way back up to another opportunity: shorting stocks.

During this entire two month period the global economy, due in large part to the European slowdown, has continued to slow significantly. The UK economy has entered depression like numbers and the strength of its currency in relation to the euro (one of its largest trading partners) has crushed its manufacturing and export market.

China has felt the same blow from the slow down in Europe confirmed by a major slow down in export numbers released last night.

The following chart shows the diminishing returns in corporate sales and profits in the S&P 500 which have slowed significantly after the spike coming out of the financial crisis. 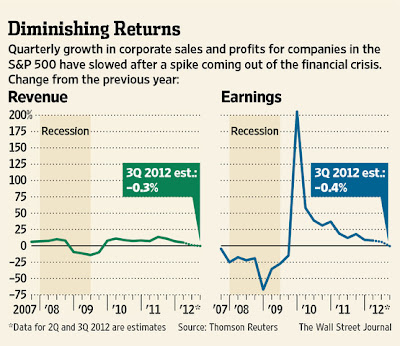 You would expect that with this back drop of data the market would be significantly lower than where we last checked in on June 2. The exact opposite occurred. The fundamentals of both the global economy and corporate sales have been discarded due to one overriding factor: the market now assumes and has priced in the Federal Reserve announcing monetary easing in the next few weeks to months.

The problem of course is that this expectation has brought food and energy prices along for the ride. It will now be very difficult for Bernanke to announce additional stimulus with the stock market just off its all time high, bond prices at almost record lows across the board, and commodity prices soaring.

The bond market has taken the bait. The following shows that the high yield bond market (junk bonds) are now touching down on support at all time record low yields (record high prices). Junk bonds see not only see a continuation of lower interest rates (from the Fed), but they have also completely discarded any chance of defaults in the future. 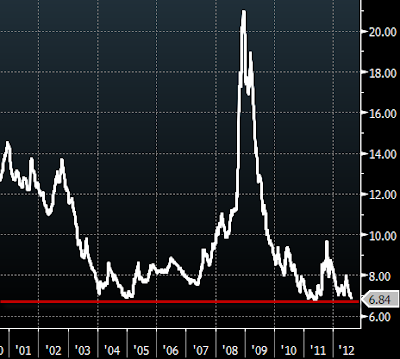 The stock market has taken the bait. In terms of sentiment, the AAII survey shows that stock market bulls rose to 35.6 this past week, the highest reading since April 5th. The bears fell to 27.4, down from 34.9. These reading are not as extreme as the beginning of the year in terms of overly bullish sentiment but they show a drastic turn around.

In addition to the anticipated white knight arrival of the Fed, the market has priced in a bottom and rebound in housing along with all the economic benefits that come with that scenario. I have discussed the data numerous times in the graph below but to see it in visual form is truly staggering. The top line shows the total percentage of under waterhome owners in America (now standing at 31.4% of all mortgages). The red line shows the percentage that are currently delinquent (10.1%). Click for larger view: 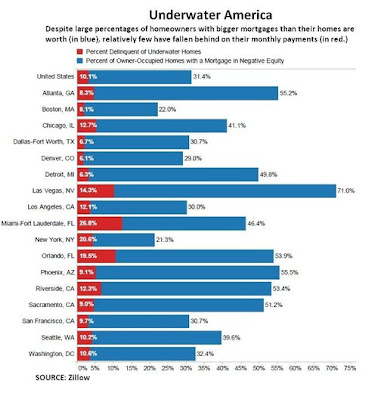 This means that 21.3% of all mortgages in this country are under water but still making a mortgage payment. 1 out of every 5 homes! What are these people doing? How long will they hold on? How soon before someone tells them they can stop making payments and live for free while they wait for foreclosure and then either work out a deal with the bank or, (gasp!)......rent a home.

100 million Americans in this country are now receiving welfare - social security and medicare not included in this group. There are only 311 million people in America total. How long before this number moves to 80, 90, 100% of the country? Is that sustainable? 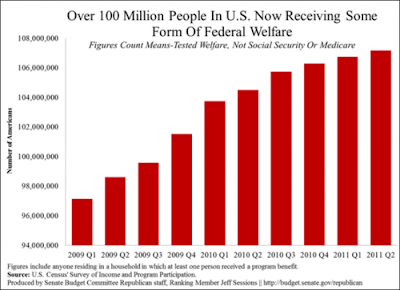 US debt to GDP is now over 100% and rising fast. The US deficit is rapidly approaching $16 trillion. Obama promised in August last year (during the debt ceiling debacle) to find $1.2 trillion in cuts to our deficit. Our deficit grew by another $1.2 trillion in the year since that comment was made.

When calculating GDP, our government subtracts inflation out to determine the real growth (the most recent real GDP number showed the US only growing at 1.5%). The following chart shows what GDP growth would really have been reported over the past few decades if real inflation numbers subtracted from the total (using John Williams inflation numbers - how the government calculated inflation until 1982). 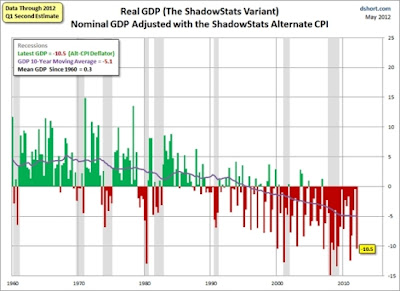 You can see that until about 1990 the "real" growth in America was strong. Then after 1990, and especially after 2000, the real numbers show the country in a continuous contraction. This is what is happening under the surface and why it feels like things are not getting better for the average person.

What I Am Doing Today?

During the last two months I have been steadily accumulating precious metals, mining shares, and rare earth companies as they have not participated in the rally (sentiment is rock bottom). I continue to wait patiently for opportunities in energy and agriculture because I do not like to chase assets when they are rising and sentiment is strong. Some of my favorite currencies have moved very close to buying opportunities (as the dollar continues to strengthen). I am close to the point, as I did during the beginning months of the year, where I am comfortable putting a short position on the stock market. If the market continues to rise, I will layer the short position in slowly over the coming weeks. For more details on these assets see: 2012 Second Half Outlook: Policy Response & How To Invest.

I am not a financial advisor. Please speak with one before making any investment decisions.