An Economic Growth Mirage: Income Levels Fall As The Cost Of Living Rises

Over the past 12 years the Federal Reserve has responded to two major market dislocations. The first was in March of 2000 when the stock market bubble peaked and subsequently crashed over the following two years. Interest rates were brought to "extraordinarily" low levels and held there for years in order to stimulate borrowing and spending as well as raise asset prices.

It worked. Not only did the stock market recover and move on to new record highs, but it took the real estate market with it. The Fed was praised as the savior of the economy and Alan Greenspan was known throughout the financial world as "The Maestro."

Then the impact of the Fed's loose monetary policy was felt in 2008 when we experienced a financial crisis where both stocks and real estate prices crashed simultaneously. The Fed, once again, has brought interest rates and monetary policy to "extraordinary" new levels.

We are now back in the eye of the storm. The period where the Fed is continuously praised for saving the global economy and Ben Bernanke has been honored as Time magazine's man of the year and dubbed "The Hero."

While the impact of the popping of the Fed's new bubbles will be felt soon, there is another problem that grows under the surface through this easy money policy. A large portion of the working middle class and poor do not own a home and own very little in stocks. Their level of financial health is determined almost exclusively by the wages they earn vs. their cost of living. 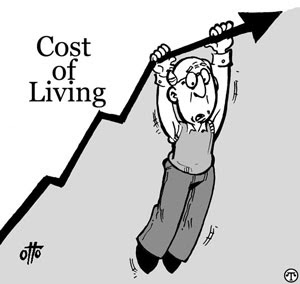 The Fed creates no real wealth with a printing press, only a mirage of higher asset prices that make some consumers feel more wealthy and more likely to buy, which is turn artificially and temporarily stimulates the economy. 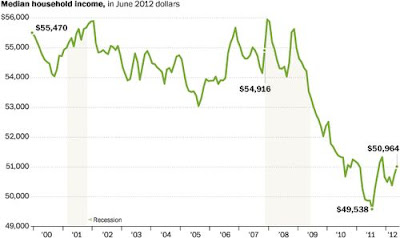 The next chart shows that while income has tracked sideways and fallen the monthly cost of living has continued to rise steadily. 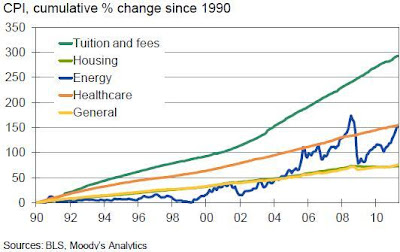 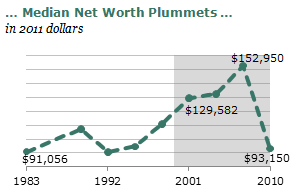 This past week the average price of gasoline reached the highest ever price point for that week of the year, topping even the gas spike of the summer of 2008. While there was outrage during 2008, there is hardly a mention of the rising costs today. People have just grown numb to the rising bills monthly, not understanding how printing press impacts their monthly bottom line. 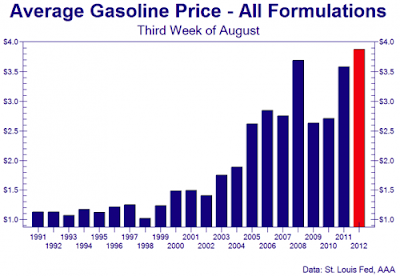 The price of agriculture, specifically corn, has surged over the past few months due to the terrible drought that has impacted crop growth. This is slowly working its way through the line of production and will be felt at the grocery store over the last few months of the year.

This process has created two economies. The wealthy that already own assets such as real estate and stocks benefit from the Fed's artificial stimulus that temporarily juices the number seen on their monthly bottom line. The second economy, the working middle class and the younger generation, feel no benefit from artificial stock price increases. They do not yet own a significant amount of assets in their portfolio and have a tougher and tougher time accumulating them as wages fall and the cost of living rises every month. 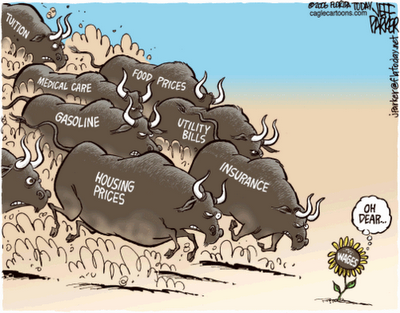 As I discussed earlier in the weak, this foundation of the economy, the working middle class, is cracking and breaking down setting the stage for a large scale collapse. While the process cannot be seen on a day to day basis with the untrained eye, over a long period of time the impact is clear. The United States is just a shadow of its former self in the 1950's when it was a manufacturing powerhouse with real wage growth and a strong savings rate.

The percentage of the middle class who say it is more difficult to maintain their standard of living today than 10 years ago has risen to 85%. 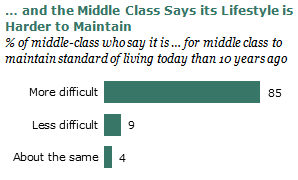 Fortunately, the invisible hand always finds a way to correct imbalance. As the US slowly disintegrates with the currency behind it, asset prices such as stocks, real estate, and even the beloved bonds will enter a period of "repricing." A lower currency will help America boost exports and collapsing asset prices will set the stage for what hopefully will be the next period of rebuilding and real economic growth.