The $15 Trillion Adjustable Rate Loan: Who Will Bailout Governments?

The total government debt around the world has now crossed $45 trillion. That is $45 trillion that governments have borrowed and promised that the tax payers within their countries will pay in the future.

The top ten largest debt countries around the world owe $30 trillion of this debt. What would create a problem with this situation?

Remember during the housing bubble when people used the term "adjustable" rate mortgage. Homeowners were not seen as being in trouble with their initial "teaser" rates during the first 1 - 3 years of the loan, it was when the loan became adjustable (and would adjust significantly higher) that some people began to worry.

The governments around the world have financed their debt through the same exact process. Over the next 3 years, through 2015, the top ten government debtors will have to roll over (refinance) 50% of their entire debt burden: $15 trillion dollars. 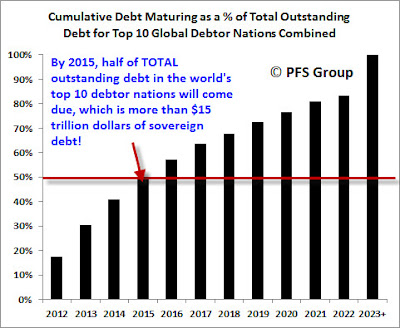 The entire housing market was $16 trillion in size back in 2006 and only a fraction of that amount was adjustable rate subprime loans (close to 50% of homes were owned free and clear and a large percentage actually borrowed what they could afford and took out 30 year fixed rate mortgages).

So if a small fraction of $16 trillion running into trouble took down the entire financial system, what will occur when an entire $15 trillion sum will need to be refinanced?

People's natural reaction is to say that "governments will bail them out." But wait a minute, it is the government debt that is about to implode. Greece, Spain, Ireland, Portugal, and Italy cannot go to their government for a bailout.

The answer is that it will come from the central banks. We are only in inning 2 or 3 of the sovereign debt crisis and it will pick up in size and magnitude as we move forward through Japan, the UK, and the United States.

The following shows the growth in size of the central bank balance sheets for the "Big 4" central banks since 2006: 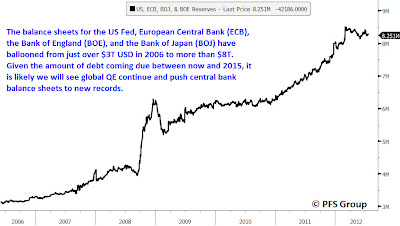 All eyes are on the Federal Reserve and the European Central Bank (ECB) over the next 48 hours to see what their announcements will be. The truth is that easing is going to come continuously from every major central bank around the world during the next three years. There is no other source of money available to refinance $15 trillion in sovereign debt, which does not even include new additional debt (borrowed through deficit spending) during 2012 - 2015 that will be incurred as these economies slow down. The US alone will add at least $3 trillion in new debt issuance during 2012 - 2015 and most likely much more.

On top of the $45 trillion in global government debt there is an additional $135 trillion in consumer, business, state and local, and bank debt. The world is drowning in debt and as the global economy continues to slow down, triggered from the European Union sovereign debt meltdown, it makes it more and more difficult to service the burden already in place; never mind even think about how the current global income will finance more.

While the chart above shows the global money supply exploding, the next chart shows annual world production of gold. It has fallen and moved sideways since 2000. 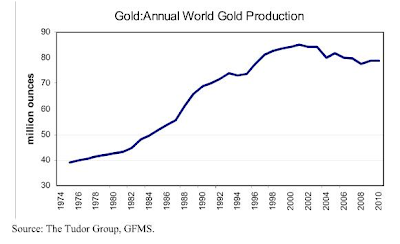 How will the largest period of central bank balance sheet growth (supply of money) over the next 3 years to finance sovereign debt needs combined with a stagnant supply of new gold impact the price of gold?

I will leave that up to your imagination. Keep the big picture in mind and do not be discouraged by short term price movements in the precious metals. If the paper price falls in the short term it only provides an opportunity to add a greater amount of physical metal. You will be very happy with the result by 2015.