I think it's a good time to buy certain Chinese stocks. 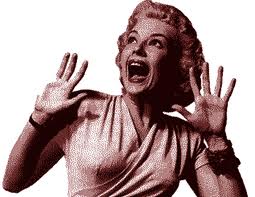 Take it easy. I knew that would be your initial reaction. 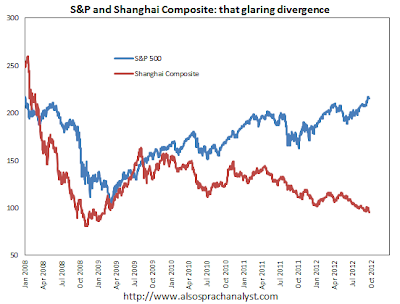 The market in China has been going down is for good reason (I have no explanation for why the American market has levitated back up into bubble territory).

The global economy has slowed significantly due to the European debt crisis. Europe is China's largest trading power and their demand slowing has a tremendous impact on China's growth. 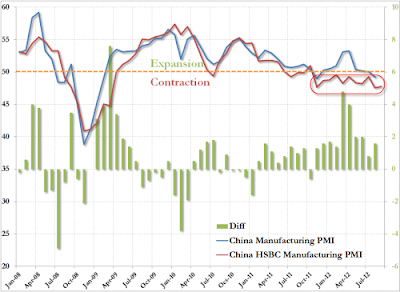 Their real estate bubble also appears to be finally popping. Estimates show that real estate directly impacts close to 25% of the GDP in China.

I came across this great map this morning, which shows the total debt to GDP of the largest economies around the world. You can see that Japan and the UK are the worst offenders. Many financial observers (including me) believe that these two countries will be next in line for a sovereign debt crisis. 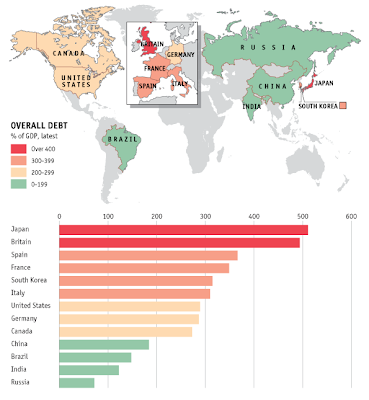 You'll also notice the developing countries in the chart marked in green. Brazil, Russia, India, and China (the BRIC's). These countries have much stronger balance sheets than the rest of the world.

What does this mean?

It means these countries have more room to stimulate their economies through government spending programs. I don't agree with this strategy (because it leads to your country turning red on the graph and setting you up for a depression which is coming for Japan, the UK, and the US), but its just what politicians do. Everywhere.

More stimulus means more growth in the short term, which is a positive for share prices. I think a large scale stimulus or money printing program is coming from China as their economy continues to slow down. They don't have an insane central banker that only cares about the level of the stock market, like America's Ben Bernanke, but they have a government that cares a great deal about growth and keeping their people working.

If this means building bridges to nowhere and empty cities they will do it. Also remember that China's people do not have a safety net that exists in the United States. They do not have 99 weeks of unemployment, social security, medicare, disability payments, food stamps, low income housing vouchers, and all the other programs that indefinitely support those that either cannot or just chose not to work in America (close to 25% of the country today).

This safety net is what has given Americans the psychological belief that they can spend every penny they earn and even borrow what they have not earned to purchase nice things today. There is no need to save for the future in America because politicians have promised that the government will always take care of everyone.

If the Chinese even implemented a fraction of this type of program (again - I not think they should, I am only speculating about what they could do) it would unleash an enormous amount of consumer spending in China. This would create a surge in their GDP. Remember, America built itself as the "largest" economy in the world based on borrowing and spending. It is now in the early stages of collapsing on itself due to this economic plan, but it has been a really good 40 year ride.

Where are Chinese stocks going in the short term? Probably lower. But I think they will be much higher in 3 years and sentiment is a rock bottom levels. Every investor around the world only cares about purchasing as much Apple stock as they can possibly own. The thought of buying in China is now an afterthought.

That is my favorite time to buy.