Obama's Stock Market During The Eye Of The Hurricane

As Obama prepares to take the stage for the final event of the Democratic National Convention outside my door this week in downtown Charlotte, let's take a look at how the stock market has performed from his inauguration speech on January 18, 2009 through today. As you can see, the stock market has had one of the greatest moves up in history during his tenure as president. The S&P 500 is now less than 10% away from the all time record high reached in 2007. 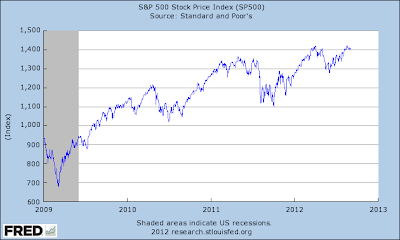 I wish, for Obama's sake, that he was giving this speech to announce that he was resigning from the presidential race and handing the election to Mitt Romney to take it from here. Those that study history will remember that during the 1930's, the last depression America faced, the stock market had a multi-year massive run up from the lows in 1931 to 1937. We know now that that period was only the eye of the hurricane as the stock market crashed down again in 1937, although it was less of a crash than the original fall seen in 1929.

It is my guess that we are about to experience the same thing only in reverse. I think the first crash in 2008 will be viewed as being more similar in scope to the one in 1937, and the crash that is ahead of us, the second leg of our current depression will feel more like 1929. The big one.

This crash will not appear in the same fashion as it did in 1929 because we were on a gold standard at that point, but in real terms it will end with the same result: a 1 to 1 relationship with price of gold and the DOW. With gold hovering at 1700 and the DOW hovering close to 13,300 it is my guess that some time over the next 4 years during this presidential term those two numbers are going to converge or come very close to it.

You can place your bets on whether that means going long gold or going short the stock market. I am doing both.

Since I need to be fair to those that love Obama (the chart above) and those that don't (the chart below), I present to you the "other" chart that has moved up significantly during his tenure. His contribution can be seen in the red portion of the graph below. 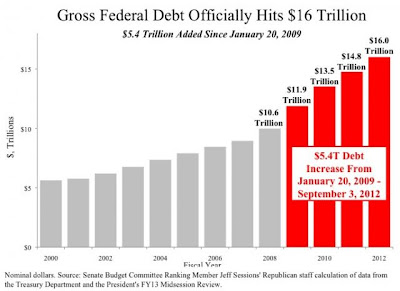