The Coming Bailout In Spain: Europe's Elephant In The Room

Great graph below tracking Spanish government bonds over the past two years. The 7% mark has become the psychological (and real world based on match) Maginot line where Spanish bonds enter full bail out territory. It is a question of when, not if, we will break back through that point again. 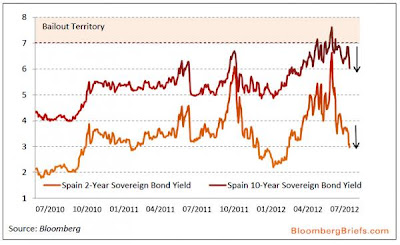 The reason being is that the Spanish economy continues to implode across every sector. There is a full run on basically every asset in the country right now. It has crossed the tipping point, and you can see from the chart below that the pace of outflow is beginning to accelerate. 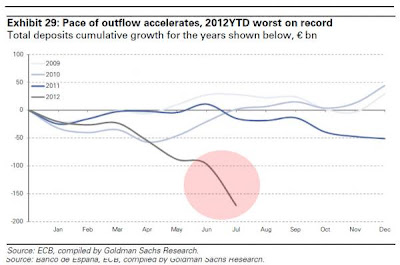 The total Spanish bank and government bond bailout estimates are impossible to quantify due to the fact that the situation grows worse by the day. What we do know is what will be needed is larger in size than the entire current bailout mechanisms in place in the Eurozone. Spanish leaders are meeting with the Germans right now to make sure they will have German support before they formally request a bailout. This formal bailout request will be needed before the European Central Bank can step in with force to provide "assistance", as they have with Greece, Portugal, and Ireland.

The dominoes are lining up right now behind the scenes, and they will begin to appear on the surface shortly. Most likely around the time Spanish bonds cross the Maginot line once again.