Why the herd, due to human psychology, tends to rush into a market close to its peak and not sell before its too late. This herd mania is actually occurring right now in front of us as the bond market is entering the mania stage of its bull market. Average investors are dumping the "risky" assets such as stocks, bonds, and gold to move into the "safety" of bonds. This has been taking place week in and week out since the financial crisis struck in 2008, which can be tracked with weekly TIC flows.

This has moved beyond the average investor in their 401k's to the big money tankers such as pension funds. The following shows the shift from stocks (white) to bonds (green) since 2003. 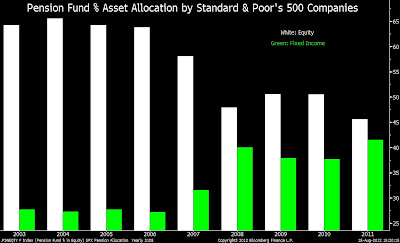 Junk bond yields dropped to an all time low of 6.74% this past Tuesday. Investors see no risk ahead in the bond market and are piling into the assets that deliver the highest annual return. The same is happening in the municipal market, even as cities begin to burn around them. Stockton, San Barnardino, and Mammoth Lakes have declared bankruptcy in California. A slew of others are hanging on to their last thread. Investors do not care because they have been told bond funds are safe.

In the corporate bond market the average interest rate on investment grade bonds has fallen steadily from late 2008. Investors continue to pile their money in. 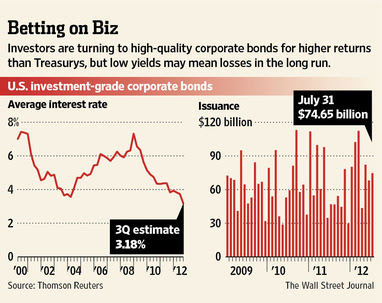 The ultimate madness is taking place in the long term treasury market where interest rates touched down at all time historical record lows over this past summer as the United States piles on mountains of additional debt it can never pay and is simultaneously diluting the value of the bonds through QE programs. If (when) interest rates finally begin their long move higher in the treasury market it will take the principle value of all other bonds down with it, as they are all measured in relation to the treasury yields (known as the spread).

This natural market cycle, where the average investor moves like a herd and is slaughtered over and over and over again, is taking place once again. It will happen again during the next cycle (most likely in commodities), and happen again during the following bull market (most likely stocks). The goal is to purchase early and steadily before the herd arrives and step away as the mania psychology sets in.