Earlier in the week we took a look at the falling share prices and extreme pessimism in the Chinese stock market in China's Stock Market Continues To Plunge: Buying Opportunity? Today we look at the mirror image of what has been taking place in China - the US stock market.

Up until recently the stock markets around the world were trading in lock step, a phenomenon known as correlation. Then in late 2009, seen in the graph below, the US market (S&P 500) began to diverge from Europe and China. These three regions represent the three largest pillars of the global economy. 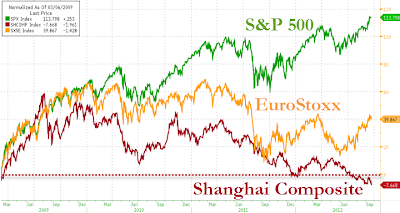 Those living in America have hardly noticed that the rest of the world has been deteriorating significantly over the last few years. They turn on the news, see the market went up that day, and assume that the global recovery is moving right on schedule.

The American market, however, has become an anomaly. There are three ways to look at this:

1. The American economy is recovering much better than the rest of the world and stocks represent this strength.

2. The global economy is doing much better than the non-American markets represent and they should soon catch up with the American stocks.

3. The American economy is drastically overpriced in relation to what is actually taking place in the world.

I believe the answer is number 3. The global economy continues to contract and in some areas it is contracting rapidly. So what ultimately has created this gap?

I have discussed many times in the past that money moves around the world, sloshing in different areas, in a borderless fashion based on numerous factors. Over the past two and a half years money has essentially been leaving the Eurozone in a non-stop relentless manner. Investors, businesses, banks, money markets, and even individuals have looked around at what is happening and they have sold both their bonds and stocks. They have even moved their cash. This money has needed a new home.

A large portion of this capital moved toward the United States. This is clearly represented in the tri-fecta strength of the US currency (the dollar), US stocks, and all US bond markets.

The same process has been taking place in China, although at a much slower pace, as their economy slows down and their real estate bubble begins to deflate.

What has this done? Created the false impression that the US is somehow immune from the global economy slow down. These same arguments were given back in late 2008 when analysts said that the rest of world would not be impacted by the US subprime crisis.

This false impression has led to euphoria in the US markets. Sentiment indicators are once again moving to extreme levels across the board.

The CBOE put/call ratio is now at the lowest point in over one and a half years. This means that investors are buying options (calls) that stocks will go higher. Essentially betting, with leverage, on higher prices. 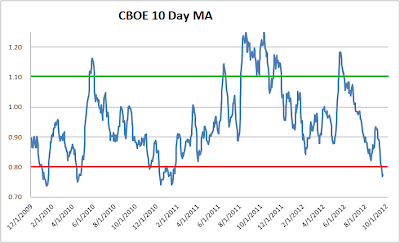 The Market Vane bullish consensus index is now higher than it was at the absolute high of the stock market back in 2007. It has crossed above 70% into the danger zone. 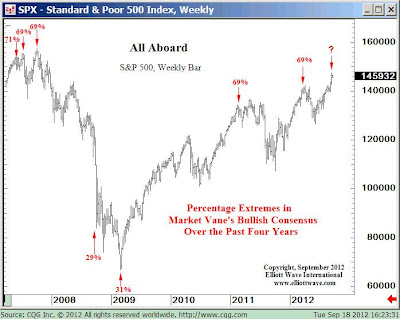 The NAAIM survey of manager sentiment has crossed back above 80; the opposite of what was seen during the September 2011 and June 2012 temporary bottoms in the market. 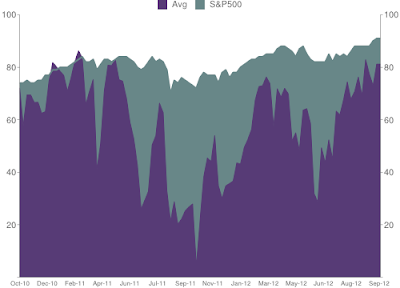 The AAII bull/bear ratio is rising rapidly toward recent extreme highs. This means there are far more bulls betting on higher prices. 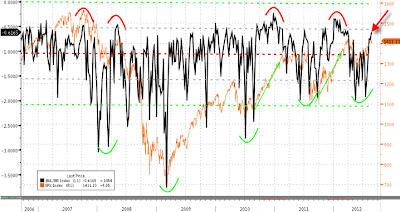 However, if you believe either scenario 1 or 2 above represent the reason for the markets to be behaving the way that they are then this is an incorrect strategy. Moving forward I will continue to discuss why the global economy will continue to contract even though Americans can only see higher stock prices which falsely justify a recovery that does not exist.

For a discussion on how the recently announced "QE To Infinity" program relates to stock market prices see The Dark Side Of QE: The Next Chapter In Our Story.