Japanese & US Citizens Positioned Perfectly Within The Next Bubble (Again)

Entering the late 1980's Japan was the up-and-comer to challenge the United States as the global economic power. Then the simultaneous bursting of a stock and property bubble in 1990, arguably the largest in history, have set the economy in what has become a permanent malaise of slow growth over the last 22 years and counting.

The United States, still the current owner of the largest economy in the world, has gone through the same process since what can be argued as the peak of US prosperity in March of 2000 when its stock market bubble burst. The US was different from Japan in that its property bubble burst on an a lag; coming 7 years later in 2007.

The connected link between the two economies since these bubbles burst has been the investment response from the citizens within the country. Japanese citizens, terrified of both deflation and losing money in "risky" assets have pumped their hard earned savings into Japanese government bonds to prepare for their retirement. The debt of the country, closing in at close to 240% debt to GDP (the worst in the world), is mostly held within the country by these steady savers.

This same phenomenon occurred in the US when the most recent property (and second stock market) crash came in 2008. American citizens, which we have been able to track through monthly TIC data, have moved money out of stock related investments in exchange for bond funds at a steady and relentless pace. Most of these bond funds own a significant portion of the funds in government bonds. America is echoing the Japanese blue print step by step.

This movement of money into the trust of the government, one of the most discussed on this website week after week, fascinates me to no end. An investment in a bond, in simple terms, is a bet on the the investment quality of the creditor you are lending money to. Bonds in both countries have been rising in value for a very long time so most people assume that a bond is as good as cash, only it pays a better return. Investors have no concept of losing principle value in bonds.

An investor purchasing bonds of a government are betting on the tax payers of that country being able to pay that money back, with interest, in the future. The government has no money. It is no more complicated than that, only the fundamental thinking behind this rational has been temporarily masked through the central banks of both countries, which now have a "guarantee" on the debt repayment.

Bill Gross, manager of the largest bond fund in the world at PIMCO, re-released his "Ring of Fire" graphic in his most recent newsletter. The graph shows the annual deficit on one column against the structural debt to GDP on the second. By plotting it along this graph it shows the most dangerous government bond markets in the world. 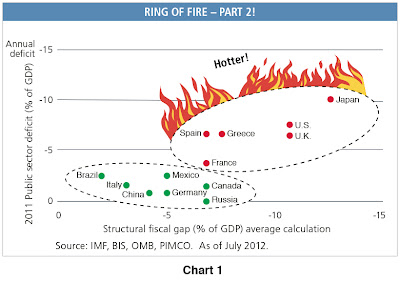 Japan on every possible scale is the worst in the world. Coming in at a close second are the US and the UK. This is why I believe that these three markets will be the next targets in the sovereign debt crisis when we have finished with Europe. I believe we will move from Japan, to the UK, and end with the US but it could come in any order as all three governments are bankrupt.

What has separated these three from the other offenders in the Ring Of Fire (Spain, Greece, France) has been the backstop of a single central bank; the promise to defense their bond markets with "unlimited bond buying."

It is for this reason that I think the next stage of the sovereign debt crisis will be far different than the first (Europe). We will finally see what happens when investors challenge a central bank. In both cases, America and Japan, the public is once again and unfortunately positioned perfectly for maximum pain where they least expect it.