Before I begin, let me say that unlike other big names in the media that were discussing the topic on Friday (such as Jack Welch) I do not believe there was some conspiracy on Friday to make the unemployment rate better for Obama's re-election.

The way unemployment is calculated was changed in 1994. It has been rigged ever since that point. This did not change on Friday, it has been this way for a long time for anyone who has been paying attention (and reading this site). 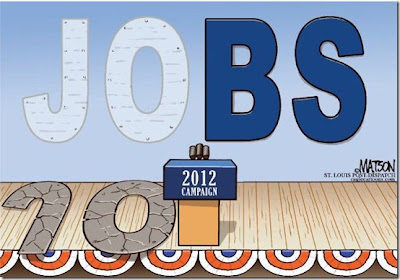 I'll also note that the most important event leading up to this election is not the jobs number on Friday, the debates taking place now, the amount of taxes Romney paid in 2010, or who plans to cut .00005% or .00004% of what is really needed to be cut out of the budget.

It was the announcement of QE3 a few weeks ago. By far.

Back to the unemployment numbers:

The household survey, which is the number used to calculate the unemployment rate, showed an increase of 873,000 jobs. The establishment survey only showed an increase of 114,000 jobs (a very big difference). There have been wide ranging speculations as to why this disparity occurred from college students deciding to get a job in September instead of going to school or the push back in hiring due to the farming drought over the summer. I have no idea what created it.

Either way, we are working with 873,000 new jobs. Of this group 582,000 were people who took part time jobs and wanted full time. A former executive at Bank of America who was making $150,000 per year took a 20 hour a week job at McDonald's. This has been a steady trend since the depression began back in 2007. High paying jobs have been lost to part time low paying service jobs. The government counts these people as employed because they worked at least an hour a week, even though these people still feel very unemployed while they continue to look for real jobs.

The following chart provided by Shadow Stats shows the different unemployment rates we will be working through. The first red line is the headline number you see reported by the government and the media. This is a complete farce. The next number, also reported by the government (U-6), adds in the group just discussed (part time workers who cannot find a full time job) and short term discouraged workers (they have been out of work for a short period of time but have given up looking for a job).

This U-6 unemployment rate remained at 14.7% this month. We are getting closer to the real data now.

The top line adds in one more category; the long term discouraged workers. After workers have been out of work for an extended period of time and want/need a job they are even removed from the U-6 table. Why is this important? The number of long term discouraged during the current depression is enormous.

What is the actual unemployment rate when this group is factored in?

Over the last year 2,867,000 Americans "left" the labor force (they gave up looking for a job). Most are collecting unemployment, food stamps, disability, or all three. The incentive to look has been reduced significantly and when they "give up" it makes the unemployment numbers look much better.

The ultimate goal would be to have everyone that is out of work give up looking. Then the unemployment rate would be 0%, keeping the over priced stock market soaring to new highs.