It's amazing to think back to where the world was only four short years ago on October 10, 2008. I'm guessing the financial markets were the first thing you thought of when you woke up that morning. What was happening?

The DOW plunged 697 points in the first five minutes of trading that morning. During the day it traded in a 1,000 point range. By the end of that Friday stocks had fallen 2,400 points in just 8 days - down 22%.

The markets were not correcting based on a news headline from that morning. They were correcting downward based on the artificial stimulus which was injected into the economy during the previous seven years. Think of it as a patient entering drug rehab and going through withdrawals. Stimulated markets have been known to ride the escalator on the way up and jump out the window on the way down.

Today that world seen in the October week of 2008 is long forgotten. The DOW is trading at 13473 as of this writing and a normal day now has less than a 100 point move. Complacency is higher today than it was during 2006 and 2007.

The following chart shows the movement in the S&P 500 during the entire secular bear market which began in March of 2000. 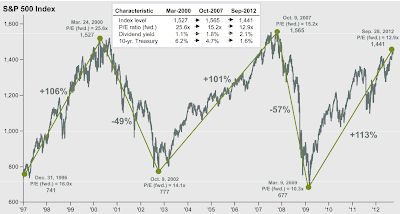 We now know that the markets were juiced back in 2001 - 2007 by low interest rates from the Federal Reserve, tax cuts, and government spending. This created an enormous credit bubble concentrated at its epicenter in the housing market.

During the current recovery we have seen the same "plan" used only on steroids. After cutting interest rates to zero the Federal Reserve has gone above and beyond and provided additional quantitative easing programs. Keeping the tax cuts in place, the federal government has unleashed trillions in annual deficit spending.

During 2006 and early 2007 it was obvious to many observers that this solution only created a mirage of recovery, ultimately leading to a much bigger problem when the drugs could no longer stimulate. Today it feels like we are once again at that 2006 - 2007 moment; the mirage has returned.

What happens when the drugs wear off again? You will see a hangover far bigger than 1929 and 2008.