Tracking Global Capital Flows: Who Is Buying & Selling US Debt?

It always interests me to watch where money is currently moving around the world, try to understand why it is moving in that manner, and then try to conceptualize how it will move in the future.

This process is similar to someone who watches weather patterns. If you have a fundamental understanding of how and why money is moving, you can almost feel where it will move next. This is why some of the best investment managers in the world are people that have studied the markets day in and day out for a very long time. Like golf and business, it is something you can practice and improve on almost your entire life (a major reason why I love the markets).

An area of capital flow that receives a lot of attention because it is the largest liquid capital market in the world is the United States government debt market. People want to know who is buying, who is selling, and why they are doing it. This market serves as an even greater interest to me because I personally believe the bonds today are priced at extreme bubble levels due to both the price vs. fundamentals behind the investment and the investment community's absolute assured belief that prices "can never fall." No risk models exist at major banks and financial firms that have US treasury bonds (and the US currency) falling in significant value in tandem (just as they did not exist for Russian debt in 1997, US stocks in 2000, US housing in 2008, European debt in 2010). It is the ultimate black swan.

So where is the money moving now as it pertains to this debt market? We can track this through data released by the government on who is buying bonds. The most recent release had some important data:

Japan was a major US buyer of treasuries. Why?

Japan has seen its currency appreciate significantly over the past year as investors have rushed out of European bonds and currency. Think of it as a bomb going off and money running away as quickly as possible. As with the US they have seen capital flow onto their shores looking for safety. As money flows in, euros are sold and the Japanese yen is bought. Then investors make investments within Japan using the yen.

This strengthens the currency, something that Japan does not want as its economy is slowing and they desperately need to boost their export market. To counter this, Japan has sold yen and purchased US dollars (and invested in US treasuries). This artificially manipulates their currency lower and simultaneously makes them a larger owner of US debt. Japan, one of the worst debt offenders in the world, will soon be the second largest owner of US debt (another one of the worst debt offenders in the world). If this process sounds very strange it is because it is. It is also known as a ponzi scheme, but don't get me started - we'll save that story for another day. They will soon overtake China as the second largest US debt holder in the world but still lag the Federal Reserve who recently became the largest. 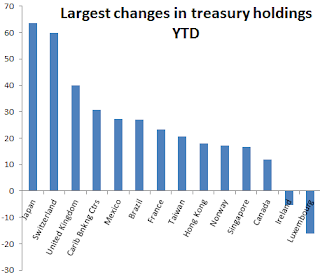 Switzerland was a major US buyer of treasuries. Why?

Same reason as Japan. Money is flooding into Switzerland as it leaves the Eurozone. The Swiss have pegged their currency against the euro (similar to how China has pegged their currency to the US). This means they must sell a massive amount of Swiss francs into the market in order to keep this peg. The US has once again become a major beneficiary of the temporary selling.

China has continued to sell treasuries. Why?

Great question. Perhaps the most important question of the decade. No one has a definitive answer, although there are is endless amount of speculation on the topic. I believe that since 2008, when it was revealed that the US Emperor actually wore no clothes, China has completely changed their fundamental shift on how they will invest toward the future. Their treasury holdings are down $125 billion year over year after decades of relentless purchases (leading up to 2008). 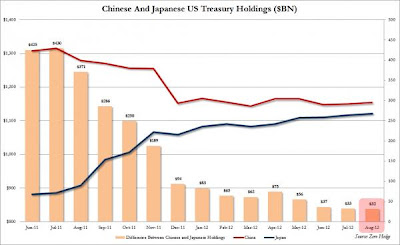 I believe that China has decided to re-direct this money to purchasing hard assets and tangible companies around the world (instead of a United States IOU they understand is worth nothing). They are one of the first countries to make this shift and it will pay dividends down the road when both the US currency and debt markets collapse. China, along with every investor in the world (including hopefully readers of this site), have the advantage of purchasing strong companies and hard assets at ultra low prices with over valued US paper while the Federal Reserve pushes the ponzi scheme out as far as possible into the future.

China is preparing for the moment when the global financial system is re-balanced, which will most likely occur with a Japanese, UK, US (or all three simultaneously) sovereign debt crisis.

Or perhaps they will soon join back in and began buying the IOU's from America. Time will tell, and I will continue to monitor the capital flows as they are released here.