Understanding The Waves Around You - Why Everything Is Moving In Cycles

Yesterday we looked at the wave structure of bonds and gold and where they can be found in their current secular bull market. For a review see Two Intersecting Bubbles: Future & Present - Gold & Bonds. The following chart summarizes this discussion in perfect visual form showing bonds entering the manic blow off stage where prices relative to value (and supply) have left the stratosphere. This is the point of maximum danger in ownership of an asset class. 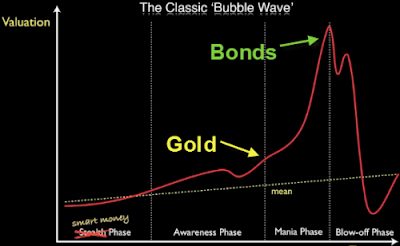 The chart also shows where gold stands in its secular bull market. After a 12 year run of continuous strong returns it will soon move out of the "awareness" phase of the cycle into the "mania" stage as the public finally enters the market (as they always do during the final stage).

When an investor understands this natural flow of a secular market cycle they have the ability to visualize where all the asset classes around them are located within the cycle. An investor's mental picture of the markets should look more like the following. A continuous stream of asset classes entering a blow off stage with a new market bottoming and beginning its secular journey. 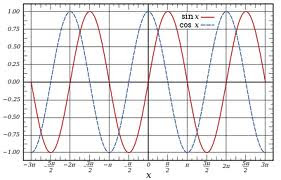 What is the benefit of understanding this process?

These secular markets last on average between 15 - 20 years. This makes investing a far easier process than most people imagine. There is no need to "day trade" or try to monitor a screen 24 hours a day to stay on top of where an asset class will be every 15 minutes.

I purchased my first ounce of gold at $560 and my first ounce of silver at $7.60. I made these purchases over 7 years ago after spending about a year studying financial market history, the boom/bust psychology involved in markets, and learning how markets repeat on a long term secular cycle.

I remember reading professionals at the time who said the secular bull market in precious metals would likely not end until sometime between 2015 and 2020 (based on the historical 15 to 20 year trend). After learning how paper money was backed by nothing, governments were bankrupt, and the economy was headed over a cliff, it seemed almost impossible for it to take that long for the world to understand what was happening and shift a portion of their assets into precious metals.

But here we are 7 years later and we are still in the process of "awareness." This boom/bust cycle is due almost exclusively to just two main factors:

1. The Federal Reserve's involvement in the financial markets creating temporary misallocation of capital that would not exist in a free market structure. As oceans of cheaply borrowed or printed currency rush from one asset class to the next it creates the boom and subsequent bust.

2. There is absolutely no financial education taught in the public education system. I left college with a four year degree and was never once taught about how to invest money, market cycles, etc. I did receive Economic textbooks trying to teach Keynesian economics. I was fortunate that I paid little attention to those poisonous books during school (due to distractions), and I was able to begin my study of finance and economics after graduating.

With this understanding in mind let's bring it full circle. We know that bonds are closing in on the peak of their mania and gold is preparing to begin its multi-year mania stage.

The following graph shows the ratio of US stock prices to average earnings for the preceding 10 years. This is known as a price to earnings ratio (P/E ratio) and it is the most popular tool used to determine the under or over valuation of stock prices. In other words, what are investors willing to pay for stock earnings? If they are willing to pay more for stock earnings then P/E ratios rise; it is a clear determinant of market psychology and sentiment. 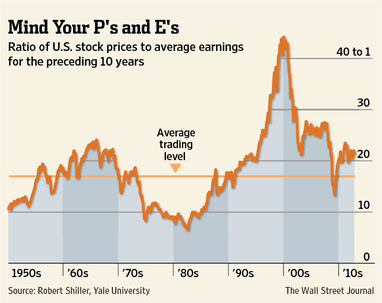 The orange line running through the center of the graph shows the historical average P/E ratio. You can see that other than a brief moment in early 2009, stocks have been "expensive" since the early 1990's. Right around 1996 is when they entered the mania stage of the most recent secular bull market which ended in March 2000. Since then stocks have been stair stepping their way lower in terms of price to earnings as investors slowly lose faith in the asset class. This is how cycles work on the way up and the way down.

Market bottoms occur with P/E ratios under 10, as seen in the late 1970's and early 1980's. We will get there again before this market reaches a bottom. It just takes time for the madness of crowds to wash itself clean of the euphoria which is still echoing from the 1990's. This moment, when investors throw in the towel and declare they will "never buy stocks again," will represent one of the greatest stock buying moments in history.

When will this occur? The current secular bear market began in March of 2000. Stocks tend to run on secular cycles every 17.6 years, setting the current bear market to end around 2017 - 2018.

How about real estate?

Real estate began a secular bull market in 1991 lasting through 2006; a 15 year run. It has been in a secular bear market now for 6 years, and it most likely has a few more years to run in order to clear inventory and have maximum pessimism enter the market (psychology of renting vs. buying which is already in full swing). Will real estate bottom before stocks? I have no idea, but they are both fully dependent on the continuation of the bond bubble (low interest rates) making it appear that they may bottom together.

For a much more in depth discussion on stock market cycles see: