The Coming Trouble In France

The Economist published an excellent article last week titled "The time-bomb at the heart of Europe." It was the article feature on the cover of the magazine focused on France with the following picture for the world to see. 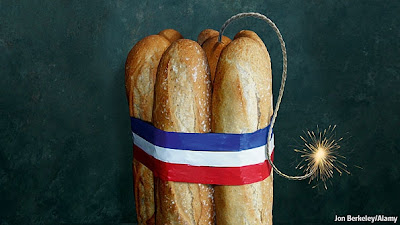 Following the release of the article French leaders were furious at the Economist for the story. I was both surprised they released it as well as intrigued by how well it is written. It is very rare, if even non-existent, that you see a mainstream news source publish an article about a crisis that is coming vs. a crisis that has already arrived.

While France was upset, everything in the article is completely true. Some of the more important headlines:

*The government debt to GDP has now risen to over 90%. The 90% mark is where Reinhart and Rogoff famously drew the line of danger in their incredible work This Time Is Different.

*Businesses are severely burdened by the new socialist government changes. There is additional product market regulation, social charges on payroll, and a higher minimum wage. This has discouraged most new companies from entering the market.

*Investment capital is being chased out of the country. There is an increased tax on companies, wealth, capital gains, and dividends.

Last week Moody's downgraded France from AAA to Aa1 status, an ominous sign for the future of the country.

The market currently has French debt priced to perfection (similar to the way they priced Greece, Portugal, Spain, and Italy before rates imploded almost overnight). The problem with this is not only the coming losses that will be taken by French government bond investors (composed in large part by European banks - a problems that would need a post of its own to explain), but that the Eurozone is counting on France to support the other bailouts in the region.

The pressure that trouble in France's bond market would put on Germany to support all of the Eurozone, which is already both unbearable and unsustainable, would certainly be the straw that broke the camel's back.

Keep a close eye on both the French economy, bond market, and political moves as we move into 2013. While the markets are currently calm, they could flair back up in an instant with trouble in Spain, Italy, or the currently unnoticed France.