The Dominance Of The Smart Phone Commercials On Football Sunday

I normally do not watch commercials (due to the use of tivo), but I have been out of town the past few weeks during football Sunday and have been watching the games at friend's houses, where I found that there are surprisingly people in the world that still watch things live.

What stood out to me was the staggering amount of commercials for both smart phones and tablets. The following chart from Barrons shows why. The smart phone market has essentially gone parabolic since 2009 and the tablet market has been picking up similar speed since 2010. This has come at the expense of the PC market where sales have stagnated and fallen.

I recently purchased the Samsung Galaxy S3, which I have enjoyed so far, and I am very interested in the new tablets that can convert to PC's when you flip them over. I plan on doing some research and perhaps will make a purchase soon on a new product in this market (after watching all the commercials on Sunday of course). 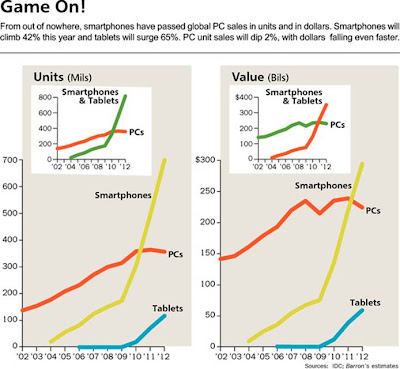