The Government Home Mortgage Bubble Is Beginning To Implode

I have been discussing this coming bailout and disaster for years now. In 2009 I wrote an article called The Four Headed Monster, in which I described the new role taken on by the FHA in the mortgage market and how it would ultimately lead to that headline.

While long time readers have known this was coming, we can review briefly where we stand today.

The following chart shows the breakdown of mortgage originations (the entity that provided the loan) going back to 2005. It shows that over 50% of loans created came from the private sector (non-government) during 2005 - 2006. At this point the government's share of the market was already extremely unhealthy (they provided the other 50%). Before 1997 the role of the government in the mortgage market was far less.

You can see that beginning in 2008, things went from very unhealthy to a complete communist take over. The private portion of the mortgage market (the orange section) essentially has disappeared. The government now controls everything. VA are veteran loans (red), GSE's represent Fannie/Freddie (blue), GN is Ginnie Mae (green), and FHA is the Federal Housing Authority (green). All are government programs. Click for larger image. 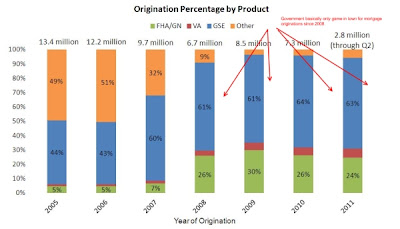 Fannie and Freddie, which should have disappeared completely or been drastically reduced in size during the summer of 2008 have stepped up and begun purchasing and insuring even more mortgages than they were at the peak of the crisis. However, they needed a third entity to step in and help carry the load.

The FHA has become the new de-facto subprime lender for the government. They kept their down payment program at only 3.5% as home prices were plunging, understanding that these loans would instantly move underwater. This allowed less financially intelligent buyers to step in front of a moving freight train and be decimated by the housing collapse. The tax payers were responsible for any clean up needed.

Now we are there. The next chart shows the loans insured by the FHA that are 90 days past due. They stepped in beginning in late 2008 to take over the subprime market and now those loans are beginning to default in mass. In September the number of serious delinquent loans rose to 738,991, which was 10% of their total $1.08 trillion in loans guaranteed. This only represents those are are 90 days past due. 17.3% of their total loans are delinquent. 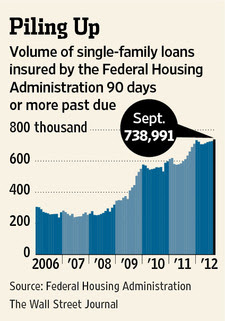 AEI estimates the current capital shortfall at $48 billion, a number that is rising fast.

This is the exact process I laid out in 2009 in The Four Headed Monster. Now we are seeing it live.

As a brief refresher, let's discuss for a moment what would happen if they government stepped away from the mortgage market (or only became 50% of the market again instead of 100%), something every mainstream analyst says would bring "the end of the world."

The cost of living for every person in the country would fall significantly. Instead of going into debt and making mortgage payments on a $300,000 home, a homeowner could rent until they had a large enough down payment to purchase that same home that now costs $50,000 to $75,000. Their 20% down payment would be reduced from $60,000 to only $10,000. Their monthly mortgage payments would be 3 to 6 times less than they are now and they could have the same home paid off well before retirement.

Instead of being a debt slave to the government or a bank for the next 30 years (or probably much longer) they could own their home free and clear and use their money to purchase other goods - stimulating the economy in a healthy manner.

Would this ever happen? Of course not, but I just wanted to show you how terrible the "end of the world" would be. Change only comes when we reach a crisis. Until then, enjoy the temporary home price bounce. I really hope the Fed can bring mortgage rates down to 0% and the banks can hold the shadow inventory off the market forever. It will sucker as many people into the market as possible back in before we reach the real price correction that is coming.

For a thorough discussion on how the real estate market will look over the next few years I recommend reading through:

*This will be updated as we moved closer to January 1 as part of the 2013 outlook.*