Over the past week we have had both a visual and audio analysis presented from Kyle Bass on what is coming for Japan in the years ahead. He laid out a full buffet of triggers that would ignite the black swan event in their bond market. 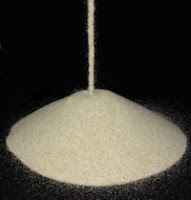 The truth is, as John Mauldin discussed beautifully in his book Endgame, the trigger is not one single event but a long chain of events that lead up to that moment. He compared it to pieces of sand that are dropped into a pile and begin to form a mini mountain. At some point you know that sand will have sort of an avalanche type effect and change shape. Some would look at the final piece piece of sand as the reason for the avalanche, but others would look at the entire structure and see that it was due to happen at any moment.

This is the state of affairs in Japan as we move forward week by week. After Bass finished describing the details of Japan in his most recent interview he was focused on emphasizing that he would not be naive enough to think he could call the exact time Japan would have its moment.

However, he sees the pile of sand in its entirety and understands that it is very vulnerable for an avalanche event. With that we can look at the moment recent piece that hit this morning; Bloomberg reports that Japan's exports have reached a three year low, and after two quarters of growth Japan is back in recession.

The following excellent chart shows just how far Japan has fallen from global dominance in 1986 when their share of US imports (blue) peaked at 30%. At that point China (grey) was just a sliver on the chart. China now holds 27% of the total. How the world has changed over the past 26 years. 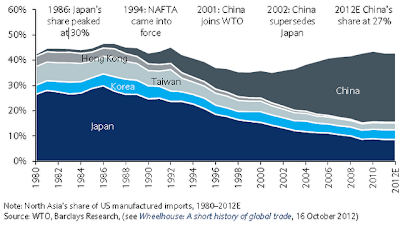